See Which Fighters Have Momentum Heading Into UFC Fight Night: The Korean Zombie vs Ige
By E. SPENCER KYTE, ON TWITTER @SPENCERKYTE • Jun. 15, 2021

Fresh off UFC 263 last Saturday, the UFC fight schedule keeps chugging along this weekend with a return to the UFC APEX for a quality card headlined by an intriguing clash in the featherweight division, as “The Korean Zombie,” Chan Sung Jung, takes on Dan Ige.

The card features a host of quality matchups and a collection of intriguing emerging talents, and there are a few athletes here that are certainly worth paying close attention to going forward, including the trio featured below.

This is the June 19 edition of Fighters on the Rise.

It makes me incalculably happy to see Davey Grant finally enjoying a successful, extended run inside the Octagon.

For the first five or six years of his career, the former Ultimate Fighter finalist couldn’t stay healthy, managing just four appearances between his TUF 18 finale loss to Chris Holdsworth and the start of last year. But after closing out 2019 by getting back into the win column with a split decision victory over Grigorii Popov, the persistent bantamweight fighting out of Bishop Auckland, County Durham, England registered back-to-back stoppage wins over Martin Day and Jonathan Martinez to pop back up as a potential dark horse in the 135-pound division.

This weekend, the 35-year-old Grant squares off with Marlon Vera in a rematch of their 2016 encounter, which Grant won by unanimous decision. “Chito” has improved considerably since that meeting, competing 13 times and collecting nine victories, establishing himself as an all-action finisher and Top 15 talent.

If Grant can extend his winning streak to four and secure another Performance of the Night bonus in the process, he could find himself with a number next to his name early next week, and a chance to take another step forward in the talent-rich bantamweight division later this year.

Regardless of how it shakes out though, it’s just great to see one of the genuine good guys of this sport finally getting the opportunity to compete consistently and making the most of it. 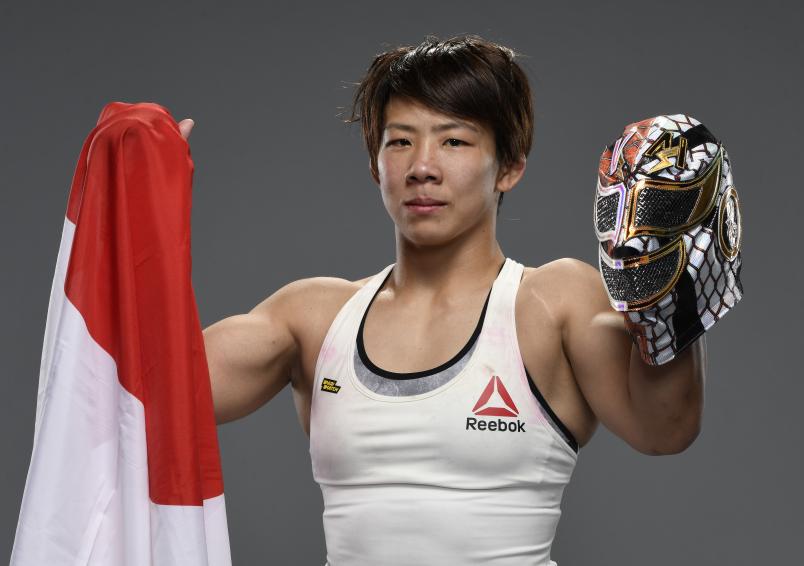 Kanako Murata of Japan poses for a portrait after her victory during the UFC Fight Night event at UFC APEX on November 14, 2020 in Las Vegas, Nevada. (Photo by Mike Roach/Zuffa LLC)

Kanako Murata is a 27-year-old grappler with a 12-1 record who has won eight straight fights, including claiming the Invicta FC strawweight title and defeating Randa Markos by unanimous decision in her promotional debut last November.

Those stats alone are reason enough to be paying attention to the Japanese prospect, who squares off with another former Invicta FC titleholder, Virna Jandiroba, on Saturday, but then you can add in that her idol is Kazushi Sakuraba, who once gave her one of his masks, which she then started wearing for her walkouts.

When Sakuraba gives you a co-sign, everyone should be paying attention; those are just the rules.

Murata, who splits her time between working at home in Japan and training with Kirian Fitzgibbons and the CSA crew, dominated her fight with Markos, sweeping the scorecards against the divisional stalwart, showing no sign of nerves and the kind of grappling ability that could carry her into the mix in the 115-pound weight class quickly.

This weekend’s clash with Jandiroba is a quality measuring stick moment for the UFC sophomore, as the Brazilian veteran is a little more experienced and has faced a steadier diet of top competition over the last couple of years compared to Murata.

With a shakeup at the top of the strawweight ranks earlier this year and the Top 15 constantly in a fluid state, another strong showing by the Japanese standout here could vault her into the rankings and position Murata for a marquee assignment in the second half of the year.

The guy most people call “Semi the Jedi” kind of crept into the UFC undetected last summer, registering a unanimous decision victory over Carlton Minus in a short notice pairing early in the night on August 22. He wasn’t a highly regarded prospect or representing a major gym, so the 28-year-old’s solid, workmanlike effort largely went unnoticed.

But then came his sophomore appearance in March and he made sure to introduce himself to the UFC audience, flattening Jason Witt with a counter right hand just 16 seconds into their welterweight class. It was a sonic boom to start the night and elevate the Maryland native onto the welterweight prospect watch list as he waited for his next assignment.

RELATED: Semelsberger Is Ready To Prove Everyone Wrong

This weekend, the former college football player squares off with Khaos Williams in a bout that has legitimate explosive potential, as Williams looks to get back into the win column after losing to Michel Pereira in an uncharacteristically tactical and tame contest on the last card of 2020.

Williams impressed with a pair of rapid finishes to start his UFC career last year, and represents a step up in competition for Semelsberger, who carries a five-fight winning streak into this one. Should he emerge from this potential Fight of the Night firefight with another victory in hand, the 28-year-old will take another big step forward in the division and earn an even higher place on that prospect watch list heading into the second half of 2021.