Make Sure You Know Which Fighters Are On The Rise Heading Into UFC Fight Night: Blachowicz vs Rakic
By E. Spencer Kyte, on Twitter @spencerkyte • May. 10, 2022

This feels like one of those fight cards where a couple unexpected or previously unknown names are going to be the talk of the Twitter-verse on Saturday night and Sunday morning; at least that’s what it feels like to me.

Now, I know I say these types of things frequently, but that’s how things shake out a lot of the time, and with the makeup of this weekend’s return to the UFC APEX, I think the blueprint is there for a couple of the newcomers and emerging names on this card to make a statement and thrust themselves into the spotlight this weekend.

While all eyes will rightfully and deservingly be on the main event, here are three additional competitors to pay close attention to on Saturday because they just might be the ones that steal the show.

This is the May 14 edition of Fighters on the Rise. 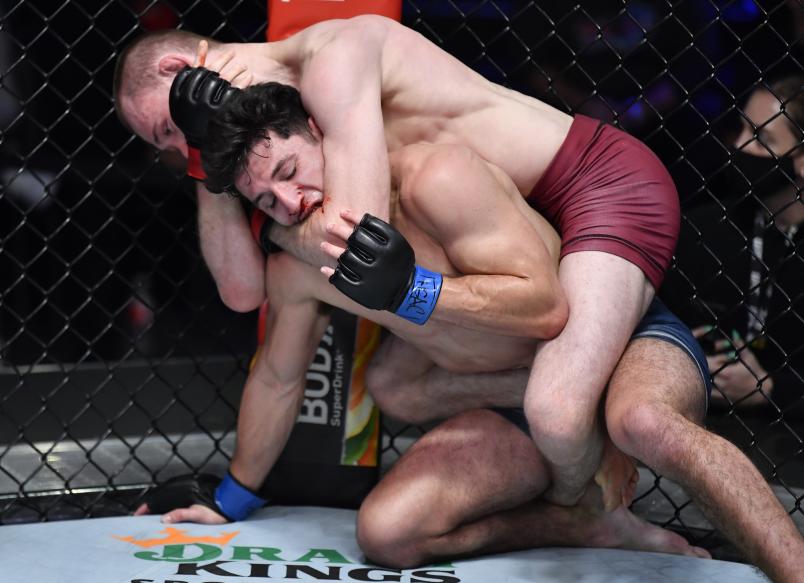 Hadley missed weight for his fight on Dana White’s Contender Series last fall, and sat in the back crestfallen as the UFC President explained that he had a rule about not taking fighters that failed to make weight, regardless of how well they performed.

And then he offered Hadley a contract, because the former Cage Warriors flyweight champion was that damn impressive in his victory over TUF 29 alum Mitch Raposo. Hadley broke down into tears, promised to never miss weight again and be a model citizen in the UFC.

After an injury forced him off the London card in March, the undefeated Oldbury native finally makes the walk for the first time this weekend, squaring off with Allan Nascimento in what is an ultra-dangerous instant litmus test for the unbeaten 25-year-old.

Hadley fought a quality slate on his way to the UFC, beating former Ultimate Fighter contestant Nkazimulo Zulu, Irish prospect Blaine O’Driscoll, and Luke Shanks before facing and submitting Raposo last October. Now 8-0 with six finishes, the standout grappler looks to make an instant splash in his new surroundings as he squares off with Nascimento this weekend.

The Brazilian dropped a split decision to Raulian Paiva during one of the all-Brazilian DWCS tapings in the summer of 2018 and returned from a three-year absence last summer with a first-round submission win on the Brazilian regional scene. He was then called up to the Octagon and battled Tagir Ulanbekov for 15 minutes, landing on the wrong side of a split decision verdict that many felt the judges got wrong.

This is an extremely difficult assignment for Hadley right out of the chute, but that’s what also makes it must-see TV. A win over an experienced, established hand like Nascimento is an instant indicator of where the unbeaten newcomer fits in the competitive flyweight ranks, and puts him on the fast track to facing ranked opposition.

Hadley is an exciting new addition to the roster and do not be surprised when he comes out looking to make a statement on Saturday. 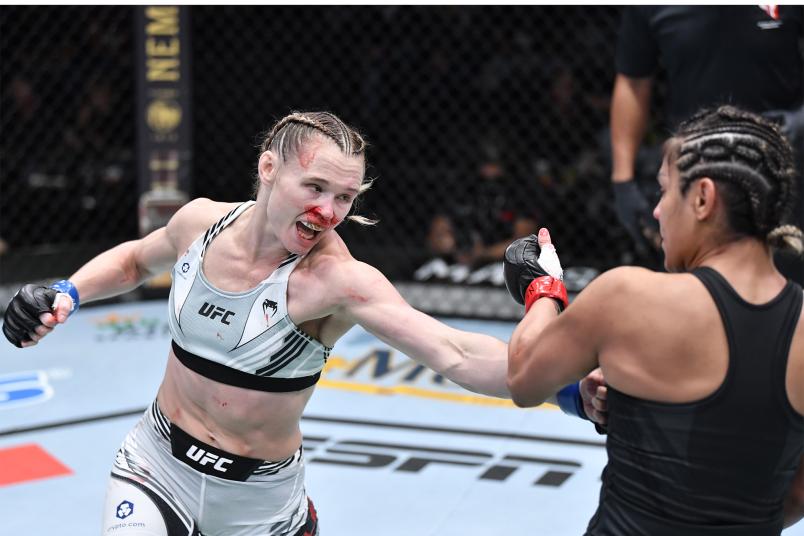 Following a couple difficult years inside and outside of the cage, Lee got things moving in the right direction again in 2021, turning in her best efforts since joining the UFC roster, sending her into this weekend’s clash with Viviane Araujo on a two-fight winning streak.

The former Invicta FC competitor and LFA champion snapped a three-fight slide with a second-round submission win over Antonina Shevchenko in May, clamping onto a triangle choke and adding in an armbar to finally get the tap late in the round. Six months later, Lee delivered her most impressive performance yet inside the Octagon, taking the fight to Cynthia Calvillo from the outset and earning a stoppage win between the second and third rounds.

The 33-year-old has been a fixture in the Top 15 since arriving in the UFC in 2018 and sports a 5-3 record that includes a couple narrow, and some would say questionable, split decision losses. She’s got things moving in the right direction again, and now faces Araujo in a bout that has the potential to catapult the winner into the title conversation.

Araujo has gone 4-2 in her first six UFC appearances, starting last year with a win over Roxanne Modafferi before dropping a decision to perennial top contender Katlyn Chookagian in May. She’s stationed one spot ahead of Lee in the rankings at the moment and is the kind of well-rounded talent that should force “KGB” to be at her best this weekend.

While there are a couple other emerging contenders a step or two ahead of Lee at the moment, another blistering effort against Araujo would close the gap on Alexa Grasso and Manon Fiorot and set her up for another marquee assignment — perhaps against one of those women — in the second half the year. 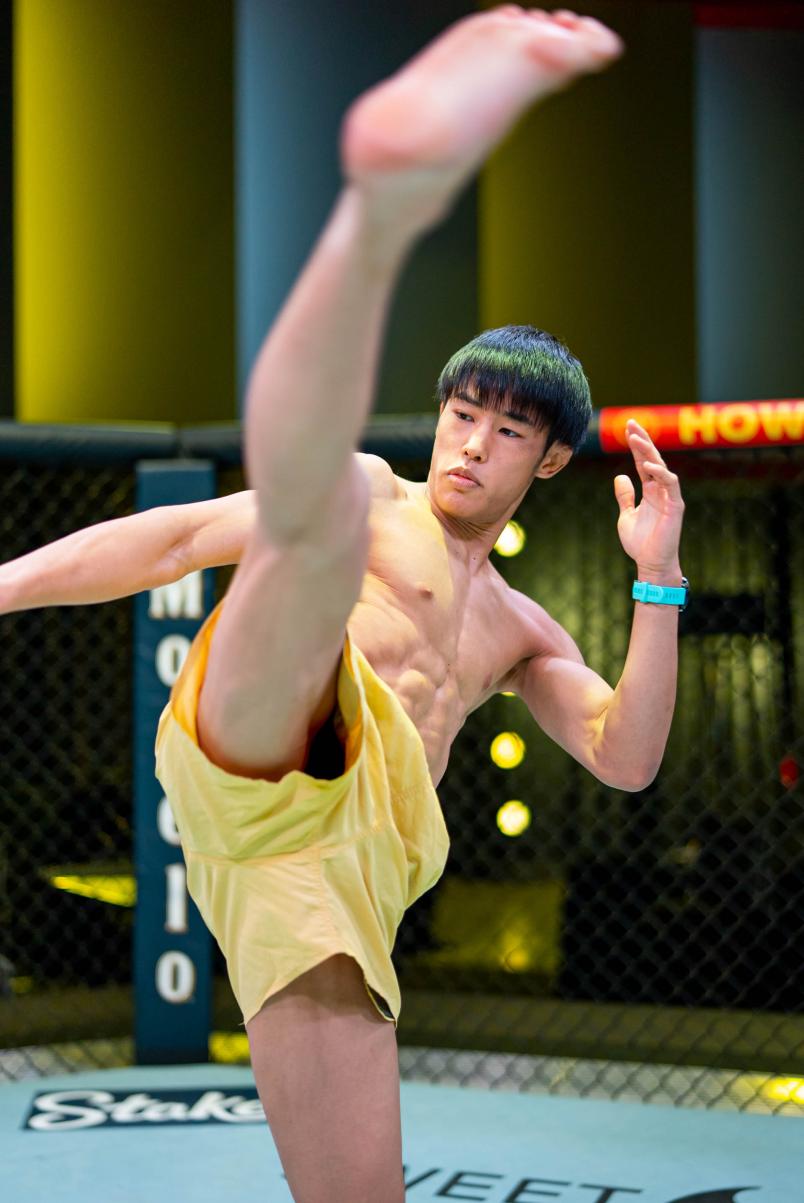 Originally scheduled to debut a couple weeks back before an illness a couple hours prior to their fight sidelined his opponent, the debuting Taira ticks all the boxes when it comes to being a must-see prospect in the mixed martial arts space.

After going 9-0 as an amateur, he transitioned to the pro ranks in the summer of 2018 and has proceeded to earn 10 consecutive victories heading into this weekend’s clash with DWCS grad Carlos Candelario. The 22-year-old Japanese flyweight posted a trio of first-round finishes in 2021, beginning with a submission victory over respected veteran Yoshiro Maeda before winning the Shooto flyweight title in July, and boasts good size for the division, standing five-foot-seven.

Now he arrives in the UFC, unbeaten, but already tested to a certain degree, eager to start making headway in the always-exciting 125-pound weight class.

Candelario earned a victory on the first season of Dana White’s Contender Series but did not come away with a contract. He returned to the annual talent search last season, dropping a split decision to Victor Altamarino on the first episode, but made history as the first fighter to earn a contract off a loss. The 30-year-old is 8-1 for his career and matches up well with Taira in terms of size, so this should be a solid test for the new arrival from Japan.

Flyweight is brimming with talent at the moment and the action in the division has been consistently entertaining, and the addition of Taira should only add to that in the coming years. He’s one of the most intriguing newcomers to make the walk this year, and folks should be paying close attention to his bout with Candelario on Saturday because he appears to have a very bright future.