Fighters On The Rise | UFC Fight Night: Barboza vs Chikadze

Another month of action inside the Octagon comes to a close this weekend at the UFC APEX with a compelling and competitive fight card headlined by an explosive clash between featherweight strikers Edson Barboza and Giga Chikadze.

Joining the ranked standouts from the 145-pound weight class on Saturday’s bill are the returning Kevin Lee and Daniel Rodriguez, who collide in what should be an intriguing clash in the welterweight division, and two pairs of Team Volkanovski representatives battling it out in the finals of the bantamweight and middleweight competitions from Season 29 of The Ultimate Fighter.

First up, mercurial veteran Ricky Turcios and young grinder Brady Hiestand lock up in a classic clash of styles and fighters with different levels of experience in the bantamweight division, and then Bryan Battle faces off with teammate Gilbert Urbina, who fills in for the injured Tresean Gore, to tussle in the middleweight finale.

Here’s a closer look at a trio of emerging names to play close attention to on Saturday night. 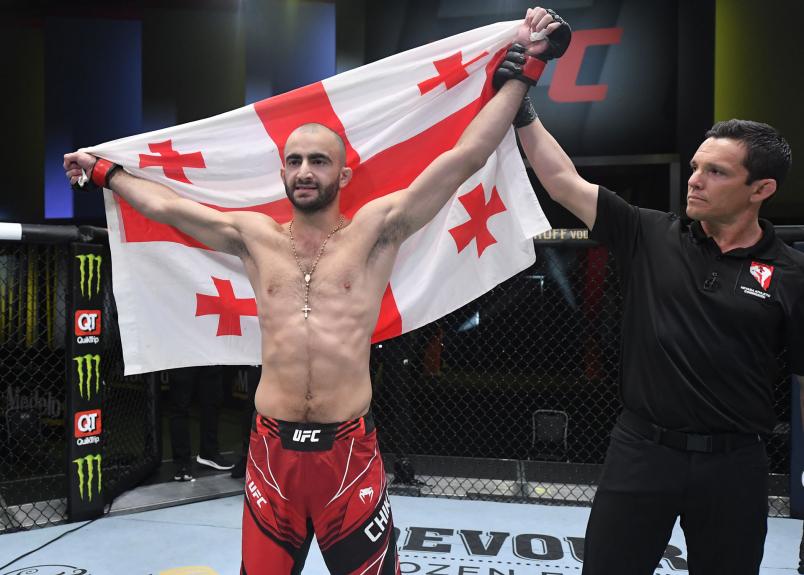 Giga Chikadze of Georgia reacts after his TKO victory over Cub Swanson in a featherweight bout during the UFC Fight Night event at UFC APEX on May 01, 2021 in Las Vegas, Nevada. (Photo by Jeff Bottari/Zuffa LLC)

It’s rare that you’ll find a main event competitor featured in this space, but what Chikadze has accomplished heading into this one mandates that he kick off this tetra-pack of up-and-coming talents to follow.

A standout kickboxer for a number of years who dabbled in MMA on the side to start, the 32-year-old Georgian transitioned to competing in the cage full-time in 2018, eventually finding his way into the cage on the second season on Dana White’s Contender Series. He lost that bout to Austin Springer, but hasn’t lost since, returning to the regional circuit to collect a pair of stoppage wins before getting the call to compete in the Octagon in the fall of 2019.

After split decision wins over Brandon Davis and Jamall Emmers pushed his winning streak to four, Chikadze really started rolling, following up unanimous decision triumphs over Irwin Rivera and Omar Morales with a first-round stoppage win over Jamey Simmons to wrap up a four-win year in 2020. The confident striker lobbied for a marquee opponent following the victory and his wish was granted, as Chikadze was paired with veteran Cub Swanson in his first appearance of 2021.

A minute into the bout, Chikadze hit “Killer Cub” with a body kick that caused him to double over in pain and the contest to be halted. It was a perfect shot and a second straight Performance of the Night bonus for the Kings MMA representative, who pushed his record to 13-2 and his winning streak to eight with the victory.

Chikadze’s rise hasn’t received as much attention as a six-fight winning streak in the UFC capped by consecutive stoppage victories would normally garner, in part because his early work was done in the shadows, but felling Swanson in vicious fashion and stepping in against Barboza in a highly anticipated main event changes all that. The Brazilian veteran has won two straight since dropping a debated split decision to Dan Ige in his divisional debut last spring and represents another steep step-up in competition for Chikadze on Saturday.

Less than two years into his UFC journey, Chikadze is on the precipice of title contention in the talent-rich 145-pound weight class, and if he goes out and beats Barboza in impressive fashion, he will be impossible to overlook as a contender heading into the final four months of the year. 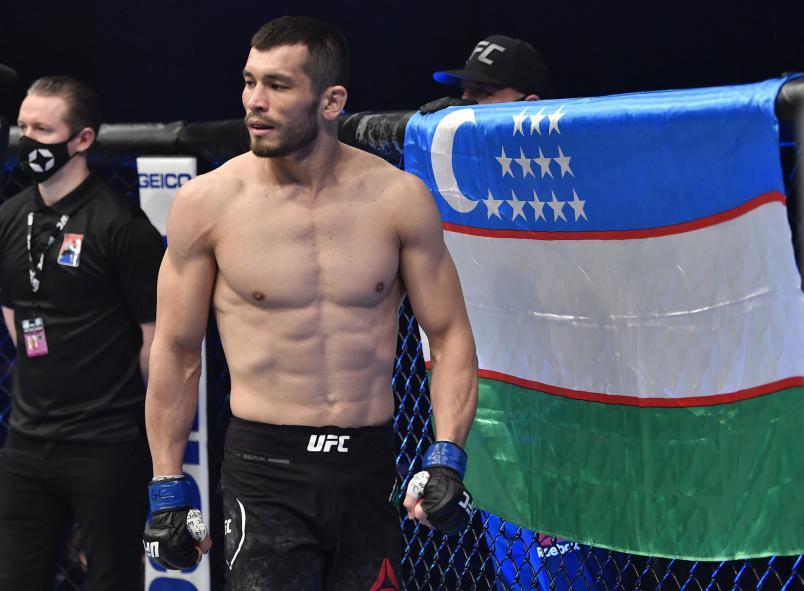 Each of Muradov’s last three victories have come inside the UFC Octagon, starting with a debut decision win over Alessio Di Chirico, followed by third-round stoppage wins over durable veterans Trevor Smith and Andrew Sanchez. More than a year passed between those last two triumphs, as opponent injuries, pandemic-related travel restrictions, and finally a positive COVID-19 diagnosis kept the streaking middleweight on the sidelines for the whole of 2020.

But Muradov showed no signs of rust when he stepped in with Sanchez in January, pushing a steady pace through the first two rounds opposite the former Ultimate Fighter winner before earning the finish just past the midway point of the final stanza after connecting with a flying knee and follow-up punches. Now 25-6 overall and 21-2 since beginning his career with a 4-4 record, “Mach” makes his Las Vegas debut on Saturday against another hardened middleweight veteran, Gerald Meerschaert.

“GM3” has seen it all over the course of his 46-fight career and is the kind of savvy, skilled submission artist that will make you pay for any mistakes made in a grappling exchange. He’s served as the litmus test for a number of emerging middleweight hopefuls during the course of his UFC run, turning back the likes of Trevin Giles and Deron Winn, while battling hard against talented up-and-comers like Jack Hermansson, Kevin Holland, and Khamzat Chimaev over the years.

This is a logical progression up the ladder for Muradov and a chance to showcase his abundant skills to a wider audience with a main event assignment on an ESPN-televised fight card from Las Vegas. If he comes away with a fourth consecutive UFC win, he could find himself sharing the cage with a ranked opponent next time out. 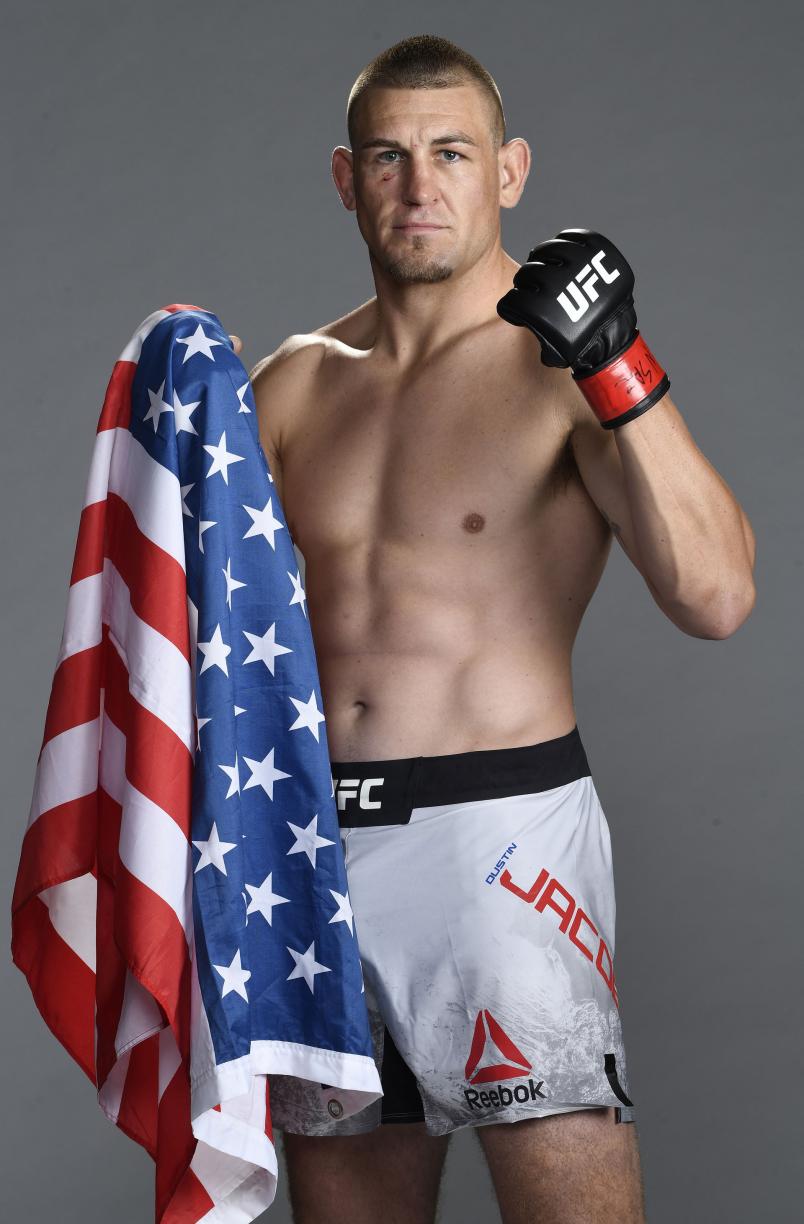 Dustin Jacoby poses for a portrait after his victory during the UFC Fight Night event at UFC APEX on October 31, 2020 in Las Vegas, Nevada. (Photo by Mike Roach/Zuffa LLC)

Dustin Jacoby had a cup of coffee in the UFC early in his mixed martial arts career, reaching the biggest stage in the sport after a 6-0 start before dropping back-to-back contests and being released from the promotion. A kickboxer by trade, Jacoby continued pursuing his MMA dreams until early 2015, when he decided to press pause and focus on his kickboxing career.

Four-and-a-half years later, “The Hanyak” turned up on Season 4 of Dana White’s Contender Series, starting fast, looking sharp, and steeling himself away to secure a unanimous decision win over Ty Flores and a second chance to compete inside the Octagon. Thus far, the now 33-year-old light heavyweight has made the most of it.

Jacoby secured his first UFC victory last Halloween, chopping down Justin Ledet with a series of heavy leg kicks midway through the first round, and followed that up with a unanimous decision win over Maxim Grishin in February. Last time out, the Factory X Muay Thai representative rallied back following a rough first round to earn a split draw verdict opposite Ion Cutelaba.

Saturday night in Las Vegas, Jacoby squares off with British grinder Darren Stewart, who makes his second consecutive start at light heavyweight. It’s another solid matchup for the streaking Jacoby, who enters five-fight unbeaten streak, and the kind of assignment where an impressive showing could elevate him up the rankings and the fight card next time out.