Fighters On The Rise | UFC Fight Night: Andrade vs Lemos

This is one of those cards where whittling down the list of competitors to potentially feature in this week’s edition of Fighters on the Rise was legitimately difficult because it offers a wide range of options.

There is Irish newcomer Dean Barry, who has earned three straight first-round stoppage wins ahead of his debut opposite Mike Jackson. There is former Top 10 light heavyweight Tyson Pedro, returning for the first time since December 2018 and yet still only 30 years old.

A case could be made for including three different sets of opponents — Maycee Barber and Montana De La Rosa, who are set to battle it out in what should be an exciting flyweight contest; Lando Vannata and Charles Jourdain, who could very well blow the roof off the UFC APEX in their featherweight engagement; and heavyweights Tanner Boser and Alexandr Romanov, each of whom could climb into the Top 15 with an emphatic effort this weekend.

As solid as the case for those eight options may be, the efforts of the three athletes that follow command a little more attention heading into this weekend.

Saturday’s fight card is flush with emerging talents, and these three are closing in on contention.

This is the April 23 edition of Fighters on the Rise. 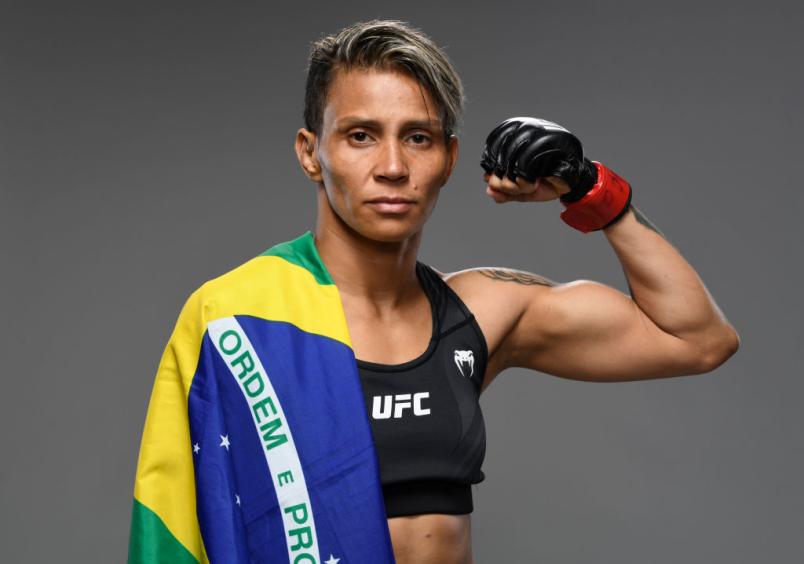 Amanda Lemos of Brazil poses for a portrait after her victory during the UFC Fight Night event at UFC APEX on December 18, 2021 in Las Vegas, Nevada. (Photo by Mike Roach/Zuffa LLC)

Lemos was one of the top breakout fighters of 2021, entering the year on a two-fight winning streak, but carrying little momentum or buzz, despite brandishing an 8-1-1 record and each of her last two victories coming against solid competition.

She started to open some eyes with her dominant first-round win over Livinha Souza in March, and really made people sit up and take notice with her 35-second knockout win over Montserrat Conejo four months later. Those victories carried her into the Top 15 and a showdown with divisional fixture Angela Hill, which she won by split decision to push her winning streak to five and move into the Top 10.

This weekend, the 34-year-old Brazilian lands her first main event assignment, squaring off against returning former strawweight champion Jessica Andrade in a bout with legitimate “top of the division” ramifications.

What has made Lemos stand out over the last year is her power — she can crack, and in a division where legitimate one-punch power is at a premium, her ability to connect and change the course of a fight with a single blow is eye-opening. Her performance against Conejo was extremely impressive, but the force of her blows was also the deciding factor in her fight with Hill as well, as the impact of her shots and immediate damage they produce are what shifted the results in her favor.

Saturday’s pairing with Andrade is a massive opportunity for Lemos to establish herself as a title threat in the 115-pound weight class. Andrade went 7-3 in her first strawweight run, claiming championship gold and only losing to others that have sat atop the divisional throne, and she was also impressive in her two flyweight wins.

Another victory would put Lemos on the short list of contenders in the strawweight division heading into the back half of the year and set her up for another marquee assignment next time out. 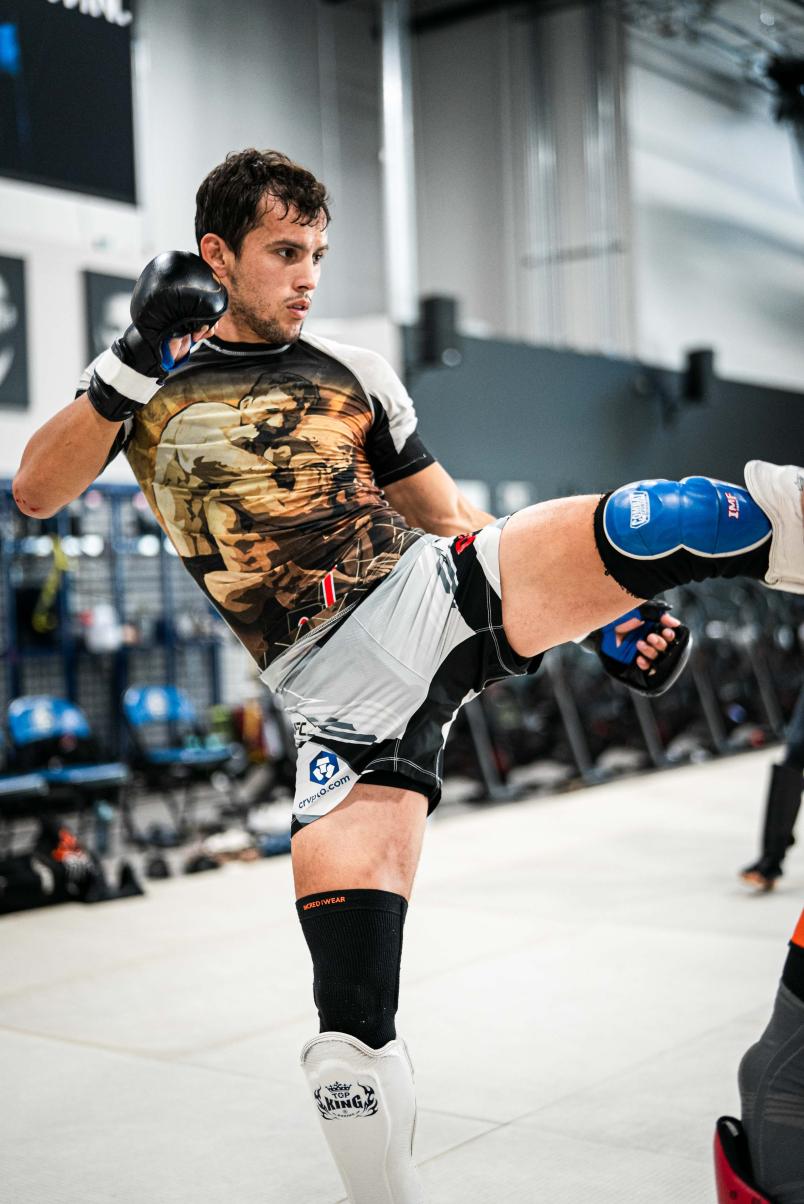 Puelles turns 26 just a couple days before stepping into the Octagon with Clay Guida on Saturday, and what better way to celebrate than by collecting the most high-profile win of your career?

The Peruvian lightweight enters on a four-fight winning streak and is bookended by third-round submission wins by kneebar. The first came all the way back in the spring of 2018 against Felipe Silva, when Puelles was still just a pup and seven months removed from losing to Martin Bravo in the finals of the TUF Latin America 3 lightweight tournament finals. He followed that up with a unanimous decision win in September 2019 but was then out of action until last summer.

Returning in June, Puelles controlled the action from start-to-finish against Jordan Leavitt, handing the Dana White’s Contender Series grad his first professional loss. Six months later, he stepped in with gritty veteran Chris Gruetzemacher and laced up his second kneebar finish in four fights, establishing himself as one to watch in the lightweight division in the process.

Currently training at Sanford MMA, Puelles has grown into his frame and noticeably filled out since his early days in the UFC, plus his confidence is through the roof.

This weekend’s matchup with the ever-game, ever-dangerous Guida is an outstanding measuring stick opportunity to see where “El Nino” currently stands in his development and whether he’s ready to take another step forward in the lightweight division. 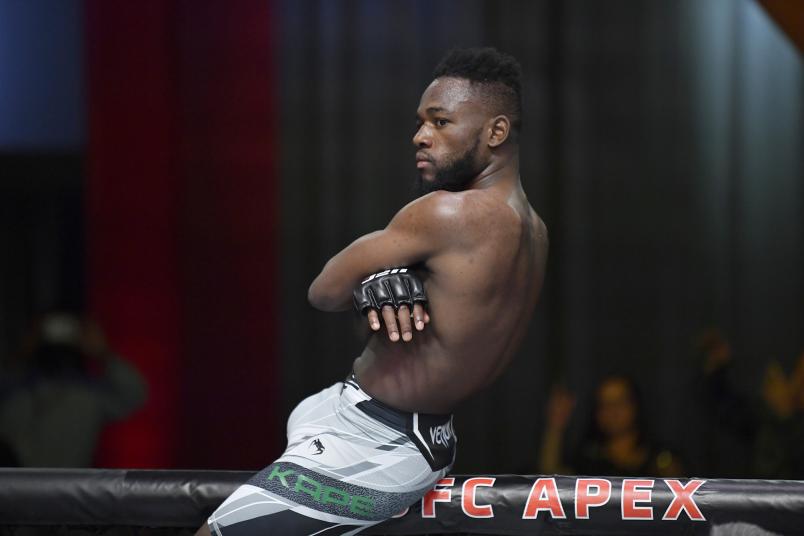 Manel Kape of Angola reacts after his knockout victory over Zhalgas Zhumagulov of Kazakhstan in their flyweight fight during the UFC Fight Night event at UFC APEX on December 04, 2021 in Las Vegas, Nevada. (Photo by Jeff Bottari/Zuffa LLC)

Kape was one of the more hyped new additions to the roster at the start of last year — a highly respected, explosive finisher who fought a tough slate during his time in RIZIN and closed out his run there by claiming the bantamweight title with a second-round finish of Kai Asakura.

He joined the UFC roster and wanted all that smoke, presenting himself as the uncrowned king right out of the gate and saying it was only a matter of time before he proved that was the case.

But he stumbled out the gate, losing a decision to perennial contender Alexandre Pantoja in his debut, and then making a quick turnaround and landing on the wrong side of a split decision verdict opposite Matheus Nicolau five weeks later to effectively deaden his momentum.

He got things moving in the right direction in August with a first-round stoppage win over Ode’ Osbourne in a fight where he failed to make weight, and then finally delivered a complete effort in early December, making weight before putting away Zhalgas Zhumagulov in four minutes and two ticks to bring his record to .500 inside the Octagon.

Kape’s sophomore season kicks off on Saturday with an intriguing assignment against Sumudaerji, a long, rangy, improving young fighter similarly looking to keep things rolling and climb up the ranks.

This is the kind of bout where Kape needs to show out if he hopes of landing the kind of marquee opportunity he was calling for on Twitter when the flyweight ranks were front-and-center earlier this year. He seems to have settled into life in the UFC and has looked like the guy everyone expected to see from the jump in his last two outings; now it’s just a matter of continuing to fight with that same sense of urgency and having the results match the bravado.