Fighters On The Rise | UFC 283: Teixeira vs Hill

Make Sure You Know Which Athletes Have Momentum Heading Into UFC 283: Teixeira vs Hill
By E. SPENCER KYTE, ON TWITTER @SPENCERKYTE • Jan. 17, 2023

For the first time since the spring of 2019, the UFC brings a pay-per-view event back to Jeunesse Arena in Rio de Janeiro, Brazil.

Saturday’s initial numbered offering of 2023 is headlined by a pair of thrilling championship contests. In the co-main event, Deiveson Figueiredo and Brandon Moreno meet for a fourth time to determine who will sit atop the flyweight throne, and in the main event, Glover Teixeira and Jamahal Hill face off for the vacant light heavyweight strap.

Prior to the championship pairings, a collection of athletes will cross the threshold into the Octagon, each looking to garner victory and make a statement. Some are established names looking to solidify where they stand in their respective divisions. Others are emerging competitors angling to kick off the year with a standout performance, while Mauricio “Shogun” Rua aims to close out his legendary career with one final triumph.

Here’s a closer look at three of the ascending competitors slated to compete this weekend. 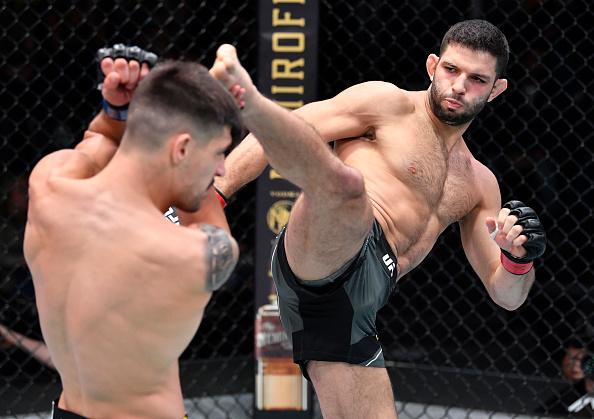 Thiago Moises of Brazil kicks Joel Alvarez of Spain in a lightweight fight during the UFC Fight Night event at UFC APEX on November 13, 2021 in Las Vegas, Nevada. (Photo by Chris Unger/Zuffa LLC)

Saturday is Moises’ tenth appearance inside the Octagon, and it feels like we still haven’t seen the best of the Brazilian lightweight.

Last time out, Moises snapped a two-fight skid with a first-round submission win over Christos Giagos, climbing onto his back and locking up a rear-naked choke. It was a reminder of the deft grappling skills the American Top Team representative brings to the table, which gives him the potential to be a dark horse in the talent-rich 155-pound weight class.

Originally scheduled to face Guram Kutateladze, Moises instead faces Melquizael Costa after Kutateladze was forced to withdraw for undisclosed reasons. The newcomer is 19-5 overall, riding a two-fight winning streak and has won seven of his last eight appearances, albeit against less seasoned competition.

This could very well turn into a showcase outing for Moises, who has crept into the rankings before and has the talent to do so again in the not-too-distant future. He’s a menace when he can dictate the terms of engagement and create grappling situations, and he should show that in Rio on Saturday night. 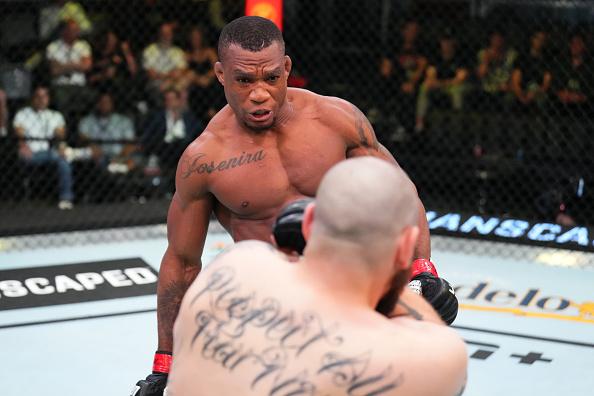 Jailton Almeida of Brazil kicks Parker Porter in a heavyweight bout during the UFC Fight Night event at UFC APEX on May 21, 2022 in Las Vegas, Nevada. (Photo by Chris Unger/Zuffa LLC)

One of the top newcomers of 2022, Almeida looks to begin his sophomore year on the UFC roster by garnering a victory over Shamil Abdurakhimov in a bout that has been put together twice before in the past.

A member of the Dana White’s Contender Series graduating class of 2021, “Malhadinho” earned victories at three different weights last year, beating Danilo Marques at light heavyweight, Parker Porter at heavyweight, and Anton Turkalj in a catchweight affair his bout with Abdurakhimov was scuttled for the first time. In each contest, the ascending Brazilian showcased his powerful grappling and excellent finishing instincts, dragging all three opponents to the canvas and finishing them on the ground in the first five minutes.

The 31-year-old powerhouse profiles as an intriguing addition to the heavyweight ranks, and a victory over the Abdurakhimov would likely vault him into the Top 15. Though he enters on a three-fight skid, the Russian veteran remains a dangerous threat and a considerable step up in competition for the second-year Brazilian, who will need to be wary of Abdurakhimov’s power and smothering top game.

After a terrific showing on the Contender Series and a banner rookie campaign, Almeida looks to begin his second year on the roster by extending his record to 4-0 inside the Octagon and push his winning streak to 13 overall. Should that come to pass, Almeida could find himself sharing the cage with a Top 10 opponent next time out. 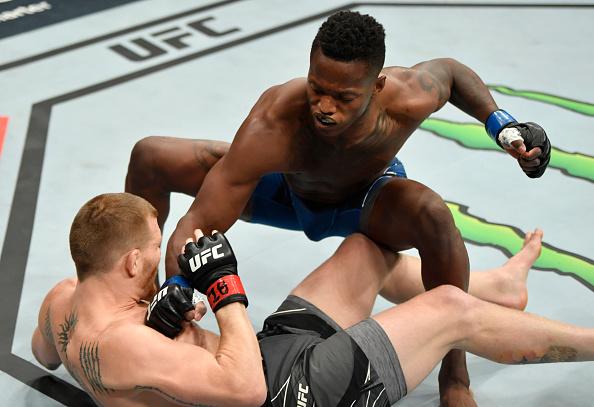 Terrance McKinney knocks out Matt Frevola in their lightweight fight during the UFC 263 event at Gila River Arena on June 12, 2021 in Glendale, Arizona. (Photo by Jeff Bottari/Zuffa LLC)

After starting his UFC career with a seven-second knockout win, McKinney collected a first-round stoppage win over Fares Ziam in his second appearance. Looking to capitalize on his momentum and potentially catapult himself into the Top 15, he jumped into a matchup with Drew Dober on short notice, and had the dangerous veteran on skates before ultimately getting stopped in one of the most chaotic one-round battles in recent memory.

The Spokane, Washington native got back into the win column in August with another first-round finish, collecting a submission win over Erick Gonzalez to push his record to 3-1 inside the Octagon and 13-4 overall.

McKinney is an excellent athlete who wrestled collegiately for a time before shifting his focus to mixed martial arts. He has clear power and sound finishing abilities, registering a dozen of his 13 career victories in the opening round, and enters 2023 as one of the top emerging names in the lightweight division.

Saturday at UFC 283, McKinney squares off with Ismael Bonfim, a member of the DWCS Class of ’22 alongside his brother, Gabriel, who joins him in making is promotional debut this weekend in Rio. The 27-year-old has won a dozen straight and 15 of 16, going the distance in each of his last three outings.

This is an intriguing assignment for McKinney and a good opportunity for “T.Wrecks” to get an early start on what could be a pivotal year in his progression up the lightweight ranks. He’s an outstanding talent that has shown flashes of top-end potential, and an impressive outing this weekend could create an opportunity for him to test himself against a more established name before the first half of the year is out.