Fighters On The Rise | UFC 275: Teixeira vs. Prochazka

Pay-per-view lineups remind me of massive music festivals like Lollapalooza or Coachella or Glastonbury, in that most people are familiar with the names atop the marquee, but the acts that hit the stage earlier in the night are usually lesser known, looking to work their way into a spot later in the evening and build their names a little more.

UFC 275 this weekend in Singapore serves as a perfect example, with twin title fights sharing top billing and a rematch of arguably the greatest fight between female competitors in MMA history hitting the Octagon before the gold goes on the line. Prior to those final three contests, however, there are nine bouts featuring competitors with varying degrees of UFC experience, making the walk into the cage in search of victories that will carry them further up the divisional ladder.

Dave Grohl of Foo Fighters talked about this when he appeared on Hot Ones, referencing the terrific band Alabama Shakes, who moved further up the lineup up each summer, catching his eye, until one year, they were closing out the show.

There are a couple fighters on this card on Saturday with the potential to make that Alabama Shakes-like rise through the fight card.

This is the UFC 275 edition of Fighters on the Rise.

Originally slated to face Warlley Alves in an instant litmus test debut, the former TUF Brazil winner was forced out of the pairing, leaving the 25-year-old Aussie newcomer standing opposite short-notice replacement Pete Rodriguez at UFC 270. Della Maddalena delivered the kind of performance you want to see from a promising new arrival in that position, battering the relatively inexperienced Rodriguez from the jump and putting him down in three minutes to pick up his first UFC victory and push his winning streak to 11.

This weekend, Della Maddalena squares off with Ramazan Emeev in a bout that feels comparable to his initial, uncompleted bout with Alves. The Russian veteran is 20-5 overall, 5-2 in the UFC, and the kind of well-rounded, durable fighter that should serve as a serious test for the promising sophomore from Perth.

While there are parts of Della Maddalena’s game that we’ve yet to see, what he’s shown thus far has been outstanding and provides plenty of reason to be optimistic about his future outlook inside the Octagon. Should he get by Emeev in Singapore, he should continue to climb further up the lineup card over the next several fights. 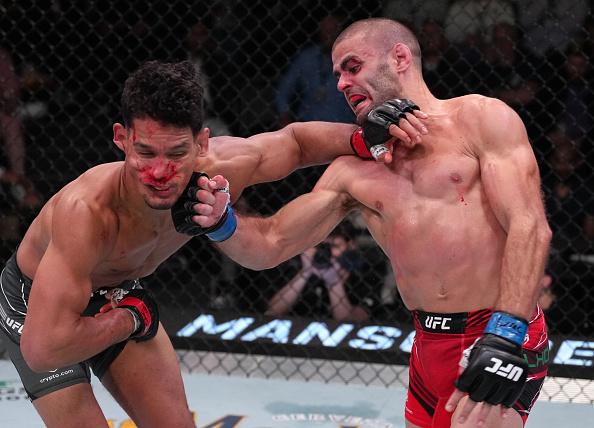 Fialho has already appeared in this space once before, and could honestly have landed here in advance of each of his first three trips into the Octagon.

The Portuguese welterweight, who takes on Jake Matthews this weekend, was highlighted ahead of his April 16 fight with Miguel Baeza, which he won by first-round stoppage, and then followed it up with a quick turnaround and second consecutive first-round finish against Cameron VanCamp three weeks later. Having debuted in the UFC in January with a short-notice loss to Michel Pereira, Fialho is poised to step into the Octagon for the fourth time this year in Singapore, giving him a very good chance of establishing a new record for number of appearances in a single year.

What stands out about Fialho right now — besides the fact that he keeps making this three- and four-week returns — is his composure in the fray and the gnarly power he possesses in his hands. He showed in that debut outing against Pereira that he’s confident enough to stand with a surging contender and won the opening round before the Brazilian took control, and his wins over both Baeza and VanCamp came in bouts where Fialho took a couple good shots before landing his own telling blow.

Saturday’s matchup with Matthews is another step up in competition and his first pairing with someone that may not willfully stand and trade with him in the center of the cage. The Australian veteran — who is still only 27, despite debuting in the UFC eight years ago — is an excellent athlete and high-level grappler that has started to play to his strengths a little more in recent outings.

Fialho has already established himself as one to keep a close eye on in the welterweight division as a result of the torrid schedule he’s keeping and impressive performances he’s already submitted this year, but a win over Matthews would further elevate his profile. The Sanford MMA product looks like he could be a contender in the 170-pound weight class in the not too distant future, and he could further confirm that on Saturday. 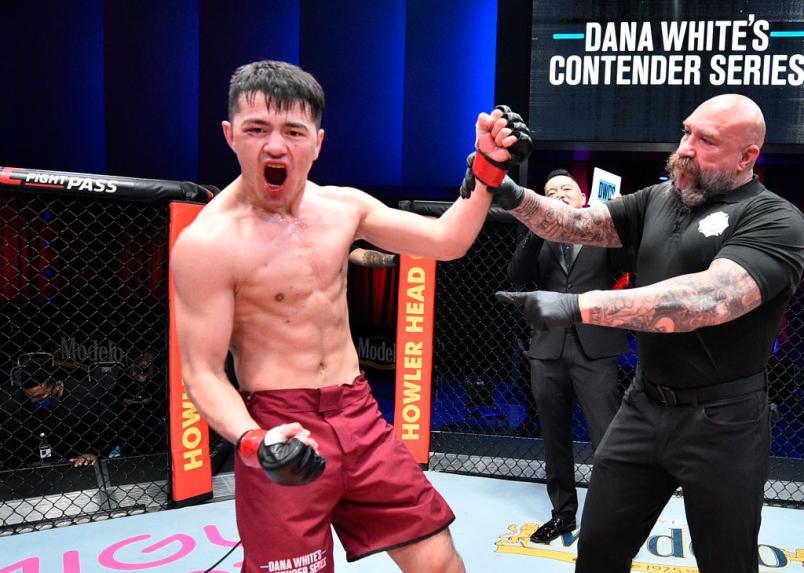 Maheshate reacts after his victory over Achilles Estremadura in a lightweight fight during Dana White's Contender Series season 5, week 10 at UFC APEX on November 02, 2021 in Las Vegas, Nevada. (Photo by Chris Unger/Zuffa LLC)

While Della Maddalena and Fialho have already delivered quality efforts that establish a baseline for where they stand in the welterweight division and provide prospect watchers with better insights for projecting their futures, UFC 275 marks the promotional debut of Maheshate.

The 22-year-old Chinese lightweight earned his place on the UFC roster with a dominant, come-from-behind win over previously undefeated Battlefield Fight League champ Achilles Estremadura last season on DWCS. After dropping the opening frame to the more seasoned Canadian, Maheshate found his footing and rallied, taking the fight to Estremadura over the final two rounds to garner the unanimous decision victory.

He has a unique frame for the lightweight division, standing six-feet tall with only a 71.5-inch reach, meaning he’ll need to add some functional mass and upper body strength in order to work inside and combat foes with significantly greater reaches in the future. But even now, it’s easy to be excited about what the newcomer has already done, and ponder how much he could develop going forward, as he’s earned six straight victories heading into his UFC debut against Steve Garcia at UFC 275.

This is a quality first test for Maheshate — a date with a veteran competitor from a quality camp who had a solid amount of success on the regional circuit and has split a pair of appearances thus far in his UFC career. It’s a similar type of assignment to the one Maheshate successfully completed in Las Vegas last fall, and if he can deliver a comparable effort this weekend, he should garner increased attention heading into his sophomore appearance inside the Octagon.