For the first time in forever — okay, seven weeks, but still — the UFC heads to pay-per-view this weekend with a loaded fight card as UFC 266 touches down at T-Mobile Arena in Las Vegas.

Capped by a pair of exciting championship matchups, this is one of those fight cards where you need to settle in before the opening bout because from the first fight to the last fight on Saturday night, the action is going to be intense, exciting, and non-stop and I really don’t want you to miss it.

Here’s how awesome this lineup is: four of the five main card matchups feature bouts between ranked contenders, and the exception is a clash between Nick Diaz and Robbie Lawler, while each of the televised prelims features one, if not two ranked competitors, and the early prelims are a collection of promising talents and new arrivals, all cobbled together to make an outstanding 13-fight card for your viewing enjoyment.

In order to get you ready for a couple of the contests earlier in the evening, here is a closer look at three of the emerging competitors slated to step into the Octagon in those bouts.

This is the UFC 266 edition of Fighters on the Rise. 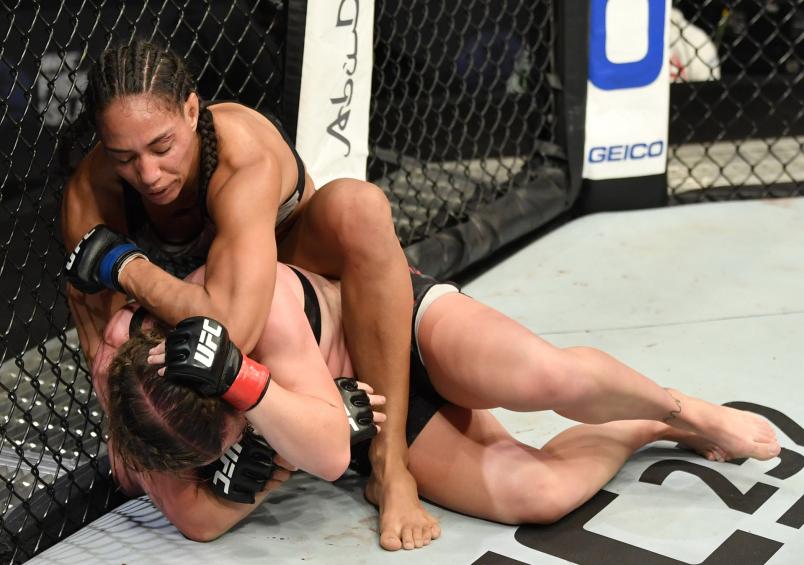 Over her last two appearances, Brazilian Taila Santos has made it clear that she is one to watch in the 125-pound weight class, using her superior grappling skills to collect lopsided decision wins over Molly McCann and Gillian Robertson. Now sporting a 17-1 record overall, the 28-year-old takes a step up the competitive ladder this weekend, squaring off with the most experienced female fighter on the roster, Roxanne Modafferi, in a re-booking of a bout that was initially scheduled to take place earlier this year.

Prior to arriving in the UFC, it was difficult to get a real sense of where Santos could conceivably fit within the flyweight division, as her perfect record prior to competing on Dana White’s Contender Series in the summer of 2018 was built against relatively inexperienced opponents. After earning a contract with a victory over Estefani Almeida, Santos dropped a split decision to Mara Romero Borella in her promotional debut, making it easy to question whether her previously unblemished record was a product of facing overmatched competition or a true reflection of her skills in the cage.

Since that initial setback, Santos has made it clear that she is a legitimate force, dominating McCann last summer on UFC Fight Island before widening the gap between she and Robertson as their December fight progressed, closing out the bout by earning a 10-8 round from two of the three judges scoring the contest.

Now she squares off with the tenured “Happy Warrior,” who returns following a brief stint on the sidelines after suffering a torn meniscus. While she’s alternated losses and wins throughout this second UFC stint, Modafferi has clearly continued to show improvement in victories over Antonina Shevchenko, Maycee Barber, and Andrea Lee, and represents the most experienced and skilled opponent Santos has faced in the UFC thus far.

Should she pass this test, the Brazilian would likely ascend into the Top 10, graduating from prospect to contender in the process, and setting herself up for another marquee assignment next time out. 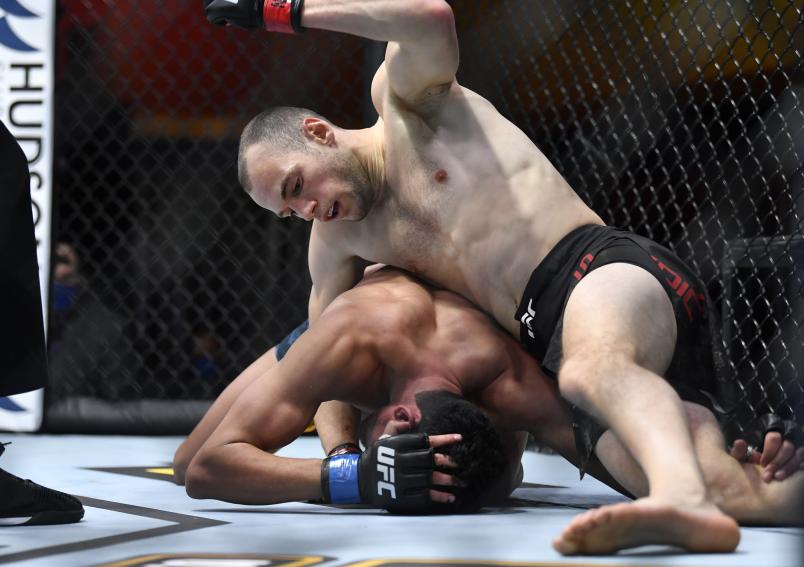 Allow me to set aside the fact that Medic is an undefeated lightweight prospect for a moment — I’ll get back to it shortly, I promise — and focus on another element he brings to the table that makes him someone you need to be paying close attention to going forward: his low-key, nickname-based self-promotion game.

When he knocked out Mikey Gonzalez on DWCS last summer, he looked in the camera and said, “That’s why they call me, ‘The Doctor’ — I bring in the nurse!” Waiting to announce the official decision — TKO (strikes) at 2:12 of Round 1 — Laura Sanko couldn’t help but chuckle.

When this weekend’s fight with Jalin Turner was announced, Medic took to Instagram and posted, “This is a reminder for your doctor’s appointment,” listing the date and location of the contest.

Both are A-plus efforts that just work so well, and what makes them even better is that the 28-year-old has backed everything up with his performance thus far.

Following that win over Gonzalez, the Serbian-born Medic wiped out Aalon Cruz in his promotional debut, felling his fellow Contender Series graduate with a right hook-flying knee-torrent of punches sequence that actually could have been stopped several seconds earlier than it was. It was one of the best debuts of the year and a definite “sit up and take notice” moment if you weren’t already checking for Medic, who pushed his record to 7-0 with seven straight finishes with the victory.

Saturday’s pairing with Turner is unquestionably his toughest assignment to date, as “The Tarantula” is one of the few fighters in the division taller and longer than Medic, and he’s far more experienced inside the Octagon.

After losing his short-notice promotional debut up a division to Vicente Luque, the 26-year-old Turner has gone 3-1, earning three finishes while dropping a decision to veteran Matt Frevola. Last time out, Turner submitted Brok Weaver for his second straight victory, one week after his bout with Thiago Moises was scrapped just a few hours prior to the event with the Brazilian tested positive for COVID-19.

This is a perfect “measuring stick” matchup for Medic at this point in his career — a date with a skilled, more experienced, dangerous opponent that should further clarify where he’s at in his development and how quickly he might be able to climb the ladder in the talent-rich lightweight division.

If he’s able to keep things moving in the right direction and add another finish to his resume, you can expect to see Medic on our “Newcomers of the Year” list towards the end of December and hear plenty of people talking about him as one of the top emerging threats in the 155-pound weight class heading into 2022.

Tags
Fighters On The Rise
UFC 266