With UFC 264 Just Days Away, Make Sure You Know Which Fighters Have Momentum Heading Into The Big Event.
By E. SPENCER KYTE, ON TWITTER @SPENCERKYTE • Jul. 6, 2021

After a thoroughly entertaining June, an action-packed first half of the year, and a one-week respite to get recharged, the second half of the 2021 campaign kicks off this weekend with UFC 264, an absolute blockbuster of a card at T-Mobile Arena in Las Vegas, headlined by the most anticipated clash of the year (so far) — the trilogy bout between Dustin Poirier and Conor McGregor.

The importance of the main event does not need to be restated here — everyone knows the stakes, both in terms of the lightweight title picture and the legacies of these two ultra-talented rivals — and the remainder of the pay-per-view main card features a mix of clashes between contenders, litmus tests for Top 15 hopefuls, and another episode of “The Sugar Show,” all of which combines to make Saturday’s return to action 2021’s biggest event thus far.

What really helps get it there, however, are the exceptional collection of fights slated to take place on the preliminary card — eight bouts across five divisions, including a trio of contests that will clarify where three emerging competitors stand in their quest to scale the rankings and continue making noise in their respective divisions.

This is the UFC 264 edition of Fighters on the Rise. 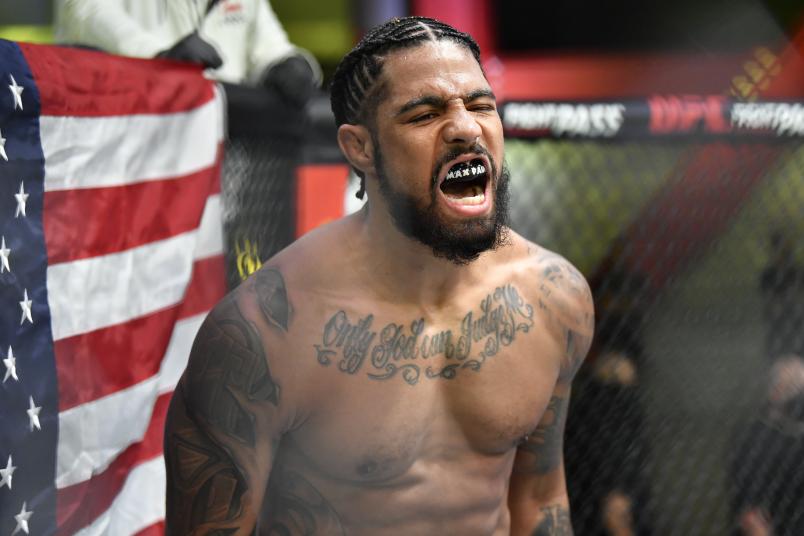 Max Griffin prepares to fight Song Kenan of China in their welterweight fight during the UFC Fight Night event at UFC APEX on March 20, 2021 in Las Vegas, Nevada. (Photo by Chris Unger/Zuffa LLC)

After a 3-6 start to his UFC career where he landed on the wrong side of a couple close decisions, but always delivered exciting fights, the 35-year-old NorCal native has hit his stride over his last two outings, earning consecutive stoppage wins over Ramiz Brahimaj and Song Kenan to head into this weekend’s showdown with Carlos Condit as an intriguing dark horse in the welterweight division.

The talent has always been there for Griffin, a quick, powerful, all-around fighter who has shared the cage with the likes of Colby Covington, Mike Perry, Thiago Alves, and Alex “Cowboy” Oliveira; the thing that was a true belief is that he has what it takes to thrive in the 170-pound ranks.

He flipped that switch towards the end of last year and the results have been impressive, as he halted Brahimaj and followed it up with a first-round knockout win over Song where a swift combination along the fence put the Chinese finisher down before the midway point of the opening frame.

Now he’s lined up opposite Condit, one the most respected, most experienced, and most successful welterweights of the last 15 years, who has also hit the reset button and gotten things moving in the right direction again.

It can take a lot to start making real waves in the welterweight division at times, but a third straight victory — and especially a third-straight finish — would certainly raise some eyebrows and put Griffin in a position to move up the divisional ladder and potentially land an even bigger fight the next time out. 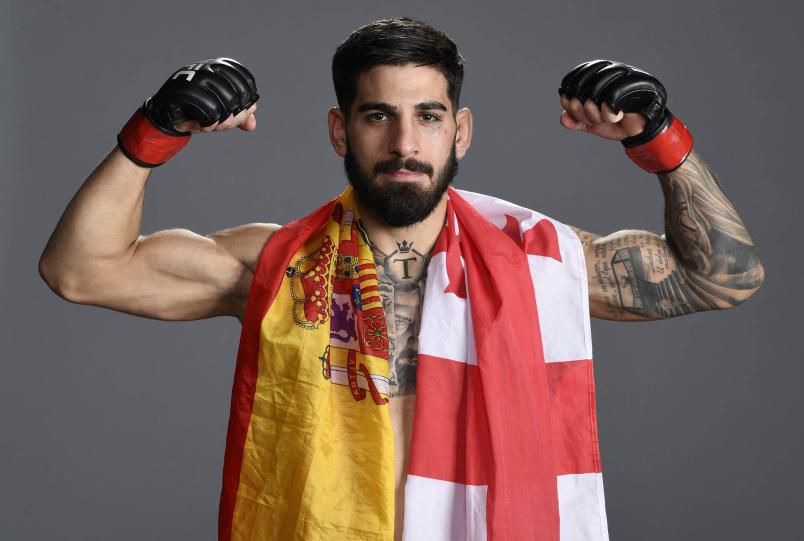 Ilia Topuria of Germany poses for a portrait after his victory during the UFC Fight Night event at UFC APEX on December 05, 2020 in Las Vegas, NV (Photo by Mike Roach/Zuffa LLC)

Featherweight is one of the most talent-rich divisions in the UFC, and landing a spot on the list of top emerging talents in said division is difficult, since space is limited and there is a long queue of people looking to submit their name for consideration.

Last year, in less than two months, Ilia Topuria went from not being on the UFC roster to earning a place on that exclusive list, and this weekend at UFC 264, the 24-year-old looks to make his case for a Top 15 placement as he takes on Ryan Hall.

Unbeaten in the first seven starts of his career, Topuria touched down in the Octagon for the first time last October, serving as a short-notice replacement against streaking Factory X Muay Thai prospect Youssef Zalal, handing “The Moroccan Devil” his first UFC setback and usurping his place amongst the top up-and-comers in the 145-pound ranks. Eight weeks later, he laid out seasoned veteran Damon Jackson in just over half a round, pushing his record to 10-0 in the process and solidifying his standing as one to watch in the ultra-competitive featherweight division.

Now the Climent Club representative is taking aim at a Top 15 ranking as he jumps into the Octagon with Hall, the former TUF winner who is unbeaten in four UFC starts, riding an eight-fight winning streak overall, and aptly nicknamed “The Wizard” because of his magical grappling skills.

In taking an assignment few were in a hurry to accept, Topuria has the chance to put himself in line to face a ranked opponent next time out with a win, and more importantly, to continue solidifying his standing as a person of interest in the featherweight division. Fighters like Arnold Allen, Sodiq Yusuff, and Movsar Evloev have all successfully worked their way along a comparable path, stockpiling wins to land in the rankings and establish themselves amongst the next wave of contenders, and a victory on Saturday night would put Topuria at the vanguard of the next crush of competitors looking to follow in their footsteps. 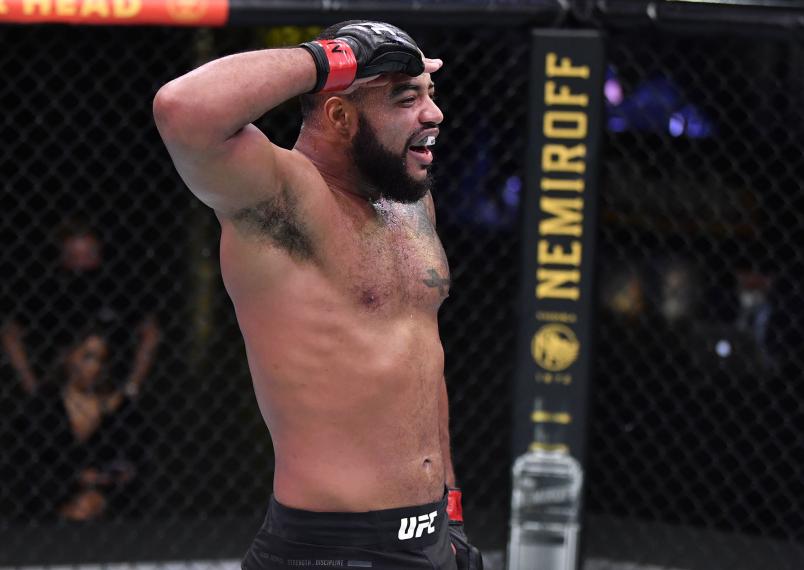 Every time I write about Trevin Giles, I’m reminded that he’s only 28 and that fact makes me shake my head while thinking about the upside the middleweight hopeful carries.

Even before he arrived in the UFC in the summer of 2017, Giles had earned victories over Brendan Allen, Josh Clark, Ike Villanueva, and Ryan Spann. That’s a surging middleweight hopeful, an Ultimate Fighter alum, a battle-tested veteran, and the No. 11 light heavyweight in the UFC right now, and while it hasn’t always been smooth sailing inside the Octagon, Giles heads into this weekend’s matchup with Dricus du Plessis on a three-fight winning streak with designs on continuing his climb up the 185-pound ranks.

Giles pressed pause on his UFC ambitions after earning stoppage wins in each of his first two Octagon appearances in order to attend the police academy, and after a couple setbacks upon returning, Officer Giles of the Houston Police Department has things moving in the right direction again, following up a pair of 2020 triumphs with a hard-fought win over Roman Dolidze, who subbed in for du Plessis on short notice in March, to push his record to 14-2 overall.

This weekend’s matchup with the talented South African is a bit of a fork-in-the-road fight for the upwardly ambitious middleweights, as the victor will take a solid step forward in pursuit of their Top 15 dreams, while the vanquished will be forced to regroup a little before resuming their quest.

Both have high finishing rates and similar levels of experience, so it should be an entertaining scrap from the outset, and if Giles can secure another victory, he could very well emerge as the top up-and-coming prospect in the middleweight division.