Fighters On The Rise | UFC 261 Edition

Find Out Which Fighters Are Trending Upward As We Get Closer To UFC 261: Usman Vs Masvidal 2
By E. Spencer Kyte, on Twitter @SpencerKyte • Apr. 21, 2021

The first event to feature fans in attendance since UFC 248 last March at T-Mobile Arena in Las Vegas, this weekend’s pay-per-view is headlined by a trio of championship fights, as flyweight champion Valentina Shevchenko puts her belt on the line against Brazilian dynamo Jessica Andrade, Zhang Weili defends her strawweight title against former champion Rose Namajunas, and welterweight kingpin Kamaru Usman makes his second title defense of the year as he runs it back with Jorge “Gamebred” Masvidal in the sequel to their clash last summer on Fight Island.

Before those champions and challengers make the walk to the Octagon, a different trio will cross the threshold into the eight-sided proving ground, as three emerging talents look to use this weekend’s event as a chance to showcase their skills and catapult themselves up the ranks in their respective divisions.

This is the UFC 261 Edition of Fighters on the Rise.

A graduate from Season 2 of the Contender Series, Australia’s Jimmy Crute has quickly established himself as one of the top talents to emerge from the program, posting a 4-1 record with four finishes through his first five UFC appearances.

The 25-year-old suffered the first loss of his career in the fall of 2019, getting submitted by Top 15 mainstay Misha Cirkunov, but rebounded in impressive fashion, earning consecutive first-round stoppage wins over Michal Oleksiejczuk and Modestas Bukauskas in February and October of last year, respectively. Equally dangerous standing or on the ground, Crute currently sits at No. 13 in the light heavyweight rankings.

He gets the opportunity to up his standing in the divisional hierarchy this weekend as he kicks off the pay-per-view main card in an all-action pairing with former title challenger Anthony “Lionheart” Smith, who got back into the win column last fall following consecutive losses to top contenders Glover Teixeira and Aleksandar Rakic.

The Contender Series alum stumbled the first time he took a major step up in competition, but a victory on Saturday could catapult him into the thick of the chase in the 205-pound weight class. Both he and Smith are finishers, which means the up and comer could have some chances to land something flush or connect on a submission, and if he ends up pushing his winning streak to three, Crute will graduate from being one of the top prospects in the promotion to a legitimate contender in the light heavyweight division. 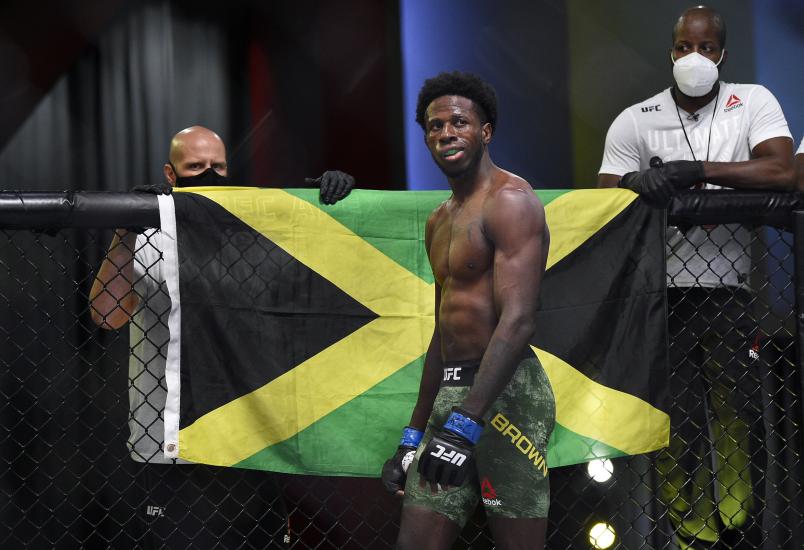 Set to begin his sixth year on the UFC roster, Randy Brown has already established himself as a fixture in the middle of the pack in the competitive welterweight class, posting a 6-4 record that includes wins over Bryan Barberena and Warlley Alves, and hard-fought losses to Top 15 talents Belal Muhammad and Vicente Luque.

Firmly established as a permanent fixture in the division, Brown is looking to make 2021 the year he takes a step forward, with designs on becoming a Top 15 fighter himself. His first opportunity of the year comes on Saturday as he squares off with one of the most experienced fighters in the division, Alex “Cowboy” Oliveira.

The Brazilian veteran has fought at least twice in every year that he’s been on the UFC roster, logging a total of 19 appearances inside the Octagon. Aggressive and durable, the 33-year-old has always been a quality measuring stick used to get a read of where his opponents stand in the division; beat him, and you’re one step closer to the rankings, but falter, and you’re forced to take a step back and reset.

Despite landing on the wrong side of the result in his lone appearance of 2020, Brown has shown considerable growth since his early days on the roster, growing into his six-foot-three frame while developing keen finishing instincts, earning four of his last five victories inside the distance. Working with the Bellmore Kickboxing crew on Long Island, “Rudeboy” has all the tools to make a run in the 170-pound weight class, and if he gets through Oliveira this weekend, he’ll put himself in prime position to earn another step up in competition next time out. 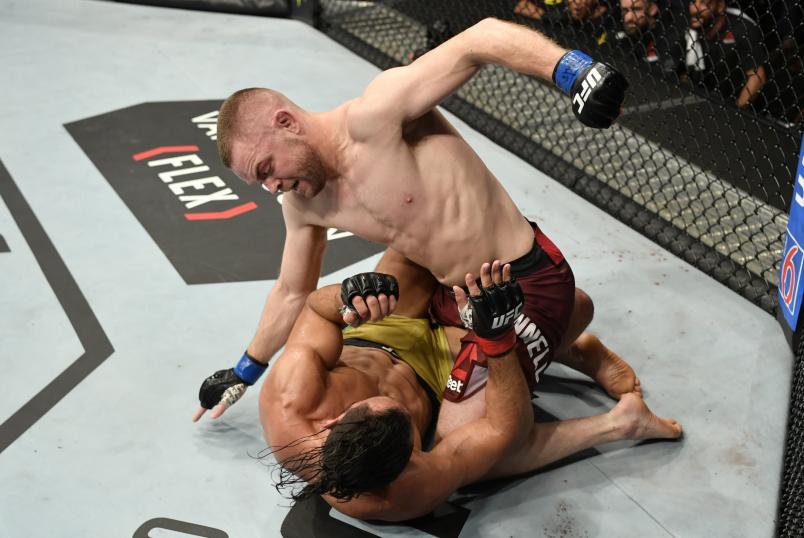 Tristan Connelly of Canada punches Michel Pereira of Brazil in their middleweight bout during the UFC Fight Night event at Rogers Arena on September 14, 2019 in Vancouver, Canada. (Photo by Jeff Bottari/Zuffa LLC)

Tristan Connelly’s UFC debut couldn’t have gone any better, as the 35-year-old veteran parlayed a short-notice opportunity at home in Vancouver into a unanimous decision victory and a cool $100,000 in bonus money thanks to his opponent, Michel Pereira, missing weight ahead of their Fight of the Night-winning clash.

But “Boondock” has been out of action since, initially sidelined when the coronavirus forced the cancellation of several fight cards and forced to remain there after a car accident left him in need of neck surgery.

Finally healthy and ready to return, the Checkmat Vancouver representative is slated to drop two divisions, venturing to featherweight for the first time in several years this weekend to welcome Patrick Sabatini into the Octagon for the first time.

RELATED: Preview Each Fight On UFC 261

Connelly was a .500 fighter through the first 10 bouts of his career, but since then, the well-rounded finisher has rattled off nine victories in 10 starts, including six straight heading into Saturday’s meeting with Sabatini. Those early struggles allowed him to address the holes in his game and how to play to his strengths inside the cage, and the results since speak for themselves.

A two-time titleholder under the CFFC banner, Sabatini brings a 13-3 record into his promotional debut, which was initially slated to take place towards the end of February before his opponent, Rafael Alves, missed the lightweight limit for their featherweight fight.

If Connelly can shake off the rust and extend his winning streak, he’ll establish himself as an intriguing dark horse in the deep and talented 145-pound weight class and position himself for a bigger opportunity in the second half of the year.