Fighters on the rise at UFC 211 this weekend

Fight week for the most anticipated event of the year (so far) is upon us and the UFC 211 main card is as powerful and packed with compelling fights as any event in recent memory, boasting a pair of intriguing championship matchups, a likely welterweight title eliminator and two potential “changing of the guard” fights in divisions where the next generation is getting closer to being the now generation with each appearance.

But the awesomeness isn’t exclusive to the Pay-Per-View portion of the show, as the preliminary card features a number of quality pairings and a handful of emerging fighters with the potential to become impact players down the line.

Here’s a look at those athletes.

Branch’s first run in the UFC was a four-fight, nine-month run that produced a .500 record and a clear indication of what the Renzo Gracie black belt needed to work on if he wanted to succeed at the highest levels in the sport. Six years and a couple months after his last appearance in the Octagon, the 35-year-old middleweight is poised to step into the UFC cage again and his return should have fight fans excited.

In the time since his initial run came to a close, Branch has gone 12-1, winning both the middleweight and light heavyweight titles under the World Series of Fighting banner during a 10-fight run of success that remains intact heading into Saturday’s meeting with Krysztof Jotko. He’s compared himself to boxing legend Bernard Hopkins and wants to match the success “B-Hop” had in those post-35 years when most assume combat sports athletes are in decline.

Get ready for UFC 211: Fight card | Reasons to watch | Camp updates: American Top Team, Strong Style | Andrade has become best version of self as strawweight | Watch: Free fight: Dos Santos vs Miocic 1 | Inside the numbers for the main event | UFC 211 extended preview | Do not miss out! Order the PPV now

Jotko is a perfect measuring stick at this point, as the 27-year-old has rattled off five straight wins to establish himself as one of the top up-and-coming threats in the 185-pound weight division. Dispatching the surging Polish upstart would affirm Branch as a Top 10 talent and instantly put him in the thick of things in the middleweight ranks. 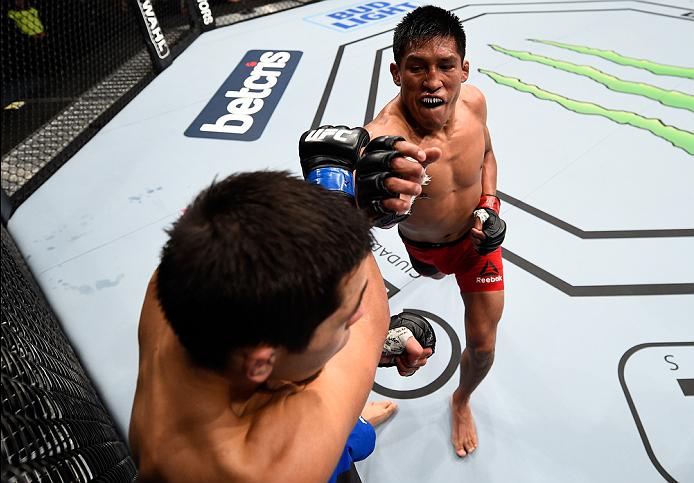 After winning the featherweight competition on Season 2 of The Ultimate Fighter: Latin America, Barzola came out on the wrong side of a split decision verdict opposite Kyle Bochniak in Vancouver, a result that those in attendance at Rogers Arena felt was a mistake.

How a fighter rebounds from a situation like that says a lot about them and rather than allowing his first UFC setback to break his spirits, the Peruvian sparkplug stepped back into the cage less than three months later and put it on Chris Avila, getting back into the win column with a one-sided unanimous decision victory in Mexico City.

Set to face fellow TUF: Latin America alum Gabriel Benitez this weekend in Dallas, the 28-year-old is hoping to kick off his first extended winning streak on the big stage and further show that his loss to Bochniak was an aberration. He’s shown steady growth between each of his first three Octagon appearances and if that pattern holds up in this one, Barzola could very well accomplish that feat and take another step forward in the deepening featherweight division.

If you’re a fight fan looking for fresh blood in the light heavyweight division, you’re going to want to familiarize yourself with how to pronounce this man’s name because Gadzhimurad Antigulov is going to be a player in the 205-pound ranks in the not too distant future.

In his Octagon debut last November, Antigulov needed just 67 seconds to submit Marcos Rogerio de Lima, taking him to the canvas in the opening 20 seconds before doing an excellent job of getting back to guard after securing what turned out to be the fight-ending guillotine choke. The victory pushed his winning streak to a baker’s dozen and set him up with this weekend’s opening matchup with Joachim Christensen.

With the light heavyweight ranks always in need of fresh names, a similarly strong effort against Christensen on Saturday could land Antigulov on the fast track to bigger fights in the second half of 2017.