Fighters On The Rise: November 7 Edition

The UFC is officially in the home stretch for the 2020 campaign, as October has given way to November, leaving two months remaining on the calendar before we finally say goodbye to 2020.

As difficult as 2020 has been, the action inside the Octagon has been consistently excellent and this weekend’s latest fight card at the UFC Apex in Las Vegas is no different as a host of elite athletes look to close out the year on a high note by registering a win this weekend.

Headlined by a matchup between veteran light heavyweight contenders Glover Teixeira and Thiago Santos that could very well determine who will get the first crack at new champion Jan Blachowicz once the new year rolls around, the lineup ahead of the main event is chock full of emerging talents on the cusp of contention in their respective divisions.

Here’s a closer look at three competitors to pay close attention to this weekend and going forward.

This is the November 7 edition of On the Rise.

Everyone’s favorite Albertan looks to make it three straight victories since the restart this weekend as he steps into the Octagon with one of the most experienced members of the heavyweight ranks, former champion Andrei Arlovski.

Boser deployed a “have fists, will travel” approach to his career on the regional circuit, traveling around the globe taking on established veterans and comparative unknowns alike as he logged time in the cage and gained invaluable experience before being called up to the UFC in the summer of 2019. Initially slated to debut in his home province at UFC 240 in July, Boser’s maiden voyage into the Octagon instead came three months later in Boston, where he outlasted Daniel Spitz to earn his first UFC victory.

After dropping a decision to rising star Ciryl Gane at the end of the year in Busan, South Korea, Boser enjoyed a breakthrough month earlier this summer when he posted back-to-back highlight reel finishes against Philipe Lins and Raphael Pessoa four weeks apart. He cemented his standing as a media darling and emerging cult figure by showing everyone how he can open a can of Monster with one of his chicklets.

Having already dispatched a trio of fellow prospects over his first four appearances, Saturday’s matchup with Arlovski is a chance for Boser to prove he has long-term upside in the heavyweight ranks and potentially land a spot in the Top 15 to close out the year.

Allen doesn’t turn 25 until three days after Christmas, but the Louisiana native has already amassed a 15-3 record overall and three straight victories inside the Octagon.

The former LFA middleweight champ and Contender Series graduate earned a second-round submission win over Kevin Holland in his promotional debut, then started his year with a first-round stoppage victory over Tom Breese at the end of February. He followed that up by earning a unanimous decision win over Kyle Daukaus in June, and now he goes searching for a third 2020 triumph when he takes on Ian Heinisch in a matchup that was originally slated to take place earlier this summer.

Though he was frustrated by his performance against Daukaus, who subbed in for Heinisch on short notice after “The Hurricane” suffered a knee injury prior to the contest, there are a lot of reasons to be excited about Allen’s prospects in the middleweight division.

He fought an outstanding strength of schedule on the way to the UFC, competing primarily under the LFA banner and winning the promotion’s middleweight title, while each of his three career setbacks all came against fighters that arrived in the Octagon ahead of him — Trevin Giles, Eryk Anders, and Anthony Hernandez.

Finishing Holland and Breese is an impressive one-two punch to start his UFC run, as their recent performances illustrate, and his displeasure with his efforts in the fight against Daukaus where he swept the scorecards highlights the lofty standards he holds himself to each and every time he steps into the cage.

A long-time member of the Roufusport camp, Allen shifted his training to Sanford MMA in South Florida ahead of his bout with Heinisch and it will be interesting to see what working with a new collection of coaches and training partners brings out of the ultra-talented middleweight upstart.

Having won seven straight heading into Saturday’s long-awaited clash with Heinisch, Allen has the chance to vault himself into the middleweight rankings to close out the year and put himself in a position to make a run towards the top of the division in 2021 if he can secure another impressive victory this weekend. 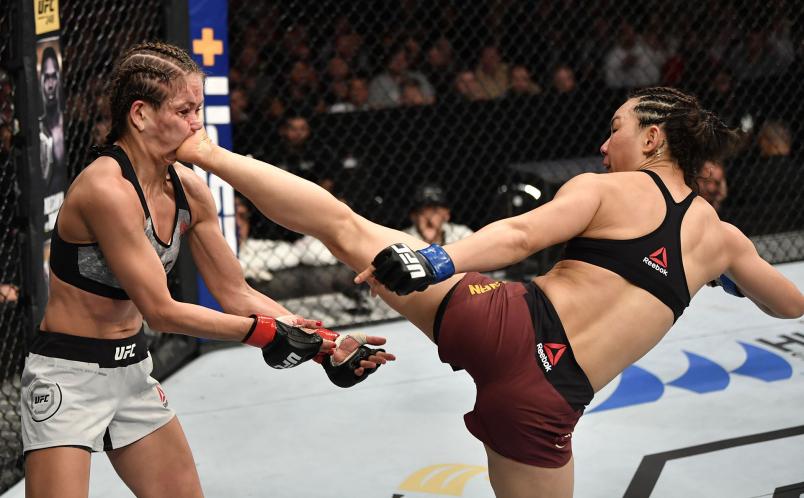 If you ever wondered why the strawweight division is regarded as the deepest collection of talent on the women’s side of the UFC roster, all you need to do is consider the case of Yan Xiaonan.

The 31-year-old is a perfect 5-0 in the UFC and riding an 11-fight unbeaten streak overall, yet she enters this weekend’s matchup with Claudia Gadelha stationed at No. 8 in the rankings, four spots behind her opponent and one spot behind Brazilian Marina Rodriguez, who is 2-1-2 over her first five Octagon appearances.

After earning unanimous decision triumphs over Kailin Curran, Viviane Pereira, and Syuri Kondo over her first three fights, Yan has responded well to a step up in competition over her last two outings. First, she outworked Angela Hill at UFC 238 in Chicago before dominating former title challenger and perennial contender Karolina Kowalkiewicz in her first appearance of the year in Auckland.

With the win, the continued improvement and ascent of Yan cannot be overlooked. She is a high-output, pressure fighter with an excellent gas tank and a willingness to engage, which allows her to outwork some of her more patient opponents who tend to produce a lower volume of strikes each round.

This weekend’s bout with Gadelha will be the real measuring stick of where the China native fits within the divisional hierarchy, as despite engaging in a number of close contests over the last several years, the former title challenger from Brazil remains a fixture in the Top 5 and sports a 5-2 record since her championship fight opposite Joanna Jedrzejczyk during International Fight Week 2016.

Though she’s one of the least talked about members of the Top 10, a sixth straight win and an impressive performance against Gadelha Saturday in Las Vegas will force everyone to recognize Yan as a rising contender and some to keep close tabs on heading into 2021.