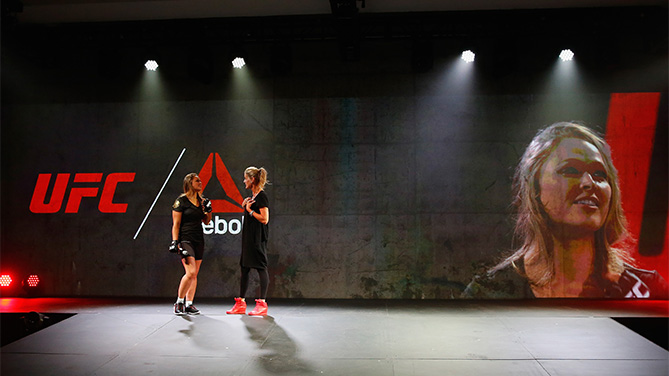 Tuesday’s premiere of the official UFC Fight Kit Tuesday was an aesthetic success, with the streamlined look and the availability of individualization for each fighter adding a level of professionalism to the sport as it continues its international expansion.

But what’s the reaction from fighters who have to compete in the gear? By all accounts, the reaction looks like a collective thumbs-up. UFC middleweight champion Chris Weidman, for one, is eager to try it out in the LAW MMA Gym in Long Island, and against Luke Rockhold later this year.

“It's not restrictive, the material is very comfortable, but it seems like it will hold up to a hard workout,” Weidman said as he modeled the new gear at the grand unveil at the Skylight Modern in New York City. “It's pretty cool stuff and I'm excited to start training in it.” 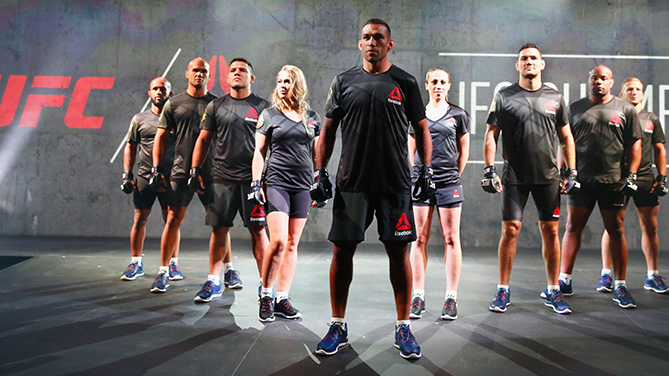 Corinna Werkle, General Manager of Reebok’s Training Business Unit, Reebok Brand, said that the key to creating the line of fighter gear (which is also available to the public) rested on four points: flexibility, strength, customization and fit.

And while it’s assumed when a fighter steps into the Octagon all that matters is what he or she does with their fists and feet, that’s not always the case.

“My first UFC fight, I had a problem with my cup,” former UFC heavyweight champion Cain Velasquez said with a laugh. “The only thing I was thinking of was 'I can't wait to go out there and finish the fight just so I can get changed.

“So (having your gear right) is very important. You don't want anything else on your mind. You just want to go out there, have your mind free, and just focus on what you have to do out there. You don't want to focus on your shorts or your gear. If something's not right, that's going to be in the back of your mind, and that's something you can't think about.” 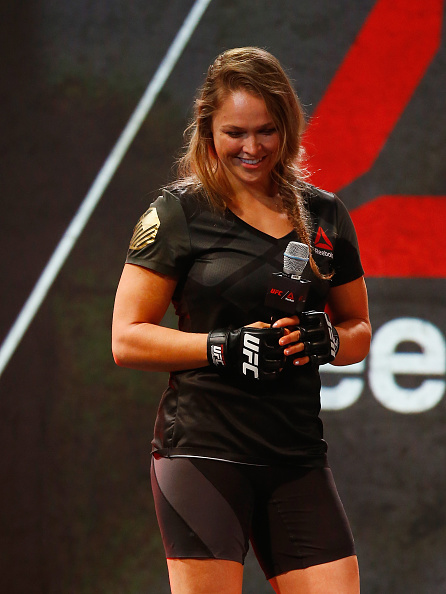 Ronda Rousey speaks to Reebok design expert Corinna Werkle during the Reebok Fight Kit Launch at Skylight Modern. (Photo by Al Bello/Zuffa LLC)" align="left" />Even the most dominant fighter in the UFC, women’s bantamweight champion Ronda Rousey, has had her issues with gear that often wasn’t made specifically for women. With the Reebok alliance, that no longer is the case, and “Rowdy” Ronda, who broke camp briefly for her August 1 bout against Bethe Correia to be in NYC, couldn’t be happier.

“The fewest amount of distractions you have possible while you're fighting, the better,” she said. “I've had two instances where I actually had to change what I was doing in the fight because of what was going on with my clothes, and I was actually worse off for it.

“The first time I beat Miesha (Tate) for the (Strikeforce) title, I was in a position where I could have just jumped up and got out of the position I was in, but if I did it the way I wanted to, I would have flashed everybody. So I had to think of an entirely different way, a much more dangerous way to get out because I wanted to avoid that risk.”

“It was the same thing with Liz Carmouche. I was in the middle of getting out of a face crank and my neck could have gotten broken and I felt my jaw dislocate and all I was thinking was that 'I'm falling out of my bra.'” Rousey recalled, laughing. “And by the time I got her off me, the first thing I did was fix my bra and she kicked me straight in the chest. I would have had one less kick in the chest if I had a good bra on.” 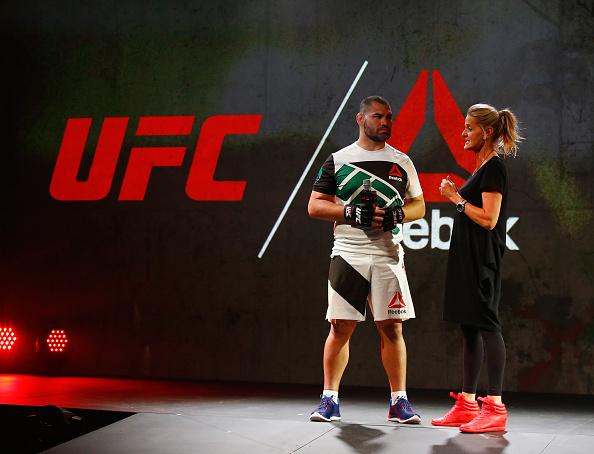 The ability to focus on the fight and nothing else is perhaps the most important part of the UFC / Reebok deal. That doesn’t just mean inside the Octagon either, as Weidman points out.

“It legitimizes the sport in a big way,” he said. “I think it even helps us with outside sponsors. It gives us a nicer look to where some bigger sponsors in different fields might be more interested in working with us.”

Ultimately, that champion’s insignia on the gear of those that hold the UFC belt is something that will always be with them. Rousey, an Olympic Bronze medalist in judo, knows that feeling, having been through team branding once before as a member of Team USA.

“I remember how excited I would be,” she said. “For the Olympics they would have this whole store-like area and you'd go from station-to-station with a shopping cart and they would fill your shopping cart and I wore it for years afterward. Anytime I lost one of my official Olympic gear things, I would get so sad about it.

It’s also something Velasquez wants to get back. When asked if he almost took the champion’s black jersey out of habit, he laughed. But the fire in his eyes to get back the crown he lost to Fabricio Werdum earlier this month is evident.

As for being around Werdum the last couple days, Velasquez said, “The stuff we do with the UFC, we're always around our opponents or past opponents, and we're cordial, so it doesn't matter to me. I'm thinking about it, yeah, it's still fresh, but I will have my chance. I know that.”