The latest on Dana White's The Fighters, which premieres on Discovery Channel Thursday... 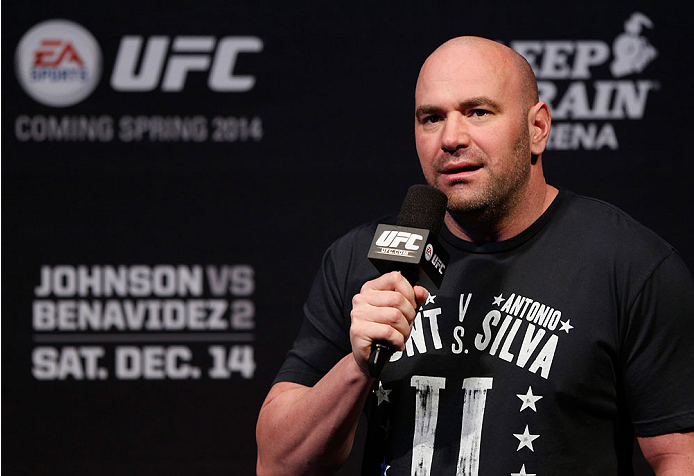 One of South Boston’s most respected boxing trainers, Peter Welch remembers his first encounter with Dana White back in the days before White went on to become president of the Ultimate Fighting Championship. Then, White was like a lot of young men in Southie (and around the country for that matter) who were eager to put on the gloves and see what they were made of.

Welch, a former Golden Gloves champion and an ex-pro, ran into a lot of similarly-minded folks in his job running a gym. For him, it was more of a distraction than anything, simply because his focus was on training the kids who came in off the streets to stay out of trouble.

“I didn’t have time for him when we were training the kids, so I figure I’m going to chase him out of the gym,” recalled Welch. “He comes in for sparring, I figured I’d slap him around a little bit and the next thing you know he’d be gone. The kid wouldn’t stop coming back to the gym. So I was stuck with him.”

He laughs about it now, but what started in that gym developed into a working partnership and a friendship that lasts to this day. And when White saw what Welch was doing to try and revive the sweet science in New England, he and Craig Piligian, who have produced more than 18 seasons of The Ultimate Fighter, created The Fighters, a new boxing reality show which premieres Thursday night on Discovery Channel. See sneak peek

“The best way to explain it is, I love the fight business,” said White. “I love what I do now and I still love the sport of boxing, contrary to popular belief. I wouldn’t even be bothering with this show if I didn’t. And this is my attempt to see what I can contribute.”

Far from your typical reality show, or any previous attempt at a boxing reality series for that matter, The Fighters focuses on the amateur scene, but there are no contracts for the winners and no tournaments. As the top fighters from various gyms compete, the focus is on the lives of those involved and their journey to get to this point. It’s real-life drama, and a reminder that the characters in boxing are more intriguing than anything Hollywood could make up.

And for White, there was no other place to launch what he hopes will be a long-running series than in Boston.

“Boston is still one of those places where you can have a fight down in an armory and the place is going to be packed,” he said. “People care about the fights and they care about the fighters, and that city loves its boxing. So I thought it was a unique look, not only into the world of boxing, but the world of South Boston and New England. You’ll notice how many movies and TV shows are based in Boston, because it’s such a unique city in many, many ways.”

The show also shows the unique world of boxing that doesn’t show up in the lead-up to the megafights in Las Vegas and New York. This is true grassroots stuff, and anyone who knows the sport knows that to get it back to the point where it used to be in its Golden Age, it starts on the ground floor of the sport, and The Fighters takes you right up to that ground floor.

“I’m hoping we can make an impact,” said Welch. “We don’t have anything to prove to anybody, we don’t have any major money at stake. All we have is our reputation and what we can do to help the sport at our level. We’re trying to keep the sport real.”

As for White, the biggest question is, how is he finding the time for this?

“Every year we take things to the next level, and every year everybody throughout this whole company looks around and goes ‘how are we going to do that?’” he said. “That’s what we do every year. But guess what? We do it. That’s part of the fun of it. And if I can launch this show on Discovery and this thing becomes successful and they want a season two, wait until you see season two.”