After wrapping up Q1 by crowning a new heavyweight champion at UFC 260, the mixed martial arts leader took its first break in eight weeks, but this weekend, the action returns to the Octagon and returns to ABC with a 15-fight card that kicks off another stretch of seven consecutive Saturdays featuring live UFC events.

Headlined by a battle between Marvin Vettori and Kevin Holland, this is one of those cards that is packed with compelling and competitive fights featuring a mix of established veterans, emerging prospects, and everything in between.

There are a host of promising up and comers poised to make the walk to the Octagon on Saturday at the UFC APEX.

This is the April 10 edition of Fighters on the Rise.

Sasha Palatnikov made UFC history in his UFC debut, becoming the first Hong Kong native to compete in the Octagon. He also made a big splash byknocking out the previously undefeated Louis Cosce in the third-round of their UFC 255 bout.

Palatnikov (6-2) displayed his outstanding technique and his ability do power through adversity as he rallied from a tough first round to outstrike Cosce in the second and close him out in the third.

Up next for Palatnikov is Impa Kasanganay, who is moving down to welterweight for the bout. It's another big test but it's the perfect way for the Syndicate MMA product to show that he is someone to keep an eye on in the welterweight division. 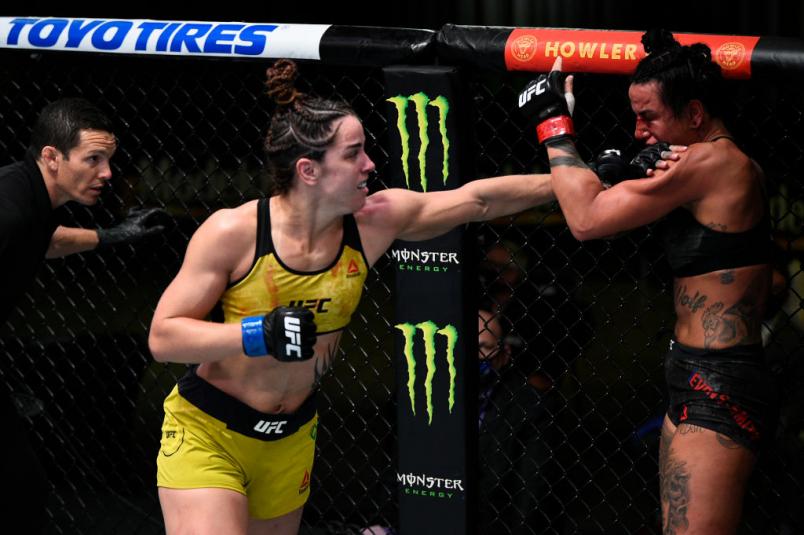 Brazil’s Dumont made her Octagon debut last February in Norfolk, Virginia, stepping in against Megan Anderson in a featherweight contest that went sideways in a hurry. Just over three minutes into her first round in the UFC, Dumont got dropped, giving Anderson the victory that catapulted her into her recent featherweight championship clash with Amanda Nunes.

Nine months later (less a day), “The Immortal” made her sophomore appearance, dropping to the bantamweight ranks and returning to the win column by out-working veteran Ashlee Evans-Smith over the course of 15 minutes. It was a much more representative showing of what Dumont brings to the cage, and sent her into this year with positive momentum.

This weekend, she makes her first start of 2021 in a clash with the promising newcomer Erin Blanchfield, who steps in for the injured Bea Malecki.

A 21-year-old grappler who has already logged six wins in seven starts, Blanchfield arrives on a three-fight winning streak, with her lone setback coming against emerging UFC prospect Tracy Cortez, making her a stern test for Dumont as she looks to build on her performance against Evans-Smith back in in November.

While both women are still in the developmental stages of their respective careers, this is a perfect measuring stick opportunity for Dumont to gauge where she stands in the 135-pound ranks. Blanchfield is a highly regarded prospect with quality experience to this stage of her career, and if Dumont can keep things moving forward by turning her back, it could earn the 30-year-old a step up in competition next time out. 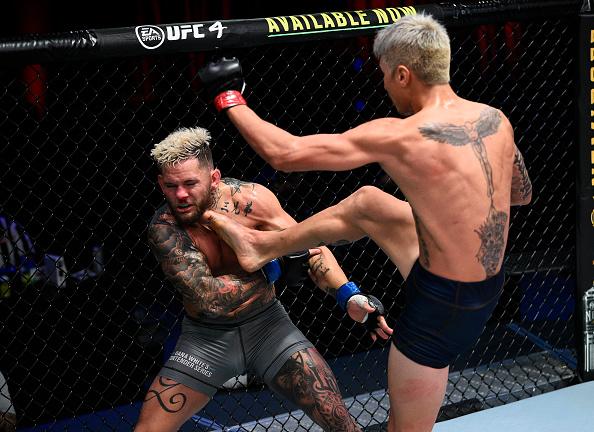 Saldana orchestrated one of the best performances of the season last year on the Contender Series, registering a third-round stoppage win over Team Alpha Male vet Vince Murdock where he crashed home not one, but two front kicks to the face to begin the finishing sequence.

Tall for the featherweight division and already adept at using all of his 73-inch reach, the 30-year-old newcomer is one of the myriad outstanding prospects to come up through the MMA Lab before following coach Eddie Cha to Fight Ready MMA, where he trains alongside fellow Contender Series grad Jonathan Pierce and “Triple C,” Henry Cejudo. Saturday night, Saldana makes his first walk to the Octagon to square off with another Contender Series alum, Jordan Griffin, in a preliminary card pairing.

The 31-year-old Griffin is just 1-3 in his first four UFC starts, but “NativePsycho” has faced tough competition, dropping matchups against Dan Ige, Chas Skelly, and Youssef Zalal. A long-time member of the Roufusport camp, the battle-tested veteran is a tough assignment for anyone in the 145-pound weight class and a difficult entrance exam for the debuting Saldana on Saturday night.

But the upside of a challenging pairing like this for Saldana is that a strong showing against Griffin will speak volumes about his potential and possibly expedite his climb up the divisional ranks. He’s won each of his last four outings, collecting stoppages in each, and if he can push one or both of those streaks to five on Saturday, it will get Saldana’s UFC career off to a quick start and have him headed in the right direction heading into his next appearance.