Fighters On The Rise | UFC Fight Night: Lewis vs Daukaus

Once more unto the breach, dear friends… For the final time in 2021, a host of talented competitors will make the walk to the Octagon this weekend inside the UFC APEX, aiming to close out the year with their hands raised in victory.

Don't Miss Any Of UFC Fight Night: Lewis vs Daukaus

Headlined by a heavyweight banger between Derrick Lewis and Chris Daukaus with a host of compelling pairings positioned before the main event, Saturday’s fight card, is sure to close out 2021 with a bang.

Coupled with everything that has already taken place this month, will give fans plenty to ponder and discuss as they gather with their loved ones, enjoy the holidays, and look ahead to the start of the 2022 campaign.

This is a fight card that is going to clarify things in a couple divisions, as a trio of emerging talents face their toughest assignments to date, with designs on a victory catapulting them into the rankings heading into next year.

Here’s a closer look at those competitors — this is the December 18 edition of Fighters on the Rise.

Having already used a pair of first-round stoppage wins to elevate herself into the Top 15 in the strawweight division, Brazil’s Lemos goes in search of a third victory this year and to extend her winning streak to five overall on Saturday when she takes on Angela Hill on Saturday’s main card.

Lemos made her promotional debut at bantamweight with a loss to Leslie Smith on a fight card in Glasgow, Scotland in the summer of 2016. A two-year ban from USADA followed, and when she returned, the 34-year-old dropped to strawweight and posted a first-round submission win over Miranda Granger on the final card of 2019.

Defeating young veteran Mizuki by unanimous decision didn’t make many waves, but people started to take notice of Lemos when she stopped Livinha Souza at UFC 259 in March and really began paying attention when she turned up with a new haircut and the same ferocious power for her fight with Montserrat Conejo in July.

Lemos needed just 35 seconds to dispatch the Mexican grappler, making her pay for recklessly charging forward by hitting her with a cracking right hand while backing up, pivoting on the spot to catch Conejo three more times as he tumbled to the canvas. 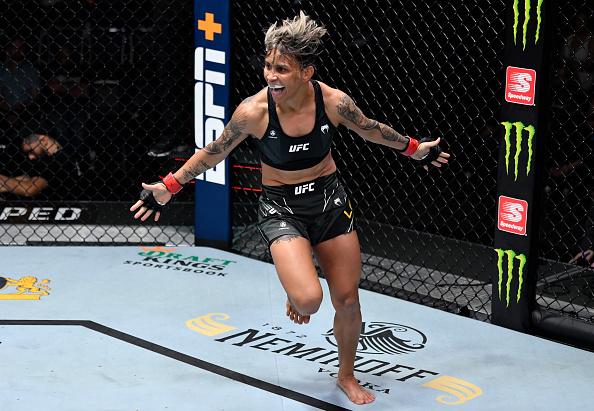 Amanda Lemos of Brazil reacts after her victory over Montserrat Conejo of Mexico in their strawweight bout during the UFC Fight Night event at UFC APEX on July 17, 2021 in Las Vegas, Nevada. (Photo by Jeff Bottari/Zuffa LLC)

Originally scheduled to face Nina Nunes, Lemos now faces divisional stalwart Angela Hill, who looks to rebound from a unanimous decision loss to Tecia Torres at UFC 265 in August. Despite limited results over her last four outings, Hill is the most experienced, most battle-tested fighter Lemos has faced to date, and a fellow striker, which means this matchup should provide further clarity about where the Brazilian stands in the division and just how dangerous she is inside the Octagon.

If Lemos can wrap up the year with a third straight victory, she should climb into the Top 10 and be in the mix for another step up in competition next time out. And if she runs through Hill the way she did Souza and Conejo, a place in the title conversation doesn’t feel out of the question.

Gamrot arrived in the UFC with an undefeated record and a reputation as one of the top lightweights competing outside of the Octagon. He promptly dropped a close decision to Guram Kutateladze in his debut.

The now 31-year-old Polish competitor returned in April and knocked out Scott Holtzman with a clean one-two right down the pipe roughly 90 seconds into the second round. As a follow-up, Gamrot welcomed Jeremy Stephens back to the lightweight division in July, quickly taking the veteran powerhouse to the canvas and forcing him to tap to a gnarly kimura in just over a minute. 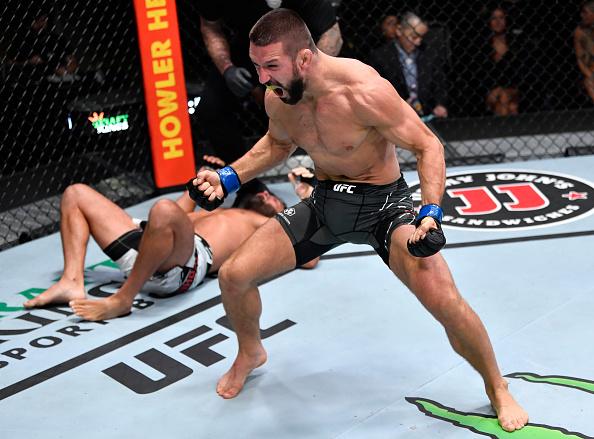 Mateusz Gamrot of Poland reacts after his submission victory over Jeremy Stephens in their middleweight bout during the UFC Fight Night event at UFC APEX on July 17, 2021 in Las Vegas, Nevada. (Photo by Jeff Bottari/Zuffa LLC)

After entering the year on a six-fight winning streak, Ferreira dropped a split decision to Beneil Dariush in February, and then faded hard and was finished by Gregor Gillespie three months later in a fight where he missed weight by a considerable amount, as well. Still positioned in the Top 15, Ferreira is a decorated grappler and has only ever lost to ranked competition, so this is an outstanding litmus test for Gamrot as he looks to advance further up the lightweight ladder to close out the year.

Gamrot was a two-division champion for KSW in his native Poland and fought quality competition there, and has bounced back from his narrow loss to Kutateladze with a pair of impressive finishes already this year. If he can push his winning streak to three with another dominant effort, people should start to consider him a dark horse contender in the ultra-competitive 155-pound weight class.

The mulleted wrestler from the Pacific Northwest returns to Las Vegas in search of his third victory of the year and fourth straight win overall on Saturday, squaring off with bantamweight stalwart Raphael Assunção in another “measuring stick” matchup on this weekend’s main card.

Simón got a win on the first season of Dana White’s Contender Series, but didn’t come away with a contract, but after winning and successfully defending the LFA bantamweight strap, he was called to the Octagon in April 2018, earning a technical submission win over Merab Dvalishvili in his promotional debut. Wins over Montel Jackson and Rani Yahya followed, establishing Simón as someone to watch in the 135-pound weight class, but a flash knockout loss to Urijah Faber and a unanimous decision setback against Rob Font halted his momentum.

A win over Ray Borg got him moving in the right direction again, while victories over Gaetano Pirrello and Brian Kelleher four weeks apart at the start of the year delivered him to the brink of breaking into the rankings and another chance to beat a veteran and earn a number next to his name. 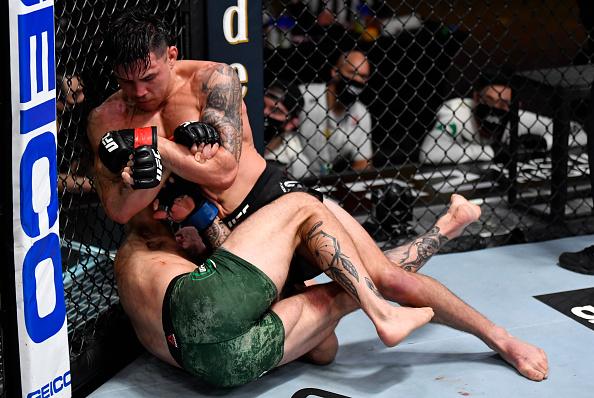 Ricky Simon attempts an arm lock against Brian Kelleher in their featherweight fight during the UFC 258 event at UFC APEX on February 13, 2021 in Las Vegas, Nevada. (Photo by Jeff Bottari/Zuffa LLC)

Assunção is a tenured member of the Top 15, standing as a legitimate contender and veteran litmus test in the 135-pound weight class for the last decade. After an incredible 11-1 run where his only loss came in a rematch against two-time champ TJ Dillashaw, Assunção arrives in Las Vegas on a three-fight skid and fighting for the first time since being knocked out by Cody Garbrandt last summer.

Simón’s return to the win column has coincided with a return to playing to his strengths, as the standout grappler has amassed 20 takedowns over his last three fights, piling up five minutes, seven minutes, and eight minutes of control time in those three outings.

Assunção is no slouch on the ground and is the toughest test the streaking 29-year-old has faced in a couple years, but if Simón can continue dominating on the canvas and secure a fourth consecutive victory, he could find himself in the Top 15 as 2021 gives way to 2022.