See Which UFC Fighters We Have Our Eyes On Heading Into UFC Fight Night: Gane vs Volkov
By E. Spencer Kyte, on Twitter @SpencerKyte • Jun. 22, 2021

Saturday’s fight card at the UFC APEX is a terrific way to wrap up the month before everyone resets and gets ready for Poirier-McGregor 3 in the main event of UFC 264 on July 10 at T-Mobile Arena.

Headlined by a crucial heavyweight showdown between Top 5 contenders Ciryl Gane and Alexander Volkov, the event features a solid collection of bouts carrying divisional ramifications just outside the title picture in some of the most competitive weight classes in the UFC.

Included in there are quality matchups for a trio of athletes looking to build off strong recent results and take another step forward in their respective divisions; competitors looking to use this weekend’s fight card as a way to position themselves for even bigger and even better in the second half of the year.

Here’s a closer look at those up-and-coming talents.

This is the June 26 edition of Fighters on the Rise.

As Raoni Barcelos readies to step into the Octagon this weekend against Timur Valiev, the Brazilian is riding a nine-fight winning streak that includes five consecutive victories inside the Octagon and sporting a 16-1 record overall.

That lone loss came more than seven years ago, and since then, the 34-year-old has won the RFA featherweight title, successfully defending it against future UFC competitors Bobby Moffett and Dan Moret, signed with the UFC, dropped to bantamweight, and steadily worked his way up the rankings, posting wins over dangerous opponents like Kurt Holobaugh, Chris Gutierrez, and Said Nurmagomedov before turning in a Fight of the Night-winning effort opposite Khalid Taha last time out. 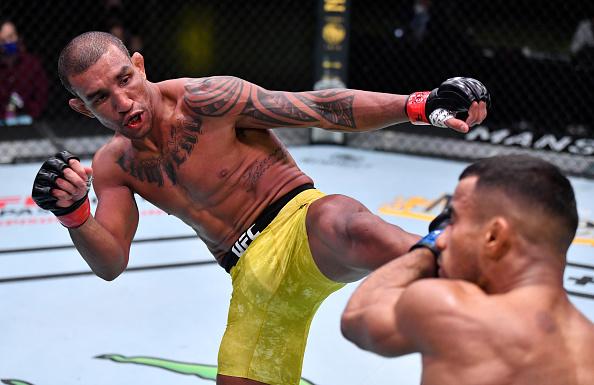 Raoni Barcelos of Brazil kicks Khalid Taha of Germany in a bantamweight fight during the UFC Fight Night event at UFC APEX on November 07, 2020 in Las Vegas, Nevada. (Photo by Jeff Bottari/Zuffa LLC)

A Brazilian jiu jitsu black belt with fundamentally sound striking and a little more pop than he gets credit for, Barcelos is a complete fighter and one of the best-kept secrets on the UFC roster — a dark horse contender that has yet to crack the Top 15 in the talent-rich 135-pound weight class. That being said, there is a very real possibility this weekend will become his breakout moment, as Valiev is a highly regarded competitor in his own right and this pairing is one of the most anticipated matchups of the weekend.

The bantamweight division is arguably the deepest, most competitive collection of athletes from top-to-bottom in the UFC at the moment, and with several high-profile fights in the offing, it wouldn’t be surprising if Barcelos parlayed another impressive showing here into a place in the Top 15 and a date with a more established figure next time out.

If you’re looking for an unranked fighter that could emerge as a legitimate title contender in next 12-18 months, Barcelos wouldn’t be a bad bet; he’s that good.

Undefeated in 13 professional appearances and coming off a first-round submission win over veteran stalwart Alex “Cowboy” Oliveira in his promotional debut, Shavkat Rakhmonov is one of the most intriguing sophomores on the UFC roster.

A professional since the tail end of 2014, the 26-year-old welterweight has never been to the scorecards in his career, holds an earlier career victory over streaking UFC middleweight Junyong Park, and showed no signs of nerves, rust, or anything other than complete confidence when he marched into the Octagon after nearly 14 months on the sidelines and a couple false starts to submit Oliveira last fall on UFC Fight Island. 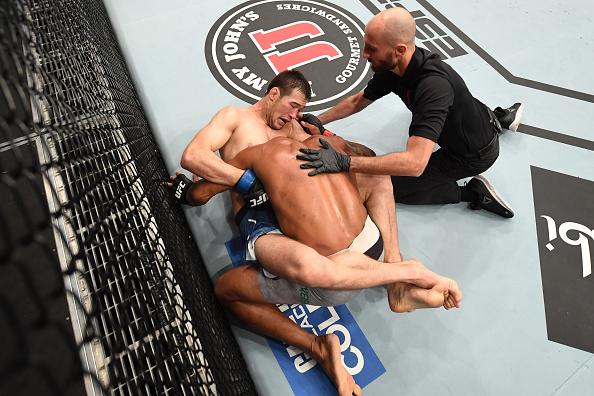 This weekend, “Nomad” returns for his second appearance under the UFC banner, sharing the Octagon with another Brazilian veteran, Michel Prazeres, in what should be another quality measuring stick moment for the unbeaten emerging talent.

The soon-to-be 40-year-old Prazeres had his eight-fight winning streak snapped the last time he stepped into the Octagon, dropping a unanimous decision to Ismail Naurdiev in Prague, Czech Republic in early 2019. Now cleared to return following a two-year ban, the veteran, who holds victories over Gilbert Burns, Mads Burnell, and Zak Cummings, brings a wealth of experience and a suffocating grappling acumen into this matchup with Rakhmonov.

This weekend’s bout is a chance for the gifted newcomer to add another established name to his list of vanquished foes and further expedite his climb towards the top of the welterweight division.

If he can do to Prazeres what he did to Oliveira, Rakhmonov could find himself on a fast track to contention in the 170-pound weight class heading into the back half of 2021.

It was impossible not to feel happy for Ike Villanueva when he registered a second-round knockout win over Vinicius Moreira earlier this year on Fight Island.

A 13-year veteran who toiled on the regional circuit for more than a decade, crossing paths with future UFC competitors Cody Donovan, Justin Ledet, Robert Drysdale, and Trevin Giles before they reached the Octagon, consecutive wins over former UFC athletes Roger Narvaez and Rashad Coulter finally earned Villanueva the chance to compete under the UFC banner last year.

After losing his debut to Chase Sherman, who tested positive for a banned substance following the contest, a gnarly cut brought his sophomore appearance opposite Jordan Wright to a premature halt and sent him into the Moreira engagement with his back against the wall.

But Villanueva came out guns blazing and collected his first UFC win just 39 seconds into the second round, pushing his record 18-11 in the process.

Saturday night, he takes on Marcin Prachnio, who collected his first UFC triumph four days after Villanueva at UFC 257, in what should be an action-packed light heavyweight affair.

Now settled into life on the UFC roster and with his back off the wall, the 37-year-old Villanueva should continue to be an exciting addition to every fight card he’s on and someone capable of making noise in the middle of the light heavyweight ranks. Each of his last seven fights have ended inside the distance, and this one should be no different for the self-described “blue-collar Mexican” who battled hard to finally reach this point and plans on sticking around for a long time.

Don't miss any of this week's fighters on the rise this weekend at UFC Fight Night: Gane vs Volkov, live from the UFC APEX on ESPN+. Prelims begin at 1pm ET/10am PT. Main card begins at 4pm ET/1pm PT.