Find Out Which Fighters Are Trending Upward As We Get Closer To UFC 274: Oliveira vs Gaethje.
By E. Spencer Kyte, on Twitter @SpencerKyte • May. 3, 2022

For just the fourth time in UFC history, the Octagon lands in Phoenix, Arizona this week as UFC 274 comes to life on Saturday night inside the Footprint Center.

The first time the promotion appeared in the land of the Suns, Henry Cejudo made his initial appearance inside the UFC cage and Joanna Jedrzejczyk closed out the prelims with her narrow victory over Claudia Gadelha. A little over two years later, Yair Rodriguez cemented his standing as a future contender in the featherweight division with a main event victory over Hall of Famer BJ Penn.

And the last time the premier organization in mixed martial arts made its home at what was then called the Talking Stick Resort Arena, Vicente Luque earned his breakout Fight of the Night win over Bryan Barberena and Francis Ngannou showed he was very much ready for another shot at the heavyweight title with a rapid first-round knockout win over former champ Cain Velasquez.

I tell you all of that in order to tell you this: Phoenix has been the site of more than a few breakout and breakthrough performances, and there are a handful of competitors hoping to add to that history this weekend.

Here’s a closer look at three of the top candidates.

This is the UFC 274 edition of Fighters on the Rise. 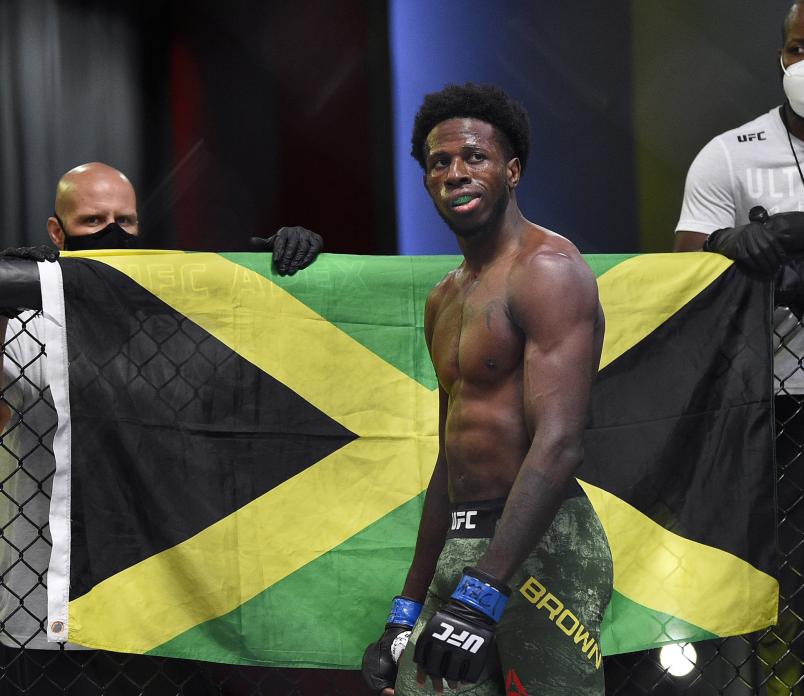 It feels like because Brown stumbled early in his UFC career, people kind of stopped paying attention or have forgotten to check in on the progress that the 31-year-old “Rudeboy” has made over the years. If they did, they would see that the former Lookin’ for a Fight find has developed into a dangerous welterweight with designs on breaking into the Top 15 in 2022.

Since suffering a submission loss in his second UFC appearance, Brown has posted a 7-3 record, including victories over Mickey Gall, Bryan Barberena, Warlley Alves, and Alex Oliveira. Perhaps more indicative of the growth he’s shown is the fact that the only people to get the best of him during that 10-fight stretch are recent headlining foes Belal Muhammad and Vicente Luque, and Niko Price, who ended the bout with hammerfists while laying flat on his back.

RELATED: Randy Brown's Athlete Profile | Brown Put On A Show For His Dad

Brown is 4-1 over his last five with the loss to Luque in August 2020 standing as the only blemish, and he enters Saturday’s clash with Khaos Williams having earned a pair of victories last year. He started his 2021 campaign with a slick one-armed rear-naked choke finish of Oliveira at UFC 261, and then worked through a dislocated toe to collect a unanimous decision win over short-notice replacement Jared Gooden a little less than six months later to push his overall record to 14-4.

The Queens native has been making steady progress throughout his career, but has clearly taken a meaningful step forward over the last couple of campaigns, displaying a greater understanding of how to best deploy his considerable weapons in the cage and fighting with the confidence and swagger of someone that believes he’s deserving of being mentioned among the best fighters in his division.

Saturday’s meeting with Williams is a battle of ascending fighters coming together to determine who will take another step forward in the 170-pound weight class. Like Brown, Williams enters off consecutive victories and having won four of his five UFC appearances, most recently collecting a third-round knockout win over Miguel Baeza.

This should be a tightly contested battle between a pair of welterweight hopefuls, and if Brown can maintain his momentum and collect another quality win, it’ll be hard to deny him a chance to share the Octagon with someone with a number next to their name in his second start of the year. 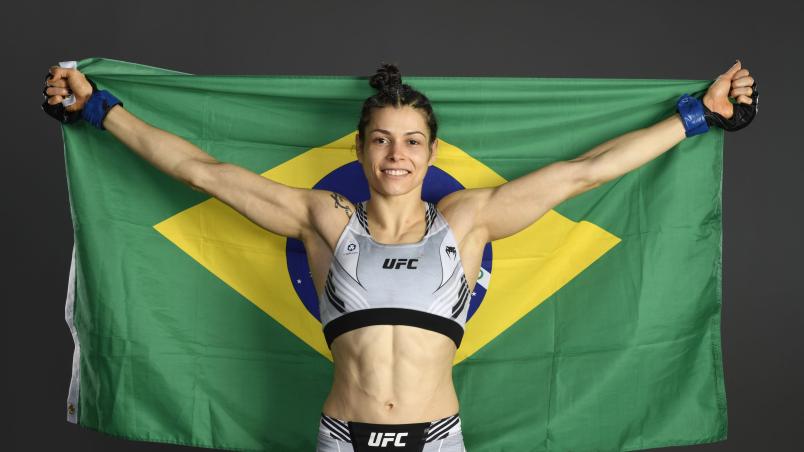 Melissa Gatto of Brazil poses for a post fight portrait backstage during the UFC 265 event at Toyota Center on August 07, 2021 in Houston, Texas. (Photo by Mike Roach/Zuffa LLC)

For a couple years after first being signed by the UFC, Gatto was a mysterious enigma — a young, undefeated Brazilian prospect that would have her debut fight announced, and then be forced to withdraw for one reason or another. It happened twice in 2019, and once more in 2020, turning Gatto into a gigantic question mark in the flyweight division.

She finally made her promotional debut last August, nearly three years after her last appearance, collecting a stoppage victory over Victoria Leonardo at the close of the second round when the Dana White’s Contender Series graduate was unable to continue after sustaining a broken arm.

Just like that, three years of uncertainty and speculation about what the Brazilian brought to the table vanished, and the 26-year-old was transformed into an intriguing name to track in the 125-pound weight class. She made that point emphatically clear four months later when she marched back into the Octagon and took out durable veteran Sijara Eubanks, felling the former Ultimate Fighter contestant with a body kick early in the third round.

This weekend, Gatto squares off with Tracy Cortez in what is easily her most high profile pairing to date.

Cortez has won nine straight since dropping her professional debut, including a split decision victory over Erin Blanchfield, a Contender Series victory over Mariya Agapova, and triumphs in each of her first three UFC appearances. She’s been out of action since last April, but preparing for battle both with her beau, UFC featherweight standout Brian Ortega, and the elite team at Fight Ready MMA.

How To Watch Gatto On UFC 274 | View Gatto's Athlete Profile

If Gatto can walk into the Octagon this weekend and halt the run of the hometown standout Cortez, she could force her way into the Top 15 in the flyweight division. At the very least, the unbeaten talent would put herself in a position to potentially face another of the promising young hopefuls looking to make headway in the 125-pound ranks going forward. 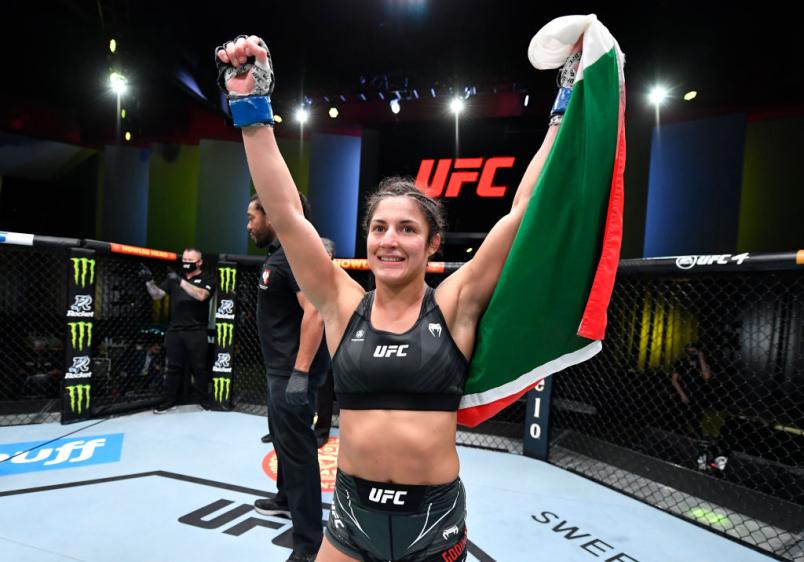 Several years down the road, we’re going to look back on Godinez’s rookie campaign inside the Octagon and shake our heads, jaws agape over the temerity of a fighter competing four times in seven months, including on back-to-back weekends in different weight classes, and having volunteered to take another fight in there as well.

And let me be clear: when I speak of Godinez’s audacity, I say it with nothing but the utmost respect and appreciation for what the Mexican-Canadian grinder did in 2021.

She pushed former title challenger Jessica Penne to the hilt in her debut, landed on the wrong side of a debated split decision verdict, then raised her hand to face Sarah Alpar on short notice roughly a month later, only to be denied the opportunity because she couldn’t secure a visa in time. At the start of October, she made quick work of Silvana Gomez Juarez, and a week later, she moved up to bantamweight and went three rounds with Luana Carolina in a losing effort where her stock only rose.

In November, Godinez climbed into the Octagon for a fourth time in 2021, garnering a unanimous decision victory over Loma Lookboonmee to close out one of the most memorable 2-2 campaigns in recent memory.

Saturday evening, Godinez, who came in at No. 6 in the staff picks for best newcomers last year, begins her sophomore season in the UFC with a compelling matchup against Brazilian powerhouse Ariane Carnelossi.

MORE UFC 274: Oliveira Let's His Fighting Do The Talking | Rose Has 'Leveled Up' | Esparza Out To Solidify Her Legacy

After dropping her UFC debut to Angela Hill in September 2019, the 29-year-old Carnelossi made the second and third starts of her career last year, registering a second-round TKO victory over Na Liang in April and a third-round submission win over Istela Nunes to push her record to 14-2 overall.

The strawweight division is enjoying a moment in the spotlight right now with the title being on the line in Saturday’s co-main event, so this is a tremendous opportunity for the talented 28-year-old to build on her breakout first year inside the Octagon and start building some real momentum in order to make a push towards the rankings in her second year in the UFC.