Fighters On The Rise | UFC 269: Oliveira vs Poirier

See Which Fighters We're Keeping An Eye On Heading Into UFC 269: Oliveira vs Poirier
By E. Spencer Kyte, on Twitter @SpencerKyte • Dec. 7, 2021

The final pay-per-view event of the year brings an incredible slate of fights to T-Mobile Arena this weekend, capped by a pair of highly anticipated championship bouts

In the co-main event, bantamweight queen Amanda Nunes defends her title against challenger Julianna Peña, who has been doggedly pursuing this meeting with “The Lioness” for quite some time, while in the headlining act sees Charles Oliveira defend his lightweight title for the first time against former interim titleholder and No. 1 contender Dustin “The Diamond” Poirier in a clash of tenured UFC talents that will set the course for the future of the 155-pound weight class in 2022 and beyond.

Prior to championship gold going up for grabs, 13 pairs of talented fighters will make the walk to the Octagon, each member of each set looking to use this weekend’s fight card as a chance to wrap up 2021 with a victory and position themselves for bigger and better opportunities next year.

From that group, three stand out as emerging names for you to pay close attention to on Saturday night, as triumphant efforts on Saturday could very well produce critical pairings once the 2022 campaign gets underway.

Here is a closer look at those athletes — this is the UFC 269 edition of Fighters on the Rise.

The heavyweight from Western Sydney, Australia burst onto the scene a little over four years ago with a first-round flying knee finish of Rashad Coulter that earned him a Performance of the Night bonus.

Two more victories followed in the next seven months as he introduced the UFC audience to his patented “shoey” celebration, but then a three-fight losing streak stopped all his momentum. A one-year absence between fights left Tuivasa in the background of the heavyweight ranks, but heading into this weekend’s event in Las Vegas, “Bam Bam” is back to being an intriguing fighter to watch in the big boy ranks.

The 28-year-old squares off with Augusto Sakai on Saturday night at UFC 269, entering on a three-fight winning streak consisting of three consecutive first-round finishes. Last time out, he needed just 67 seconds to dispatch Greg Hardy, and after his middle-third hiccup, it appears like Tuivasa is once again primed to make a run at the Top 10. 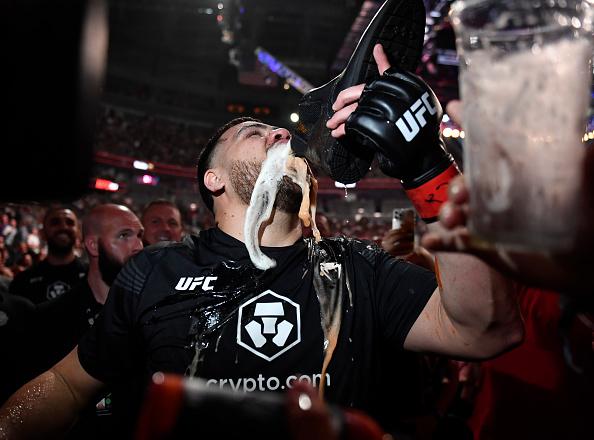 Tai Tuivasa of Australia reacts after knocking out Greg Hardy in their heavyweight fight during the UFC 264 event at T-Mobile Arena on July 10, 2021 in Las Vegas, Nevada. (Photo by Chris Unger/Zuffa LLC)

What makes Tuivasa such an interesting fighter to track heading into Saturday’s showdown with Sakai is that you can understand the ebbs and flows of his career to this point.

He reached the UFC as a 24-year-old kid with limited experience, and then faltered when he was forced to contend with seasoned veterans like Junior Dos Santos and Blagoy Ivanov, and a more technical, grappling-based newcomer in Serghei Spivac. But now he’s a little older, a little wiser, and knows he can’t simply overwhelm folks with his power and surprising athleticism, and he’s made adjustments.

He still hits like a Mack truck and can do things you don’t expect someone of his stature to do so effortlessly, but he’s also got four years’ experience competing on the biggest stage in the sport, and is just now reaching that point where talented fighters often start to hit their stride and climb the ladder.

André Muniz has won seven consecutive fights and 15 of his last 16 appearances, including all three of his UFC appearances to date. Last time out, “Sergipano” collected a first-round technical submission victory over longtime title contender Ronaldo “Jacare” Souza, becoming the first person to submit the Brazilian in MMA competition.

Despite his current run of success and impressive outing in May at UFC 262, the 31-year-old remains on the outside looking in when it comes to the Top 15 in the middleweight division. After briefly cracking the rankings following his victory, the recent slate of results in the division have bumped him from the collection of fighters sporting numbers next to their names, but in terms of results and skills, Muniz most certain has what it takes to compete with anyone in that group. 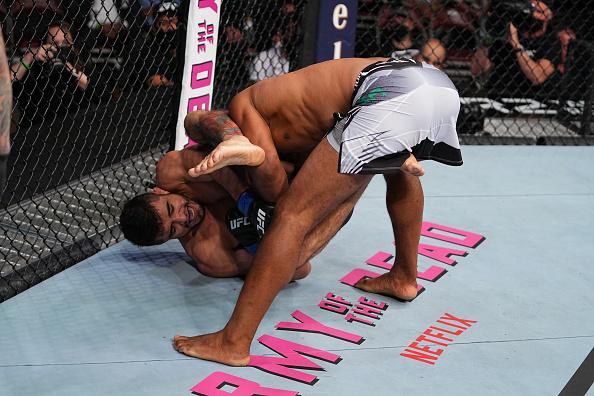 Originally slated to meet South African finisher Dricus Du Plessis before an injury forced “Stillknocks” from the fight card, the Brazilian will now square off with Eryk Anders instead, aiming to continue his unbeaten run inside the Octagon, extend his lengthy winning streak, and position himself for a bout with a ranked opponent in the first half of 2022.

Muniz is like Demian Maia crossed with Michael Chiesa — a better striker than most expect from someone lauded for their grappling abilities, like Chiesa, but the kind of guy, like Maia, that you do not want to get a hold of you at any time. He’s earned finishes in all but two of his 21 career wins and has lost just once in the last eight years.

If you’re looking for a dark horse contender in the 185-pound weight class, Muniz is as good a horse as any to back.

In a division loaded with impressive young talents, Erin Blanchfield might be the best of the bunch.

The 22-year-old Brazilian jiu-jitsu black belt is already 7-1 as a professional, having turned in a dominant performance against Sarah Alpar in her promotional debut in September and earning wins over the likes of Kay Hansen, Victoria Leonardo, and Brogan Walker-Sanchez prior to reaching the UFC. Her lone setback came under the Invicta FC banner in a clash with fellow flyweight hopeful Tracy Cortez by split decision, with plenty of onlookers feeling like the judges got it wrong 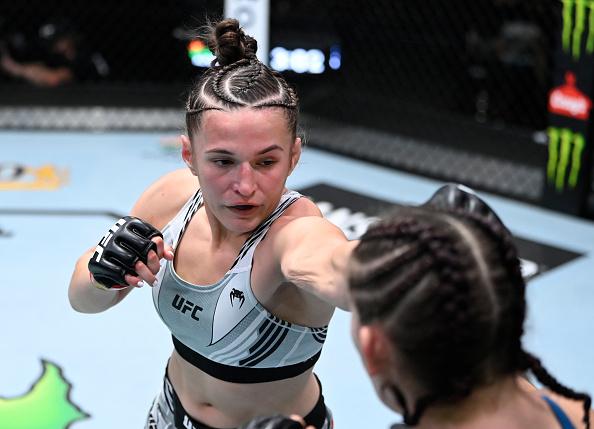 Regardless of the scoring of that contest, it’s obvious watching Blanchfield operate inside the cage that she is an incredible prospect and someone to keep eyes on going forward. Her grappling is excellent and while her striking remains a work in progress, she’s 22, is a tireless worker, and has some of that Jersey “don’t *%$@ with me” swag that means she’s not afraid to mix it up even if her hands aren’t polished yet.

This weekend, Blanchfield squares off with Miranda Maverick, who stepped in for Maycee Barber, in a battle of two of the top young fighters on the UFC roster. This will be an outstanding measuring stick moment for the UFC sophomore and if she handles this test the way she did her first assignment inside the Octagon, don’t be surprised if Blanchfield gets an expedited push in 2022. 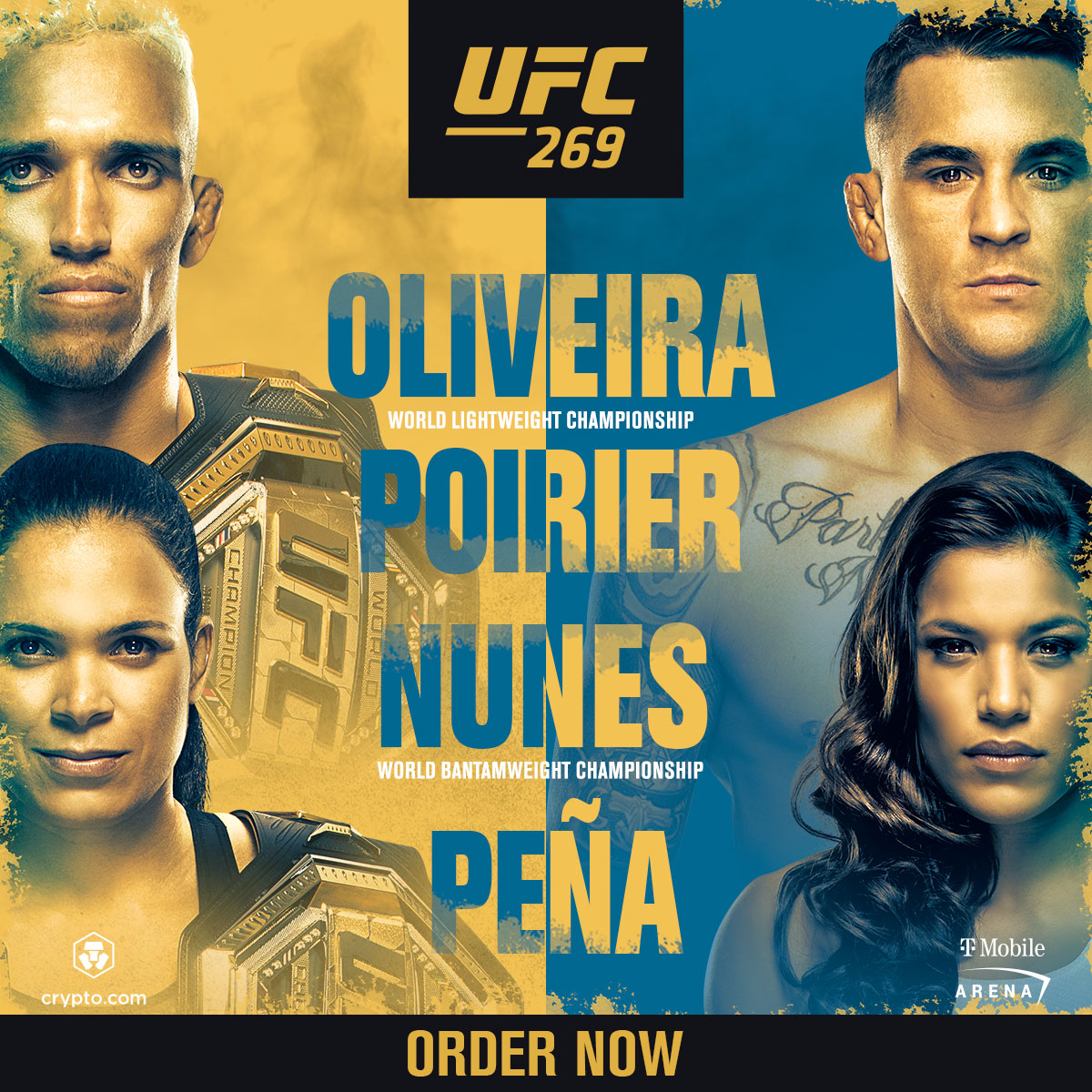 Don't miss any of these fighters on the rise at the final pay-per-view of the year at UFC 269: Oliveira vs Poirier, live from T-Mobile Arena on ESPN+. Prelims begin at 5:30pm ET/2:30pm PT. Main card begins at 10pm ET/7pm PT.