See Which Fighters Are Steamrolling Into UFC 268: Usman vs Covington 2
By E. Spencer Kyte, on Twitter @SpencerKyte • Nov. 2, 2021

After a one-year absence, the UFC returns to Madison Square Garden for its annual November blockbuster, and this year’s installment certainly fits the bill.

Capped by a pair of championship rematches where the titleholders are looking to further assert their dominance against previously vanquished foes, UFC 268: Usman vs Covington 2 is one of the deepest, most intriguing collection of fights put together this year, and the slate of emerging names scheduled to make the walk to the Octagon this weekend is amongst the best in 2021 as well.

Each of the three up-and-coming talents featured below carry a wealth of upside into the cage this weekend, standing as some of the brightest, more interesting additions to the roster in recent years. Crazy as it may be to say about a pair of debuting athletes and a middleweight making his fourth UFC start, there is a real possibility at least one of these men will fight for UFC gold in the coming years, if not two of them, and perhaps even all three.

Here’s a closer look at the impressive trio of emerging talents set to make the walk at MSG this weekend.

This is the UFC 268 edition of Fighters on the Rise.

It’s not often that a fighter with just four professional MMA appearances making their UFC debut lands in this space, but Pereira isn’t your typical newcomer.

The 34-year-old Brazilian is a legitimate world-class kickboxer — the former Glory middleweight and light heavyweight titleholder, and the first person in the promotion’s history to simultaneously hold two titles at the same time. Included in the 33 career victories he amassed during his kickboxing career are two wins over reigning UFC middleweight titleholder Israel Adesanya — one by decision, the other by knockout.

Pereira made three appearances in MMA several years ago, losing his debut by submission before winning his next two fights, but then pressed pause to focus on his kickboxing career. Last November, he returned to the cage and registered a first-round stoppage victory, knocking out Thomas Powell with a sharp left hook in the main event of LFA 95. He signed with the UFC earlier this fall and debuts this weekend against Greek veteran Andreas Michailidis, who registered a unanimous decision victory over KB Bhullar in his return to middleweight earlier this year.

.@GloverTeixeira warming up with #AlexPereira before the main event of #UFCVegas13. 🇧🇷

It’s difficult to forecast what the future may hold for Pereira, as he’s making the full-time transition into mixed martial arts later than most, but he also arrives with a tremendous kickboxing pedigree, undeniable quickness and power, and the height and reach that makes him an intriguing figure in the 185-pound weight class.

People will look to connect the dots between Pereira and Adesanya, pointing to his victories over “The Last Stylebender” and Izzy’s subsequent success inside the Octagon, believing the Brazilian newcomer will be able to replicate his efforts. But it’s an unfair comparison and unreasonable expectation, not only because it packages what Adesanya has done as easily replicable (it’s not), but also sets the bar extremely high for Pereira, who has one-third of the MMA experience his former rival had prior to his UFC debut and just a single appearance in the last five years to build upon.

This fight with Michailidis should serve as a good gauge of where Pereira’s skills stand and what can be expected of him inside the Octagon going forward, as the 33-year-old is a 17-fight veteran, has faced some solid competition over the years, and has already logged a couple trips into the UFC cage.

This feels like a classic “don’t overreact to one result” situation, but given all his success as a kickboxer and his history with Adesanya, if Pereira looks impressive on Saturday night in New York City, expect to hear a lot more about him on Sunday morning.

Originally scheduled to compete on Season 4 of Dana White’s Contender Series against streaking Brazilian Gregory Rodrigues, who earned his second consecutive UFC victory a couple weeks ago with a hellacious knockout win over Junyong Park, Imavov instead made the move straight to the Octagon, squaring off last October with the man who replaced him in that clash with Rodrigues, Jordan Williams.

The Russian-born, Paris-based middleweight earned a unanimous decision win over Williams to extend his winning streak to six but had that run of success snapped four months later in a grueling, hard-fought battle with Phil Hawes. While it was a grimy, grappling-heavy battle, the loss to Hawes was the kind of performance that still resulted in Imavov coming away looking better than he did going in, and in his next appearance, the 25-year-old took a big step towards breaking into the Top 15. 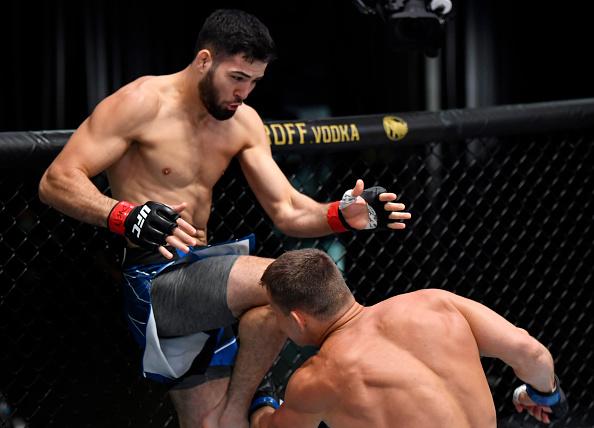 Nassourdine Imavov of Russia throws a flying knee against Ian Heinisch in their middleweight fight during the UFC Fight Night event at UFC APEX on July 24, 2021 in Las Vegas, Nevada. (Photo by Jeff Bottari/Zuffa LLC)

Paired off with Ian Heinisch in July, Imavov weathered the early storm from “The Hurricane” and put him away in the second, using his long-range weapons to stick the veteran from distance before burying a knee into his midsection and finishing with ground-and-pound. The fight with Hawes put Imavov on the radar, and his efforts against Heinisch made him a fighter on the rise in the middleweight division.

This weekend, he has a chance to break into the Top 15 as he shares the Octagon with Edmen Shahbazyan, as the 23-year-old “Golden Boy” returns to action for the first time since May looking to snap a two-fight skid. After rattling off 11 consecutive victories to begin his career, including four straight under the UFC banner that propelled him into the rankings, Shahbazyan has faltered over his last two outings, suffering a third-round stoppage loss to Derek Brunson last summer before getting decisioned by Jack Hermansson earlier this spring.

Following up his battle with Hawes and victory over Heinisch with a victorious effort over Shahbazyan on Saturday would not only catapult Imavov into the rankings, but it would send him into 2022 as the top emerging talent in the 185-pound weight class, as well. He has the tools and training to accomplish this feat, and regardless of the outcome of this weekend’s contest, Imavov is one to keep an eye on going forward.

Nicknamed “The Future,” Garry certainly looked the part during his seven-fight run under the Cage Warriors banner, opening with a decision win in February 2019 before rattling off five consecutive finishes and wrapping up his time with the promotion by claiming the vacant welterweight strap with a unanimous decision victory over Jack Grant.

After claiming the title and inking his UFC deal, Garry crossed the Atlantic and set up shop at Sanford MMA in Deerfield Beach, Florida, surrounding himself with an all-star cast of coaches and training partners to help prepare him for the challenges that await him inside the Octagon, starting with Williams on Saturday.

The 31-year-old NorCal native, who moved to Colorado and now trains at Factory X Muay Thai, has landed on the wrong side of the results in his first two UFC starts, dropping a decision to Imavov before moving down to welterweight and getting submitted by Mickey Gall last time out. That said, Williams has slightly more experience than Garry and proven pop in his hands, making him someone the newcomer cannot take lightly.

When your Mam says you can’t be the next @TheNotoriousMMA … pic.twitter.com/y9UKsXDj7t

Brandishing the nickname he does is sure to bring added attention and scrutiny, but there is a lot to like about Garry and his potential going forward.

He’s huge for the division at six-foot-three and turns 24 less than two weeks after this event, meaning he’s still several years away from his physical prime. Combine that with crisp, fluid striking, a world of confidence, and the smarts to bring himself Stateside to train with an elite team in South Florida, and there are plenty of reasons to be excited about Garry and the upside he brings to the Octagon.