Fighters On the Rise: September 19 Edition

Take a closer look at three fighters poised to emerge ahead of their bouts on September 19
By E. Spencer Kyte, on Twitter @SpencerKyte • Sep. 13, 2020

This weekend, the premier fight promotion on the planet is going to go out with a bang before heading back to Fight Island, as Saturday’s fight card is laced with exciting and intriguing matchups and capped by one of the longest standing feuds in the sport coming to a head.

After more than two years of jawing at one another, welterweight rabble-rouser Colby Covington and former champion Tyron Woodley will finally step into the Octagon together this weekend to settle their differences, or, at the very least, punch each other in the face a few times and momentarily feel better about things because let’s be honest: these two aren’t ever going to fully squash this beef.

Saturday’s card at the Apex also features a key light heavyweight clash between Johnny Walker and Ryan Spann, a potential fireworks display at welterweight between Donald “Cowboy” Cerrone and Niko “The Hybrid” Price, and a host of other quality pairings that should produce excitement.

And, as always, there is the opportunity to get a closer look at a trio of tremendously talented emerging prospects, all of whom have flashed a great deal of potential to this point in their respective careers and are on the precipice of elevating their games to the next level.

This is the September 19 edition of On the Rise. 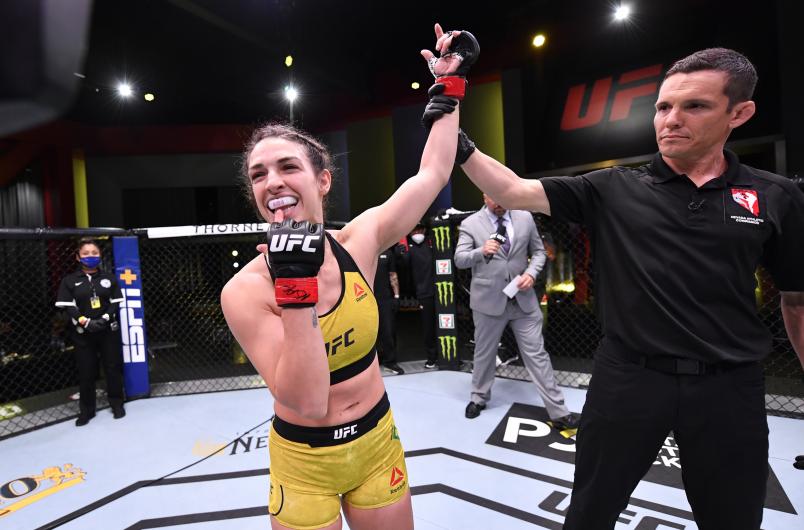 LAS VEGAS, NEVADA - MAY 30: Mackenzie Dern celebrates after her submission victory over Hannah Cifers in their strawweight fight during the UFC Fight Night event at UFC APEX on May 30, 2020 in Las Vegas, Nevada. (Photo by Jeff Bottari/Zuffa LLC)

LAS VEGAS, NEVADA - MAY 30: Mackenzie Dern celebrates after her submission victory over Hannah Cifers in their strawweight fight during the UFC Fight Night event at UFC APEX on May 30, 2020 in Las Vegas, Nevada. (Photo by Jeff Bottari/Zuffa LLC)
Mackenzie Dern

After grinding out a decision win over Ashley Yoder in her promotional debut, Dern showed her elite submission skills in her sophomore appearance against Amanda Cooper, finishing the TUF finalist via rear naked choke in less than half a round at UFC 224 in Rio de Janeiro. Nine months after securing her seventh consecutive victory, Dern announced she was pressing pause on her career to welcome her first child, giving birth to a daughter, Moa, in June 2019.

She lost her return to the Octagon four months after the birth of her daughter to rising Brazilian star Amanda Ribas, but rebounded at the end of May with a first-round submission win over Hannah Cifers, becoming the first female fighter in UFC history to earn a leg lock finish after forcing the veteran to tap to a kneebar.

Now 8-1, Dern takes another step up in competition this weekend as she squares off with divisional stalwart Randa Markos in what should serve as another litmus test moment for the talented grappler.

No one has ever questioned Dern’s abilities on the mat or the impact she could potentially make in MMA; both are well-established and obvious. Her victory over Cifers showcased how quick and dangerous she can be on the canvas, as she latched onto the leg amidst a scramble and had Cifers tapping in no time. However, it also highlighted the areas where Dern needs to continue to show improvement, as she got out-muscled in the clinch and her standup is still a work in progress.

Markos is a veteran competitor who is solid everywhere and will force Dern to work for everything on Saturday night. Coming in off her own loss to Ribas, the Windsor, Ontario-based Ultimate Fighter alum will be looking to maintain her streak of never posting consecutive results inside the Octagon and it will be up to Dern to impose her will and assert herself inside the cage if she hopes to break Markos’ unique pattern of performances this weekend.

The breakout star from the first trip to Fight Island is back in the Octagon this weekend as Khamzat Chimaev makes his Las Vegas debut against veteran grappler Gerald Meerschaert.

The 26-year-old Chimaev opened a lot of eyes when he took a short-notice fight against John Phillips in mid-July and mauled the Welsh veteran, finishing with a hail of unanswered blows early in the second round. When he lobbied to fight again quickly, the UFC obliged, booking the unbeaten prospect a welterweight bout against Irish prospect Rhys McKee 10 days later.

Chimaev was even more impressive in his sophomore effort, pitching a shutout against McKee to send the online MMA community buzzing, with some likening him to unbeaten lightweight ruler Khabib Nurmagomedov and others suggesting he would beat two-thirds of the talent in the welterweight Top 15 right now if given the opportunity.

That buzz is sure to ratchet back up to high levels this week as Chimaev readies to step in with Meerschaert, the Roufusport product who will be making the walk for the 45th time in his career on Saturday night. Meerschaert is a 13-year pro and dangerous on the ground, with 23 of his 31 career victories coming by way of submission, which makes him an interesting dance partner for Chimaev at this point, given the undefeated prospect’s propensity for putting opponents on the ground and keeping them there.

If Chimaev can do something comparable to what he did against Phillips or McKee against Meerschaert this weekend, the Allstars Training Center representative will put himself on an expedited path to contention and in position for another big fight the next time out.

There will be a ton of attention focused on him heading into this one and the pressure to live up to his advanced billing sits on his shoulders, but thus far, “Borz” has been dominant and it will be interesting to see if he can remain that way this weekend against his toughest opponent to date. 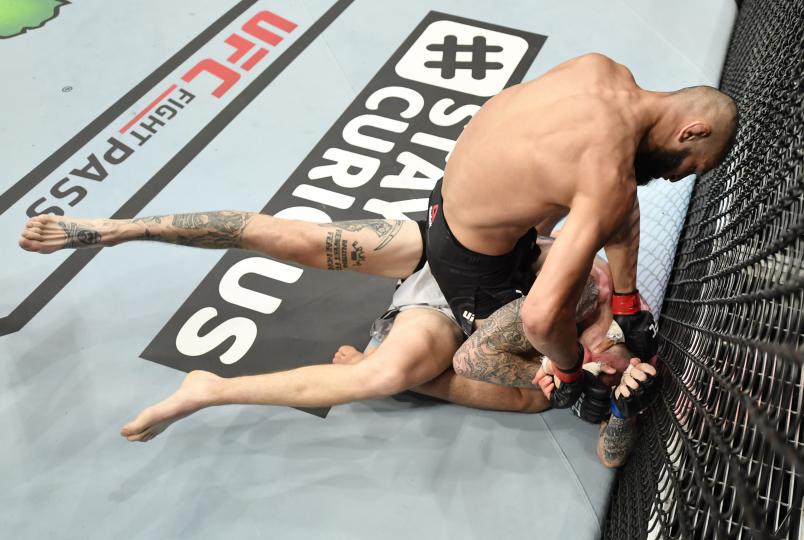 Long considered one of the top prospects in Canada, 22-year-old TJ Laramie punched his ticket to the UFC five weeks ago with a first-round stoppage win over Daniel Swain on the Contender Series. After avoiding a couple early submission attempts, the Windsor-based featherweight assumed control of the fight and roughed up Swain on the canvas, resulting in the bout being halted following the first round after the veteran from the Pacific Northwest complained about a rib injury.

Now 12-3 as a professional and riding a four-fight winning streak, Laramie makes his UFC debut on Saturday against Midwest regional veteran Darrick Minner, who came up short in his Contender Series appearance last summer and lost a short-notice assignment against Grant Dawson back in February.

While there are often concerns about how a young fighter will deal with the transition from the regional ranks to competing on the biggest stage in the sport, that isn’t as much of a concern with the Canadian newcomer, as he’s been in the spotlight for the majority of his career and headlined each of his last six appearances prior to showing out on the Contender Series last month. Laramie, who made his pro debut in March 2015 as a 17-year-old with a win over Koshi Obata in Japan, already holds a unanimous decision win over UFC featherweight Charles Jourdain and shows a ton of potential as a compact powerhouse still years away from reaching his athletic prime.

The 145-pound weight class is stacked, so there is no need to rush Laramie into the deep end of the talent pool at the moment, but the promising newcomer is one to watch long term, and if he keeps performing the way he has of late, a step up in competition and accelerated move up the divisional ladder will be inevitable.