Three Warriors To Keep On Your Radar At Saturday's Fight Night: Holm vs Aldana
By E. Spencer Kyte, on Twitter @SpencerKyte • Sep. 27, 2020

The second event in the UFC’s return to Fight Island is headlined by a highly anticipated clash that could determine the next title challenger in the bantamweight division.

Originally scheduled to face off earlier this summer, former champion Holly Holm and surging contender Irene Aldana clash this weekend in a critical bout in the 135-pound weight class. A fixture in the title picture throughout her UFC tenure, Holm enters off a patient, measured victory over Raquel Pennington, while the streaking Aldana arrives having earned victories in five of her last six bouts and coming off a blistering first-round knockout of previously unbeaten Brazilian Ketlen Vieira last time out.

With divisional queen Amanda Nunes once again set to defend her featherweight title later this year, the winner of Saturday’s headlining contest would certainly have a strong case for challenging “The Lioness” for the bantamweight strap in 2020.

But before the bantamweight headliners hit the Octagon, a player in the 135-pound ranks and a pair of Contender Series grads look to use Saturday night’s event at the Flash Forum in Abu Dhabi as a chance to grab some of the spotlight for themselves and position themselves for more opportunities as the final quarter of 2020 begins.

This is the October 3rd edition of On the Rise.

The former Ultimate Fighter winner is someone who faded into the background of the title conversation in the bantamweight division following her submission loss to Valentina Shevchenko and subsequent hiatus after giving birth to her first child. But “The Venezuelan Vixen” returned to action last summer with a unanimous decision win over Nicco Montano and is set to step back into the Octagon on Saturday in a crucial clash against recent title challenger and former featherweight titleholder Germaine de Randamie.

Pena just turned 31 and is 5-1 in the UFC, including victories over Montano, Cat Zingano, and Jessica Eye. She was viewed as a potential contender when she ran through the competition on Season 18 of The Ultimate Fighter, becoming the first female winner in the show’s history, and was a serious title challenger when she faced Shevchenko. Motherhood didn’t change any of that and her performance against Montano showed she’s still a potential force in the division.

Pena is a gamer and a grinder whose greatest attribute is her steely demeanor and dogged determination, which, combined with solid striking and underrated grappling, makes her a dark horse candidate to earn a title shot in 2021, provided she can get by de Randamie on Saturday.

“The Iron Lady” is perfect in the UFC against fighters not named Amanda Nunes, boasting a 6-0 record across two divisions in bouts against the likes of Julie Kedzie, Holly Holm, and Aspen Ladd, and is the kind of established top of the food chain talent Pena needs to beat in order to remind people of her talents and put herself back on the short list of contenders in the bantamweight ranks.

She looked good grinding out a victory over Montano after more than two years, bouncing back after a sluggish first round to control the action over the final two frames and secure the unanimous decision victory. Having shaken off the rust and logged another year further sharpening her skills, the potential is there for Pena to really open some eyes this weekend in Abu Dhabi. 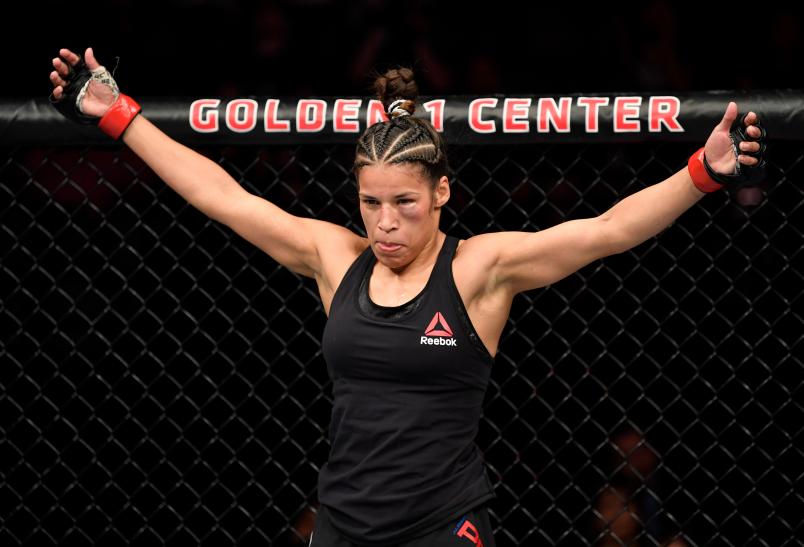 SACRAMENTO, CALIFORNIA - JULY 13: Julianna Pena acknowledges the crowd before the third round of her women's bantamweight bout against Nico Montano during the UFC Fight Night event at Golden 1 Center on July 13, 2019 in Sacramento, California. (Photo by Jeff Bottari/Zuffa LLC/Zuffa LLC via Getty Images)

SACRAMENTO, CALIFORNIA - JULY 13: Julianna Pena acknowledges the crowd before the third round of her women's bantamweight bout against Nico Montano during the UFC Fight Night event at Golden 1 Center on July 13, 2019 in Sacramento, California. (Photo by J

You really have to applaud Jordan Williams for his self-belief and tenacity.

The now 29-year-old middleweight, who makes his UFC debut on Saturday opposite Nassourdine Imavov, turned up on the second season of Dana White’s Contender Series and scored a third-round stoppage win over Tim Caron. That result was overturned after Williams tested positive for marijuana metabolites following the contest, so after getting back into the win column, he returned to Las Vegas last summer to face unbeaten prospect Ramazan Kuramagomedov in his second Contender Series appearance.

While many believed the NorCal Fighting Alliance representative won the bout, including the UFC President, the judges felt otherwise, which meant Williams was headed back to the regional circuit. Once he got there, he found it impossible to get a fight, so when he turned back up at the UFC Apex a couple weeks back for his third appearance on the Contender Series, it was his first bout since his controversial loss the previous summer.

But his persistence paid off, as Williams walked down Brazilian veteran Gregory Rodrigues and dropped him along the fence just over two minutes into their headlining clash, securing himself a UFC contract.

That performance against Rodrigues and all of his Contender Series bouts, actually, show you exactly what to expect from the 9-3 newcomer — forward pressure, high impact power, and a willingness to eat one to land one, trusting that his shots will do more damage.

Imavov is an intriguing new arrival in his own right — a 24-year-old coming off a win over UFC vet Jonathan Meunier who trains under Fernand Lopez at the MMA Factory in Paris — but Williams’ difficult journey through the Contender Series to the Octagon and the fact that he’s firmly in his prime give him the greater potential to make an immediate impact in their joint debuts this weekend.

The UFC audience has Dusko Todorovic to thank for introducing them to Khamzat Chimaev because it was the unbeaten middleweight having to withdraw from his scheduled fight with John Phillips than opened the door for the surging breakout star to step into the Octagon for the first time during the UFC’s initial trip to Fight Island.

Now ready to compete, the 26-year-old Todorovic aims to build on his Contender Series win over Canadian veteran Teddy Ash with a similar showing in his first foray into the UFC cage as he takes on Dequan Townsend this weekend.

Unbeaten in nine professional bouts, Todorovic choked out fellow Contender Series alum Alexander Poppeck early in his career and stopped UFC welterweight wild man Michel Pereira in the opening round of their clash just under two years ago, so while Saturday marks the first time he’s crossed the threshold into the Octagon, Todorovic has already tested himself against some quality competition.

His win over Ash was one of only a dozen times a fighter has earned a UFC contract by winning a decision on the Contender Series over the first three seasons of the talent search series, and it highlighted his resiliency and ability to navigate challenging waters against a tough, seasoned opponent. Saturday’s pairing with Townsend is a chance to shake off the rust from not having fought since last summer and measure himself against a battle-tested veteran who has made the walk to the Octagon three times and has three-times as many professional appearances.

Things remain fluid in the middle of the middleweight division at the moment and this is a great chance for Todorovic to introduce himself to the UFC audience and make his case for being someone to keep close tabs on heading into the final three months of 2020 and beyond.