Fighters On the Rise: June 27 Edition

Here’s a closer look at three athletes hoping to forge a path to the top of their respective divisions at this weekend's Fight Night
By E. Spencer Kyte, on Twitter @SpencerKyte • Jun. 21, 2020

This Saturday, the UFC wraps up a series of five consecutive events at the Apex in Las Vegas with a bang, delivering another exciting fight card flooded with compelling matchups and intriguing talents, capped by a lightweight barnburner between Dustin Poirier and Dan Hooker.

Ahead of the headliners hitting the Octagon, a collection of emerging talents looking to catapult themselves to greater levels of recognition and take another step forward in their quest to reach the top of their respective divisions will cross the threshold into the UFC cage.

Here’s a closer look at that triumvirate of up-and-coming competitors.

This the June 27 edition of On the Rise.

The 24-year-old Roufusport product is one of five fighters to hold the LFA middleweight title and graduate to the UFC, and this weekend, Allen will look to become the first of that group to earn three straight victories inside the Octagon. Much like former LFA champs Eryk Anders and Ian Heinisch, Allen won his first two fights under the UFC banner, registering a second-round submission win over Kevin Holland in his debut before following it up with a first-round finish of Tom Breese earlier this year.

Now riding a six-fight winning streak, Allen was originally supposed to face Heinisch this weekend, giving him a chance to share the cage with a ranked opponent for the first time in a matchup he’s been chasing since their days on the regional circuit together that also offered him a chance to earn a measure of revenge for his teammate and training partner Gerald Meerschaert, whom Heinisch knocked out in 74 seconds earlier this month. But with Heinisch forced from the fight card, Allen will instead share the cage with another promising middleweight upstart as he welcomes fellow Contender Series alum Kyle Daukaus to the Octagon for the first time.

Despite the opponent change, Allen’s future prospects continue to burn bright. Forecasted to be an impact addition to the UFC roster ahead of his appearance on the Contender Series last summer, Allen fought a tough slate on the regional scene, with his only setbacks coming against current UFC fighters Anders, Trevin Giles, and Markus Perez.

After earning his contract with a first-round submission win over Canadian prospect Aaron Jeffery last July, the Louisiana native has been as good as advertised, if not better, through his first two trips into the Octagon. Holland is a handful who has since rebounded with a 39-second stoppage win, and Breese was once considered a top prospect, and Allen patiently and methodically worked to finish both.

This weekend’s fight is another chance for the streaking middleweight to prove he’s one of the top young stars in the division — perhaps the entire UFC — and move one step closer to securing a place in the Top 15.

The 10 months between Worthy’s UFC debut and his sophomore appearance in the Octagon this weekend against Luis Pena have caused some to forget that the 33-year-old lightweight from Pittsburgh had one of the most impressive upset victories of 2019.

Tabbed to face friend and former training partner Devonte Smith on four days’ notice at UFC 241 last August, Worthy walked into the cage showing no signs of jitters and halted Smith’s six-fight winning streak in startling fashion, dropping the Factory X Muay Thai product with a left hook late in the first round.

For the majority of the round, the duo had been sniping at each other from range, with Smith starting to batter Worthy’s lead leg with low kicks. But when Smith stepped forward looking to close the distance in the final minute, Worthy uncorked a short left hook inside that landed flush and put his opponent on roller skates. From there, the finish was academic.

After having a pair of assignments go by the boards due to schedule changes caused by the COVID-19 pandemic, Worthy finally makes his second trip into the Octagon this weekend opposite Pena in a battle between two fighters looking to make headway in the loaded lightweight division.

A fan favorite coming off Season 27 of The Ultimate Fighter, Pena has posted a 4-2 record through his first half-dozen UFC appearances, though each of his setbacks have come by split decision. Boasting incredible length and flexibility for the division, “The Violent Bob Ross” has shown flashes of potential and is the second consecutive promising lightweight hopeful to stand across the cage from Worthy.

While his victory over Smith put him on the map with the UFC audience, this is an even more important assignment for Worthy, as fighters who make splashy debuts are often judged more sharply based on what they do for an encore. Pena poses some challenges with his size and grappling acumen, but if Worthy is able to follow up his blistering debut with an equally impressive sophomore showing, he’ll prove he’s much more than a one-hit wonder and earn himself a step up in competition next time around.

One of the most intriguing graduates from the third season of the Contender Series, Woodson is an undefeated featherweight who stands six-foot-two ½ and brandishes a 78-inch reach. For the sake of comparison, UFC light heavyweight champ Jon Jones stands six-foot-four and has an 84.5-inch reach.

What adds to the intrigue surrounding the 28-year-old Woodson is that he uses his length extremely well for someone who is just seven fights into his professional career, and mixes in flying knee attacks that cover a tremendous amount of distance and land with serious force, as witnessed in his Contender Series win over Terrance McKinney last summer.

The St. Louis native followed up his contract-winning turn with a unanimous decision win over durable vet Kyle Bochniak in his promotional debut, sweeping the scorecards with a 10-8 score from one judge mixed in for good measure. This weekend, in his second foray into the Octagon, he takes on another Kyle — Canadian veteran Kyle Nelson, who snapped a two-fight skid and picked up his first UFC victory last time out as well.

A six-fight winning streak that included victories over Jonathan Brookins and Khama Worthy earned Nelson a call to the Octagon, where he was thrown into the deep end of the pool, outside of his division in his debut loss to Diego Ferreira. After tiring and getting tapped by Matt Sayles in his sophomore showing, “The Monster” came out guns blazing with his back against the wall in his third appearance last fall, putting away Marco Polo Reyes with a powerful barrage of strikes along the fence 96 seconds into the fight.

This is a slight step up in competition for Woodson, as Nelson has more than twice as many professional fights and has shared the cage with far more seasoned opposition over the course of his career, but if “The Sniper” can once again utilize his long-range attacks and turn aside the Canadian, he should establish himself as someone to keep close tabs on going forward in the loaded featherweight division. 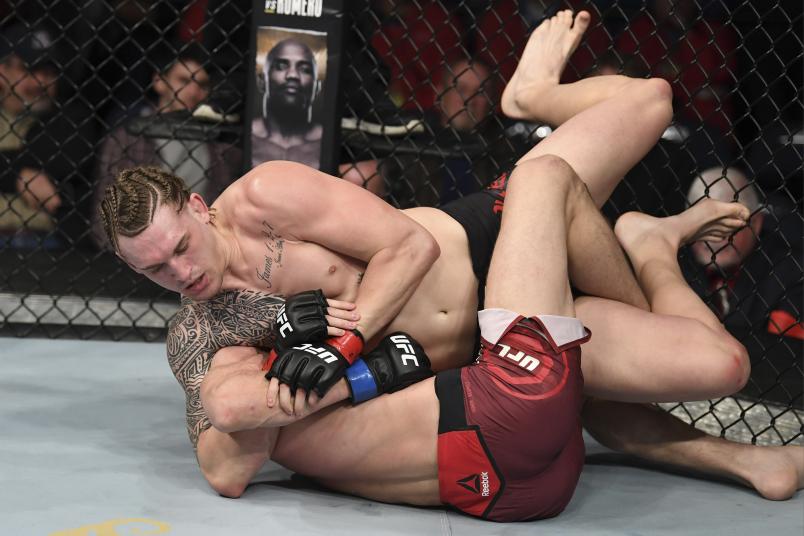 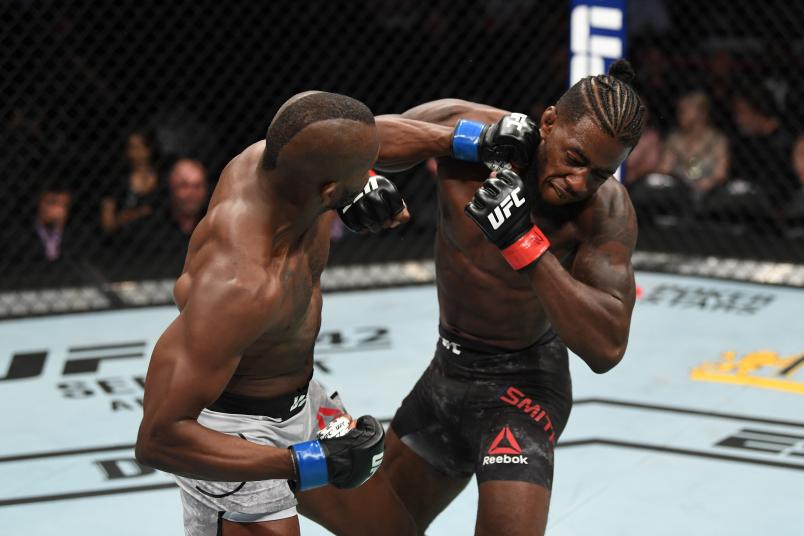