Fighters On the Rise: June 20 Edition

Take a closer look at three fighters poised to emerge ahead of their bouts on June 20's Fight Night
By E. Spencer Kyte, on Twitter @SpencerKyte • Jun. 14, 2020

The parade of quality fights making their way to the Octagon continues this weekend with another outstanding collection of pivotal bouts across multiple divisions set to take place on Saturday, capped by a colossal heavyweight clash between Curtis Blaydes and Alexander Volkov.

As has been the case over the last couple of weeks, this fight card also features a group of emerging talents looking to use this opportunity to catapult themselves further up the rankings or establish themselves as names to remember in their respective divisions.

This is the June 20 edition of On the Rise.

“Hurricane Shane” is another one of those fighters who has flown under the radar in a stacked division.

Remember a few weeks back when everyone was raving about Bryce Mitchell’s performance against Charles Rosa because of how respected and accomplished Rosa is as a fighter? Burgos stopped the Massachusetts native in his sophomore appearance in the Octagon three years ago. That victory pushed his record to 9-0 and since then, he’s added four more victories in five fights, with his only setback coming in a tremendously entertaining scrap with Calvin Kattar at UFC 220 that was even heading into the third round, where Kattar got the finish.

This weekend feels like a prime opportunity for the 29-year-old New Yorker to break out as he squares off with Josh Emmett in a matchup of Top 10 fighters in the ultra-competitive featherweight ranks. Entering on a three-fight winning streak, a victory over the Sacramento native would give Burgos his biggest victory to date and move him another step closer towards challenging the top fighters in the division.

Emmett has won four of his last five overall and each of his last two appearances in devastating fashion, following up his third-round knockout win over Michael Johnson with a first-round finish of Mirsad Bektic in July. Thus far, only veteran Jeremy Stephens has been able to get the better of the Team Alpha Male staple at featherweight, so if Burgos can become the second man to defeat him, it should put him on the radar and in line for another step up in competition next time out. 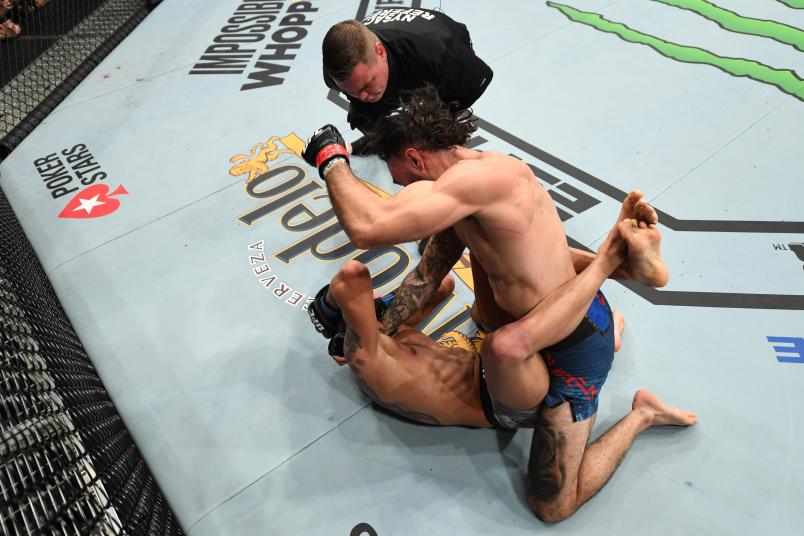 Van Buren’s record says she’s on a six-fight winning streak heading into this clash with divisional stalwart Tecia Torres, but that doesn’t quite paint a complete picture.

After returning from a 1,204-day hiatus in the summer of 2018 with a victory over Angela Samaro, “The Bull” made her successful return to the Invicta FC cage later that year, defeating UFC vet Jamie Moyle. Five months later, the Gilroy, California native kicked off her 2019 campaign by running through the competition in the promotion’s one-night, eight-woman tournament to crown a new strawweight champion, claiming the title by submitting Kailin Curran in the finals. Two months after that, she made the jump to the UFC, stepping in for Cynthia Calvillo opposite former Invicta FC titleholder Livia Renata Souza and walking away with a unanimous decision victory.

The 25-year-old is currently on the outside looking in when it comes to the strawweight rankings, but a second consecutive UFC victory — especially over an established talent like Torres, who is stationed at No. 12 after a long run inside the Top 10 — would certainly catapult Van Buren into the title chase and potentially set her up for an even greater opportunity in the second half of the year.

Just as there are some fighters who have shiny records, but have never really fought anyone, there are others whose records don't look particularly impressive at first blush, but upon closer inspection, show just how talented its owner is. Casey falls in the latter category, as the 33-year-old is only 9-7 as a professional yet stands as an intriguing new addition to the UFC flyweight division.

The former collegiate soccer player went 4-6 in her first 10 Octagon appearances, but the results don't tell the complete picture. All six of those losses came on the scorecards, two by split decision and a couple more feeling like they could have gone the other way as well. From the jump, the Fight Ready representative was sharing the cage with tenured contenders and experienced talents in the strawweight division, and although she wasn't always getting her hand raised, it was always clear that Casey was a legitimate talent.

Earlier this year, she made the move to the flyweight ranks and showed why real heads always knew she was far better than her record suggested, using her slick grappling skills to catch Mara Romero Borella with an armbar off her back three-and-a-half minutes into the opening round. It was a beautiful finish that Casey patiently set up, calmly working through setups until the opportunity to connect on a finish presented itself.

This weekend, she makes a quick return to the cage in a showdown with fellow grappler Gillian Robertson in a pairing that has the potential to further strengthen her case as a threat in her new surroundings. Robertson won four of her first five UFC appearances before running into Maycee Barber last time out, and profiles as someone who should be able to hang with Casey on the ground, which could force the more seasoned divisional sophomore to showcase even more of her arsenal this time around. 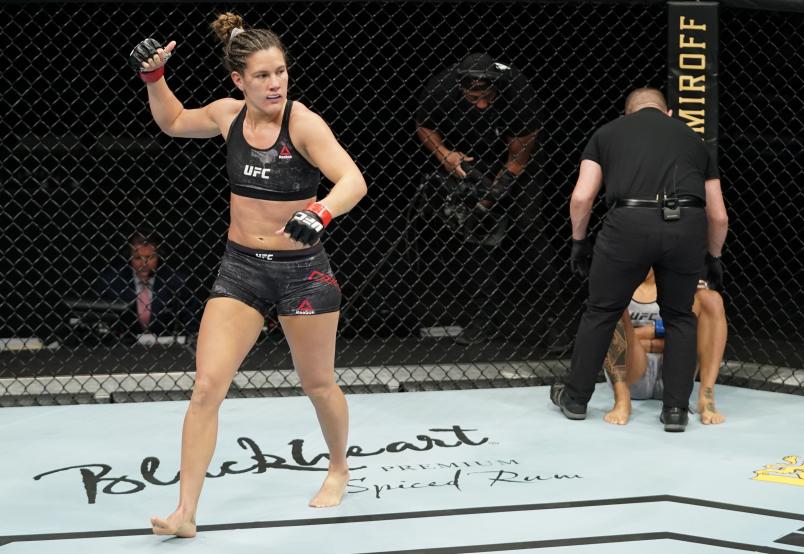 JACKSONVILLE, FLORIDA - MAY 16: Cortney Casey celebrates after her submission victory over Mara Romero Borella of Italy in their strawweight fight during the UFC Fight Night event at VyStar Veterans Memorial Arena on May 16, 2020 in Jacksonville, Florida. (Photo by Cooper Neill/Zuffa LLC via Getty Images)

JACKSONVILLE, FLORIDA - MAY 16: Cortney Casey celebrates after her submission victory over Mara Romero Borella of Italy in their strawweight fight during the UFC Fight Night event at VyStar Veterans Memorial Arena on May 16, 2020 in Jacksonville, Florida.
Tags
Shane Burgos
Cortney Casey