Fighters On The Rise: July 25 Edition

Take a closer look at three fighters poised to emerge ahead of their bouts on July 25's Fight Night
By E. Spencer Kyte, on Twitter @SpencerKyte • Jul. 19, 2020

The UFC’s stay on Fight Island continues this weekend with a loaded fight card that should close out this exciting month in style.

But this is also a card laced with new names and emerging talents, including some of whom have the potential to become contenders in their respective divisions in the next couple of years.

Here is a closer look at three of those athletes.

This is the July 25 edition of On the Rise.

It’s not very often that an undefeated fighter heads into a main card clash with a surging former champion while remaining under the radar, but Rodriguez’ UFC run has been anything but conventional.

The talented Brazilian is 2-0-2 through her first four appearances inside the Octagon, with victories over Jessica Aguilar and Tecia Torres sandwiched between draws in bouts with Randa Markos and Cynthia Calvillo, who came in four pounds over the strawweight limit and has subsequently established herself as a contender at flyweight. Overall, Rodriguez, who earned her UFC contract with a victory on the Contender Series in the summer of 2018 and comes from a Muay Thai background, is 12-0-2 in her mixed martial arts career heading into this weekend’s bout with Carla Esparza.

Gauging where newcomers fit in when they’ve had limited experience or faced non-UFC level competition on the regional circuit is difficult and that was the case with Rodriguez, who pushed her record to 10-0 with her Contender Series win, but had yet to be tested against top flight foes. She’s subsequently answered those questions by going unbeaten in four assignments against quality strawweight veterans, and she can take another big step forward with a victory on Saturday.

The inaugural UFC strawweight champion, Esparza has rebounded from a two-fight skid in 2018 to produce three straight victories, most recently edging out Michelle Waterson at UFC 249 in Jacksonville, Florida. “The Cookie Monster” is a quality grappler with a wealth of experience and constantly improving striking, and her losses have primarily come against elite competition.

While Rodriguez has already cemented her standing as a Top 15 talent in the 115-pound weight class, this is her chance to earn a spot on the short list of contenders as 2020 continues to roll on. 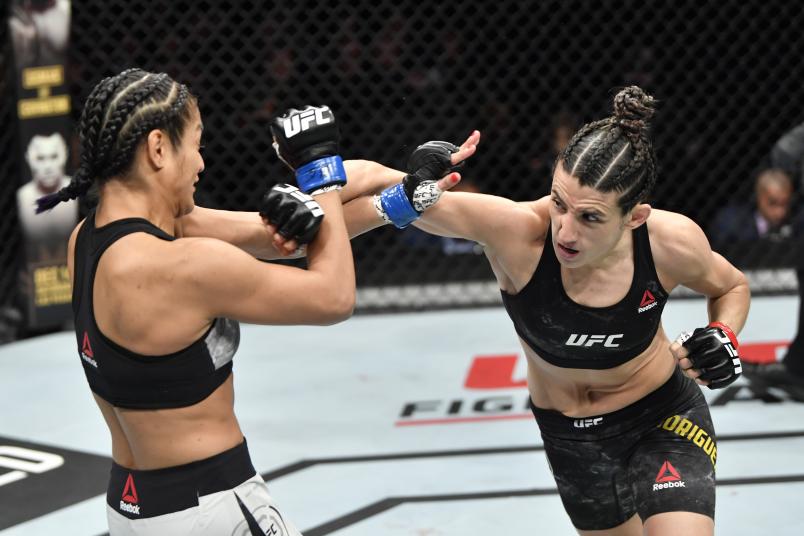 There is long tradition of former Cage Warriors champions transitioning to the UFC and having continued success. Amongst those to have matriculated to the Octagon from the UK promotion are Michael Bisping, Martin Kampmann, Jack Hermansson, Dan Hardy, Molly McCann and some guy named Conor McGregor.

This weekend, Herbert becomes the latest Cage Warriors lightweight champion to make the move to the UFC as he steps in against Francisco Trinaldo in a bout that will immediately help clarify where the 32-year-old veteran stands in the loaded 155-pound weight class.

Sporting a 10-1 record and riding a six-fight winning streak, Herbert has been lights out over his last four fights, stopping Joe McColgan and Steve O’Keefe in the first round to earn a championship opportunity before putting away Jack Grant in the third to claim the title and then defeat UFC alum Cain Carrizosa a little more than three minutes into his first title defense. After originally being paired with fellow Brit Marc Diakiese for the scrapped London card in March, Herbert now gets the opportunity to share the cage with one of the division’s most seasoned inhabitants.

Trinaldo turns 42 at the end of next month and is in his ninth year on the UFC roster, having amassed a 15-6 record during that time. He is a perennially tough out who has shared the cage with prospects, contenders, and divisional stalwarts alike and is the perfect litmus test for someone like Herbert as he steps into the Octagon for the first time.

While the lightweight division is always flush with talent and climbing the competitive ladder is more difficult than in any other weight class, this is a terrific starting point for the UFC newcomer. Beating Trinaldo would establish Herbert and put him in a position for another name-brand assignment next time out.

Evloev’s rise up the featherweight ranks since transitioning to the UFC following a championship run under the M-1 Challenge banner has been slowed by injuries. However, the talented 26-year-old heads into this weekend’s matchup with Mike Grundy with an unblemished record through his first dozen fights and a diverse skill set that could carry him into contention in the not too distant future. 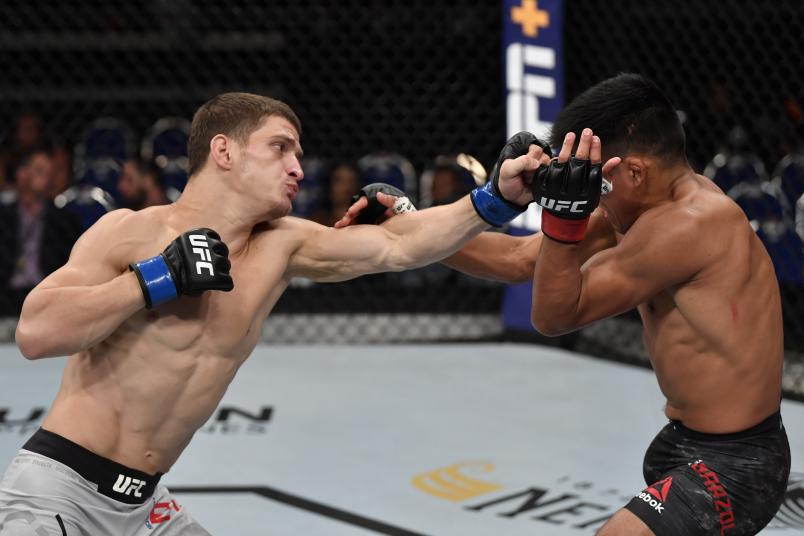 The unbeaten prospect won and defended the interim featherweight title in M-1 before unifying the belts and successfully defending the undisputed title once prior to decamping for the UFC. He made two starts during his rookie campaign on the roster, winning both by unanimous decision, and was forced out of his sophomore debut earlier this year following a motorcycle accident.

Saturday night, Evloev takes on Mike Grundy in a bout that was originally booked last summer and should serve to further illuminate where the talented Russian fits within the deep and competitive 145-pound ranks.

A teammate of headliner Darren Till, Grundy is 12-1 in his career and was an accomplished international wrestler before transitioning over to mixed martial arts. He won his promotional debut by TKO in March 2019 to push his winning streak to nine and is the kind of battle-tested veteran who should be able to push the promising Russian this weekend.

The featherweight ranks are loaded with young, emerging talent at the moment, which makes a fight like this crucial for Evloev if he wants to continue making progress up the divisional ladder. A third consecutive triumph inside the Octagon while pushing his record to 13-0 overall could unlock an even greater opportunity down the stretch this year, and potentially put him in a position to make a run towards title contention in 2021.