Fighters On The Rise: July 18 Edition

Take a closer look at three fighters poised to emerge ahead of their bouts on July 18's Fight Night
By E. Spencer Kyte, on Twitter @SpencerKyte • Jul. 13, 2020

The third UFC fight card in an eight-day span on Fight Island brings the fourth championship bout, as Deiveson Figueiredo and Joseph Benavidez run it back with the flyweight title hanging in the balance.

Before the duo that did battle in Norfolk, Virginia earlier this year renew acquaintances, a pack of intriguing matchups featuring a collection of intriguing talents that have quietly been working their way towards contention in their respective divisions will hit the Octagon, including one fighter who could very well be a future opponent to whomever emerges from the main event with gold around their waist.

While there have been a number of crucial divisional battles that have already taken place on Yas Island with more on tap over these next two fight cards, this month-long stretch of events also provides an introduction to a number of up-and-coming competitors to play closer attention to going forward, with this week’s trio at the vanguard of that group.

Here’s a closer look at those fighters.

This is the July 18 edition of On the Rise. 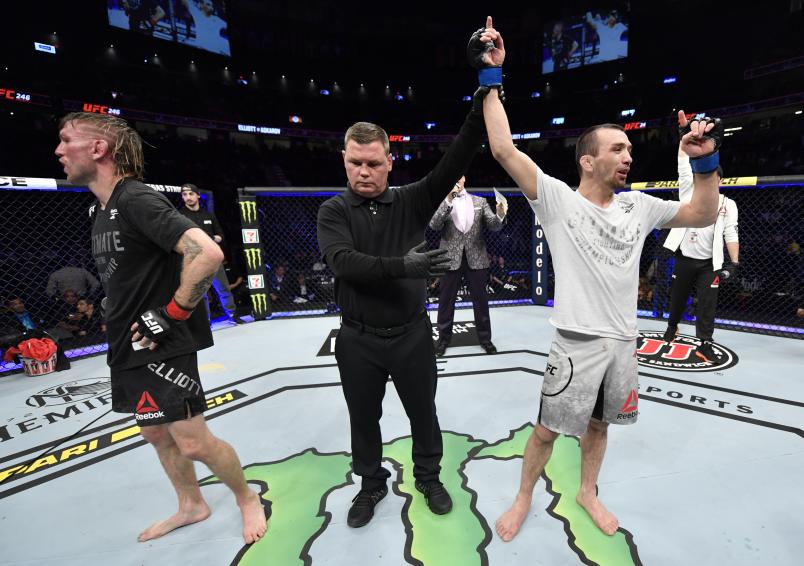 LAS VEGAS, NEVADA - JANUARY 18: Askar Askarov of Russia reacts to the decision against Tim Elliot in their flyweight fight during the UFC 246 event at T-Mobile Arena on January 18, 2020 in Las Vegas, Nevada. (Photo by Jeff Bottari/Zuffa LLC via Getty Images)

LAS VEGAS, NEVADA - JANUARY 18: Askar Askarov of Russia reacts to the decision against Tim Elliot in their flyweight fight during the UFC 246 event at T-Mobile Arena on January 18, 2020 in Las Vegas, Nevada. (Photo by Jeff Bottari/Zuffa LLC via Getty Imag
Askar Askarov

While Figueiredo and Benavidez battle for the flyweight throne, Askarov is slated to square off with Brazilian Alexandre Pantoja in a matchup of ranked fighters on the cusp of title contention in the 125-pound weight class.

Undefeated as a pro, the 26-year-old Askarov picked up his first UFC victory last time out, registering a unanimous decision victory over former title challenger Tim Elliott. The Russian prospect, who battled Brandon Moreno to a draw in his promotional debut last September, smacked Elliott with a right hand two minutes into the opening round that appeared to leave the veteran out on his feet, and while he wasn’t able to secure a finish, Askarov dominated the remainder of the fight.

If Askarov can push his unbeaten run to a baker’s dozen on Saturday night by beating the savvy and seasoned Pantoja, who has won four of his last five in the Octagon and is 22-4 overall, he will establish himself as a Top 5 fighter in the division and put him on the short list of potential title challengers for the new champion alongside Moreno and Alex Perez.

Everybody that has passionately followed stick and ball sports at one time or another can remember a player from their favorite team who had all the markings of a potential superstar, but constantly struggled to put it all together.

That’s the best way I can describe Dawson’s first three years on the UFC roster.

The 26-year-old secured a contract with a victory on Season 1 of the Contender Series, spent 19 months on the sidelines as a result of an anti-doping violation where he was later cleared of any wrongdoing, and then won two fights in 10 weeks, beating Julian Erosa and Mike Trizano to push his record to 14-1. He ran his UFC record to 3-0 back in February with a second-round submission win over Darrick Minner, but the dominant effort was somewhat diminished by the fact that Dawson missed weight by two-and-a-half pounds ahead of the contest.

Dawson has looked dominant in each of his first three appearances and works with a great crew at Glory MMA & Fitness who have the know-how and experience to help him maximize his potential; he just needs get through a couple bouts without any miscues.

This weekend, he squares off with Nad Narimani in a catchweight bout that should provide another opportunity for him to showcase the skills that make him one of the top young fighters on the UFC roster. The British veteran has good grappling skills of his own and has faced a high level of competition throughout his career, so he should serve as a stern test for the promising Contender Series alum.

Things didn’t always click for those potential superstars everyone remembers, but when it did, the change was immediate and undeniable.

Dawson has that kind of potential, but will it click?

If you’re looking for an unranked fighter who could find his way into the Top 5 at bantamweight within the next 18 months, Johns would be a pretty solid selection.

The Welsh standout won his first three UFC appearances to push his record to 15-0, then lost back-to-back contests to current No. 2 contender Aljamain Sterling and divisional stalwart Pedro Munhoz before suffering a knee injury that sidelined him for the entirety of 2019. He returned earlier this year with a victory over Contender Series alum and regional standout Tony Gravely, and now he gets the opportunity to pick up a second consecutive victory this weekend in a second consecutive pairing with a graduate of the Contender Series as he squares off with Milwaukee-based prospect Montel Jackson. “Quik’ has won three straight since losing his promotional debut to Ricky Simon and is himself one of the best up-and-comers in the 135-pound ranks, which means this should be an electric affair from start to finish.

Johns won gold in both Cage Warriors and Titan FC before arriving in the UFC, and those twin setbacks against Sterling and Munhoz should be viewed as opportunities to learn and improve more than anything else. He was ranked ahead of his injury and is very much capable of stringing together a couple more victories and returning to the Top 15 before the year is out.