Fighters On The Rise: January 16 Edition

After a year that was unforgettable in so many ways, it’s time to dive right into the 2021 event calendar with a return to Fight Island and a trio of events set to kick off the year in style.

Over the next two weeks, three events featuring a host of critical matchups in some of the most talent-rich divisions will hit the Octagon, setting an early course for how the championship races in those weight classes will run over the next 12 months. Featuring a collection of former champions, current contenders, a high-profile new arrival, and tons of emerging names with the potential to make waves in the year ahead, this three-event stretch is old school NBC Thursday night viewing: Must See TV.

As we’ve done for the last several years, we’ll kick off Fight Week coverage with a look at three fighters scheduled to step into the Octagon that you absolutely should be paying attention to heading into each event and going forward.

Whether they’re “under the radar” rising threats, competitors in the early stages of their UFC careers with an abundance of upside, or recent additions to the roster that can’t be overlooked, this series will continue to afford you an introduction to these men and women and give you a chance to grab a seat on the bandwagon before it reaches capacity.

Here are the three fighters you should be watching closely on Saturday.

This is the January 16 edition of On the Rise.

Just because he was one of the top newcomers of 2020 doesn’t mean I’m going to stop altering people to the talent and potential of the 26-year-old Buckley.

By now, everyone has seen the video game-inspired, Knockout of the Year “New Mansa” delivered in his sophomore appearance in the Octagon against Impa Kasanganay in October. It was one of the most spontaneous and splendid offensive attacks we’ve seen in the UFC cage in a number of years and it deserved all the accolades and attention it received, but what some might have missed is what happened on either side of that superb finish.

In August, Buckley made his debut, returning to action just eight days after scoring a second-round knockout win over Jackie Gosh at LFA 87 to take on Kevin Holland, who was coming off a first-round stoppage win in May, on short notice in Las Vegas. It didn’t go his way, but there were a number of positive takeaways and lessons to be learned from spending more than 10 minutes in the cage with a fighter who is now on the fast track to contention in the middleweight division.

Then a month after blasting Kasanganay, Buckley hustled back into the Octagon and took on Jordan Wright, hurting the previously unbeaten Contender Series alum late in the first round before dispatching him with a combination of hooks early in the second, collecting a second consecutive Performance of the Night bonus for his efforts.

Now the new father returns to the scene of his blistering viral knockout to square off with Italy’s Alessio Di Chirico in a main card matchup this weekend.

If last year put Buckley on the map, this year could be the one where the promising upstart establishes himself as a Top 15 fighter in the 185-pound ranks. He built a ton of momentum for himself over his final two fights of 2020 and if he’s able to maintain it through this weekend and beyond, Buckley will show that he’s a serious player in the middleweight division. 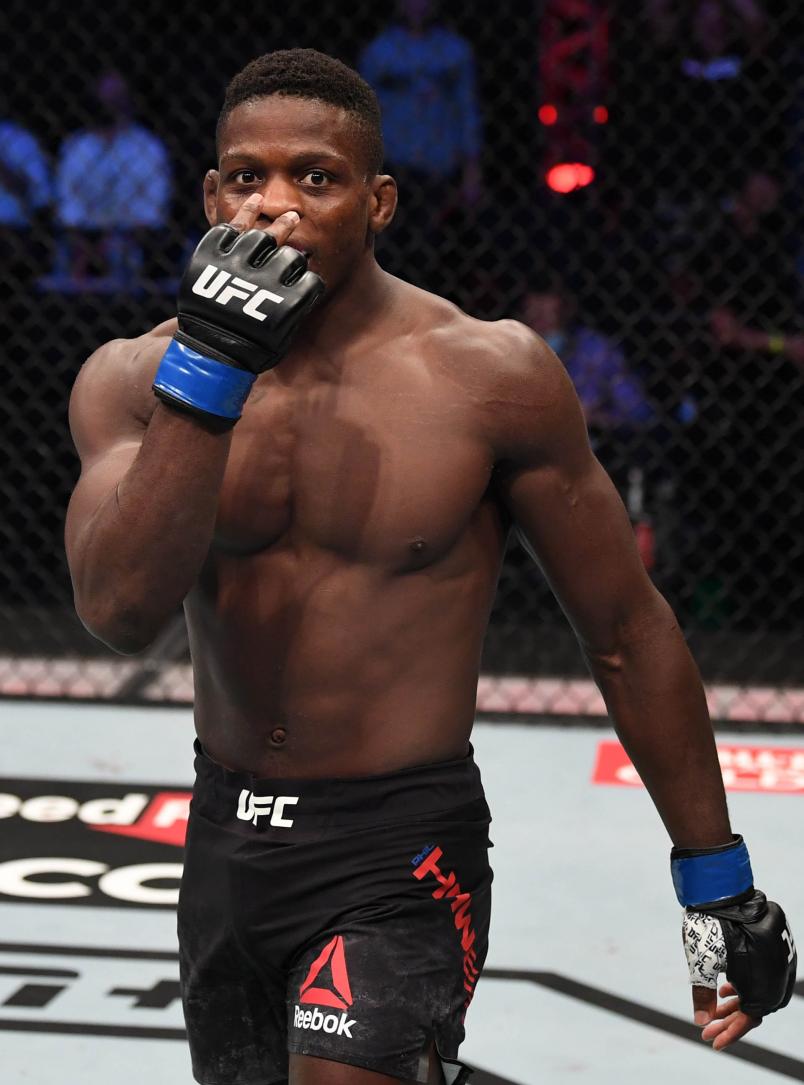 While Buckley had the unquestioned top knockout of 2020, one of the other finishes that was on my Top 10 for the year was Hawes’ demolition of Jacob Malkoun.

In a mere 18 seconds, the 32-year-old UFC freshman showed why so many people — myself very much included — were looking forward to his debut and had been so enamored with his potential earlier in this career. The first punch that Hawes landed made Malkoun drop to a knee and from there he swarmed, with three swift punches along the fence finding a home and bringing the bout to a sudden halt.

There wasn’t even time for the broadcast crew to set things up; Jon Anik went from reminding everyone that the fight clock was brought to you by Toyo Tires to declaring the fight was over, with Daniel Cormier offering a chorus of “Oohs and Aahs” in harmony.

To borrow a phrase from salty old sports journalists, Hawes “looks good getting off the bus” — he stands six-feet even with thighs like tree trunks and a chiseled physique. He has solid wrestling fundamentals, better quickness and speed than a man of his size should rightfully exhibit, and considerable power. His is now, as he was when he first arrived on the scene back in 2014, a tremendous impressive physical presence.

But what was missing then is what makes Hawes such an intriguing figure to track in the middleweight ranks this year: experience.

Over the last several years, the promising talent, who trains with the Sanford MMA crew and spent some time in Switzerland training alongside former teammate Volkan Oezdemir ahead of this fight, has logged considerable time in the gym and a handful of fights, building up his knowledge base and his level of comfort in the cage to where he now knows how to best put his obvious and abundant skills to use.

This weekend represents a strong test for Hawes, as he steps in with fellow 9-2 UFC sophomore Nassourdine Imavov, who registered a unanimous decision win over Jordan Williams in his promotional debut. The 24-year-old Russian-born fighter trains under Fernand Lopez at The MMA Factory in Paris and has serious upside of his own, entering the Octagon this weekend on a six-fight winning streak and a 9-1 record with seven finishes since losing his professional debut.

Should Hawes successfully navigate this weekend’s matchup with Imavov to push his winning streak to six and earn a second straight UFC win, it wouldn’t be surprising to see the former highly touted prospect earn a chance to make a rapid ascent in the middleweight division. 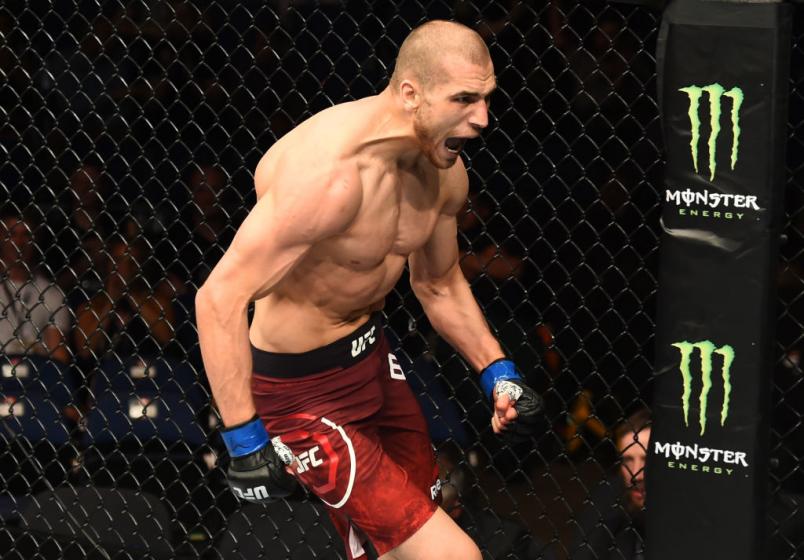 Tom Breese of England celebrates his victory over Daniel Kelly of Australia in their middleweight bout during the UFC Fight Night event at ECHO Arena on May 27, 2018 in Liverpool, England. (Photo by Josh Hedges/Zuffa LLC)

We round out this week’s all-middleweight edition of On the Rise with a return appearance from Breese, who makes his third start after a nearly two-year layoff in a clash with veteran grinder Omari Akhmedov.

The Birmingham native debuted in the UFC in 2015, carrying an unbeaten record and tons of hype with him into the Octagon. He responded with three straight victories, pushing his record to 10-0 before landing on the wrong side of the cards against fellow upstart Sean Strickland.

A series of injuries sidelined him for a tick under two years, until he returned to middleweight and the win column with a first-round stoppage win over Daniel Kelly. Further health concerns led to another extended hiatus and this time, his return didn’t go so well, as he was stopped by Brendan Allen in the first round last February.

But for the first time since 2016, Breese returned to action later in the year, showcasing the slick boxing that serves as a wonderful compliment to his suffocating and smothering ground game against KB Bhullar. Less than two minutes into the opening round, Breese put the Canadian newcomer on the deck with a sharp jab, swarming with follow-ups to get the finish and get him back on the radar in the 185-pound weight class.

RELATED: Tom Breese Eyes A Run To The Top

If his performance against Bhullar was a partial reminder of what Breese brings to the table, this weekend’s showdown with Akhmedov is an opportunity to put his full arsenal on display and take a massive step forward in the talent-stacked division.

A veteran of 13 UFC appearances, Akhmedov had his six-fight unbeaten streak snapped in the summer by former champion Chris Weidman. Prior to that, the 33-year-old has posted wins over Zak Cummings and Ian Heinisch, while battling current streaking contender Marvin Vettori to a draw.

With his various injuries and health concerns behind him and the momentum garnered from his brilliant performance against Bhullar, Breese enters this weekend’s bout with Akhmedov looking to secure the biggest victory of his career and elevate himself into position to make a push for a place in the Top 15 or higher as the year progresses.