If you haven’t already, be sure to mark your calendar for October 30, 2021, as UFC 267: Blachowicz vs Teixeira takes center stage during Abu Dhabi Showdown Week — and don’t just pencil it in, either.

This stacked card, airing under special broadcast circumstances for viewers in the United States, features a six-fight main card with two title fights and an additional nine bouts on the preliminary card.

How To Watch UFC 267 — ESPN+ Special Presentation From Abu Dhabi

On top of the fully-loaded fight card, four athletes will be making the walk to the Octagon for the third time in 2021, joining a short list of the most active fighters so far this year, with three fights completed.

By now, Islam Makhachev is probably a name you’ve heard once or twice this year. After an entire year filled with fights falling off for various reasons in 2020, Makhachev made his highly anticipated return to the Octagon on March 6, 2021 at UFC 259: Blachowicz vs Adesanya, facing Drew Dober. After dominating for two full rounds, Mahkachev locked up a third-round submission via arm triangle with just under three-and-a-half minutes to go in the fight.

Four months later, Makhachev returned to Las Vegas to take part in his first UFC main event bout, taking on Brazil’s Thiago Moisés. The Russian advanced his record to 20-1 after a fourth-round submission via rear-naked choke. In his Octagon interview following the fight, the combat sambo world champion called out essentially the entire lightweight division for shying away from the challenge he brings from bell to bell.

Makhachev’s desires were fulfilled — kind of — when the previously scheduled bout against former UFC lightweight champion Rafael Dos Anjos from October 2020 was rescheduled for a year later at UFC 267. Dos Anjos was forced to pull out from the bout due to an injury sustained during camp, but the spot was filled almost immediately by New Zealand’s Dan Hooker. 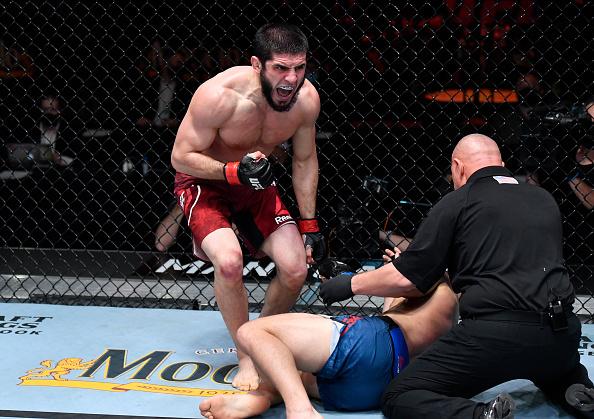 While it’s not the name Makhachev had in mind on his list of names to call out, he’s finally gotten the chance to fight someone within close proximity in the rankings (and an upgrade from the 8th-ranked Dos Anjos), as the number 5-ranked Makhachev will take on the 6th ranked lightweight in “The Hangman.” Makhachev will be looking for his third victory in 2021 and ninth-consecutive win as he continues on the quest for making the case that he is the next in line for a lightweight title fight.

Standing opposite Makhachev will be sixth-ranked lightweight Dan Hooker — a fight we can likely all say we didn’t exactly see coming, but we’re not surprised by.

Hooker has had quite the year so far; it’s honestly a miracle in itself that he’s been able to compete at all due to the heavy travel restrictions imposed in New Zealand and Australia. Despite the odds, 2021 will become his most active year since 2018 when “The Hangman” enters the Octagon in Abu Dhabi once again for his third fight of the year.

For Hooker, 2021 began with a broken heart when he was unable to spoil the UFC debut of Michael Chandler in a bout to help determine who would fight for the vacant UFC lightweight belt. Chandler earned his shot at lightweight gold after defeating Hooker via TKO (punches) at 2:30 of the first round at UFC 257: Poirier vs McGregor 2 on January 24th.

Hooker returned to the Octagon on September 25th at UFC 266: Volkanovski vs Ortega after, to use his own words, forcing his way onto the card. Armed with a voucher to get back into his country and the desire to stay active and set the record straight, Hooker and Nasrat Haqparast were all set to square off on the preliminary card… and then life happened.

And we are in with a shot....they have granted me an appointment Monday. All goes well and I get my passport back, I can jump on the only flight out of NZ Thursday night.

Both Hooker and Haqparast ran into travel issues when it came to leaving their respective countries, extending through fight week all the way until Thursday. In a saga that kept literally everyone on the edge of their seats, both lightweights arrived in the United States in time and on weight, both weighing in Friday morning in Las Vegas under the lightweight limit. Hooker defeated Haqparast after three rounds by unanimous decision, breaking his two-fight skid.

The New Zealander will make it three times in the Octagon in 2021 — twice in 35 days — when he steps in for the injured Rafael Dos Anjos to face surging lightweight contender Islam Makhachev.

When Cory Sandhagen scored a jaw-dropping flying knee knockout over former UFC lightweight champion Frankie Edgar in February, it became exceedingly clear that he was a top contender for UFC bantamweight gold. His Performance of the Night victory at UFC Fight Night: Overeem vs Volkov on February 6 was talked about nonstop — almost as much as his comments about former UFC bantamweight champion TJ Dillashaw’s return.

Originally scheduled to face each the former champion in his first fight back from a two-year USADA suspension in May, the fight was rescheduled as the main event on the July 24 UFC Fight Night after Dillashaw was injured due to a cut suffered in camp. “The Sandman” put forth an applaudable performance, ultimately losing an extremely close five-round split decision. 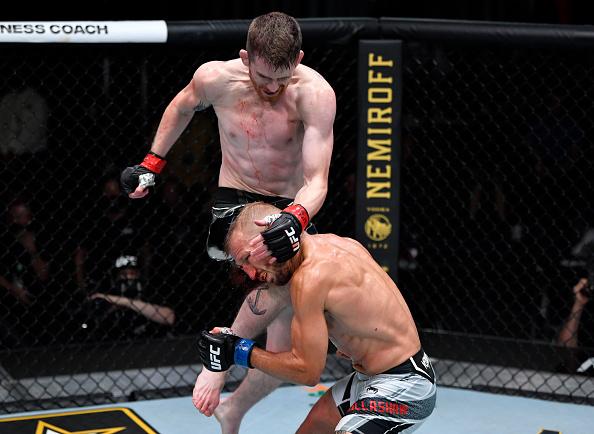 The 29-year-old returns to Abu Dhabi a little more than a year after his stunning second-round spinning wheel kick and punches TKO over Marlon Moraes — another bonus-worthy knockout — in the main event on October 10, 2021. He’ll be fighting his third-consecutive bout scheduled for five rounds, but this time for a shot at interim bantamweight gold. Replacing an injured Aljamain Sterling to take on former bantamweight champion Petr Yan, Sandhagen has the chance to become the second interim UFC champion this year.

Last on our list of three-peat athletes competing at UFC 267 is Alexander Volkov. Another fighter looking to push the needle on his record for the year back toward the win column, Volkov also returns to Abu Dhabi for the second time in his career, almost exactly a year following his second-round TKO over Walt Harris on October 24, 2020. 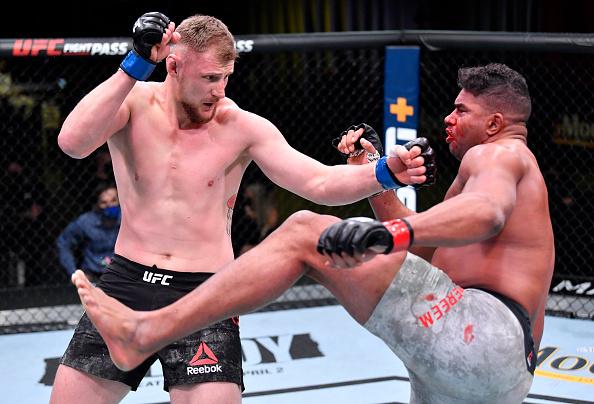 Volkov was off to a strong start to start 2021 after his second-round TKO victory over Alistair Overeem in the main event of UFC Fight Night on February 6, 2021. Despite his Performance of the Night victory, his momentum was halted four months later after a five-round unanimous decision loss to now-interim UFC heavyweight champion Ciryl Gane.

On October 30, Volkov will enter the Octagon against Marcin Tybura for just his second fight not scheduled for five rounds in nearly sixteen months, marking the most active year in his career since 2016.