Daniel Cormier has had one of the most legendary decades in MMA history
By Walker Van Wey • Dec. 18, 2019

After fighting a who’s who of two divisions, earning double champ status and five performance bonuses and engaging in two of the biggest rivalries in UFC history, Daniel Cormier has had one of the most legendary decades in MMA history and it looks like we may still get one more chance to appreciate him.

But before we look to the future, let’s take a moment to make note of how the two-time member of the United States Olympic wrestling team became one of the most decorated fighters the UFC has ever seen. 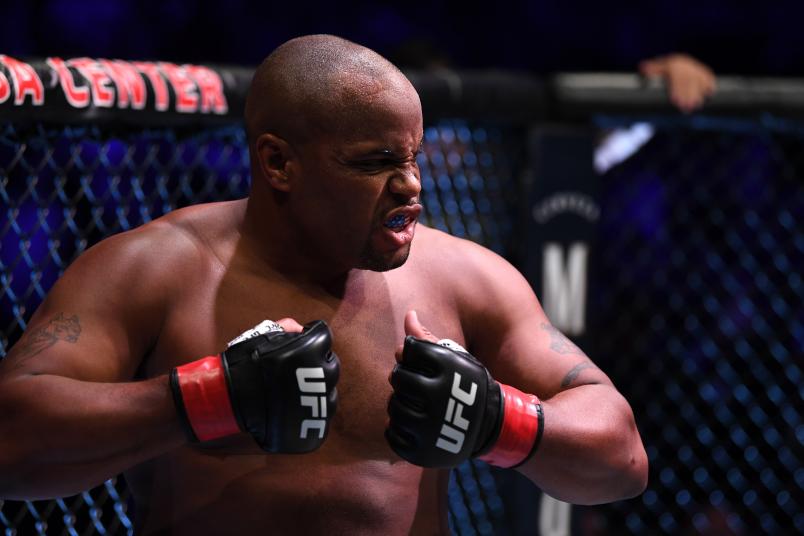 Strikeforce was one of the few competitors to the UFC in the late 2000s. It wasn’t the run-of-the-mill second-rate promotion that pushed a couple fighters through to the UFC. And when Zuffa purchased Strikeforce, the blink of an eye was all it took for numerous UFC title fights to feature the words “former Strikeforce champion” on one side of the marquee.

So to master the talent of Strikeforce, it would take a dedicated, decorated athlete of the highest caliber.

Daniel Cormier made his debut in Strikeforce in a mid-card heavyweight showdown against Gary Frazier. At 30 years old already, Cormier brought a few questions to the cage with him. The biggest seemed to be, was he willing to wait a couple years to climb the rankings when his debut was in the middle of most fighters’ prime?

Cormier answered all questions immediately. His MMA journey began with the late 2009 victory over Frazier and carried into 2010 with seven more Strikeforce victories.

At 8-0 in Strikeforce, Daniel Cormier snuck up on everybody’s radar as one of the biggest threats to heavyweights worldwide. He shined the brightest during the Strikeforce Heavyweight Grand Prix.

On five days’ notice, Cormier silenced his own reservations about entering the Grand Prix. Pitted against Bigfoot Silva, Cormier upset the 6’4” heavyweight with a first round KO that cost him his right hand. Moving on to the finals, Cormier battered former UFC heavyweight champion Josh Barnett to take the Grand Prix title.

Just two years into his MMA career, he was already too dominant for fights to be interesting. 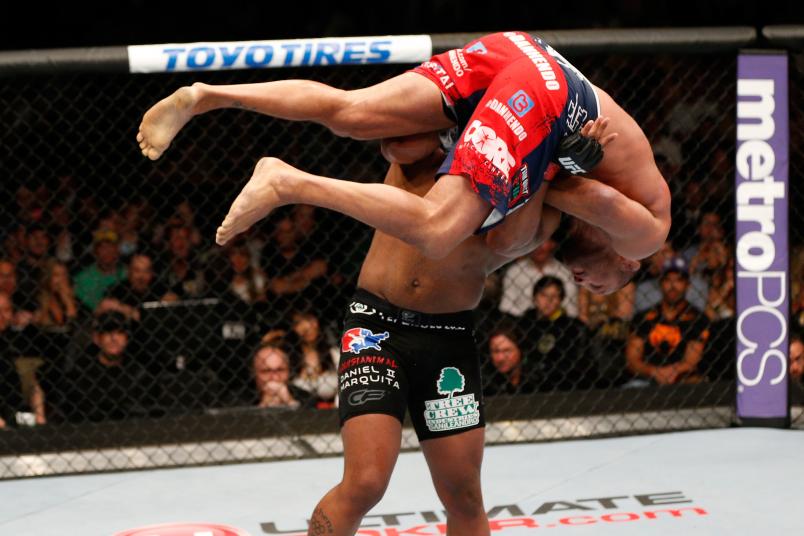 All 22 of Cormier’s wins read like a list of MMA standouts. Bigfoot Silva, Josh Barnett, Frank Mir, Roy Nelson, Dan Henderson, Rumble Johnson, Alexander Gustafsson, Anderson Silva, Stipe Miocic, Derrick Lewis. Apologies for the list but for one reason or another, Cormier has made a career of fighting only household names, and with losses to only Jon Jones and Stipe Miocic, he has secured his place as one of the greatest of all-time.

Cormier’s career achievements opened up drastically when he stepped down to light heavyweight out of courtesy to teammate Cain Velasquez.

The step down made weight cuts difficult but it opened up a world of competition that has made it impossible to argue against his credentials. Instead of staying at heavyweight and likely clearing out the division, the step down opened up the greatest fights and rivalries in MMA history.

When Daniel Cormier locked horns with Jon Jones it was one of the biggest spectacles the sport had ever seen. The two were polar opposites in nearly every way. Cormier showed up to press conferences in suits and ties, Jones sported athletic apparel. Jones was known for a striking game with high volume and spinning attacks, Cormier was a wrestler. Even the builds were completely different. The one thing that bound them together was their dislike for one another.

Both men had blemish-free records until they clashed for the first time at UFC 182. The two would become so heated, so fast, that every interview, every press conference, every face off became must see TV.

When they finally met, DC finally found his match but he still gave Jones one of the toughest dogfights he had ever seen.

Beyond Jones, Cormier has had a memorable pair of fights with Anthony “Rumble” Johnson and a split series with Stipe Miocic, who he hopes to meet again in 2020. 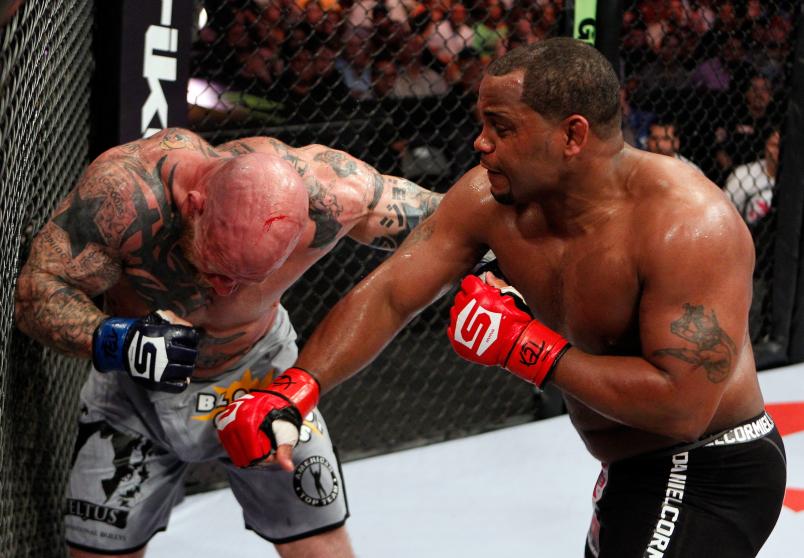 Tired of hearing about champ-champs yet? We aren’t either.

Cormier accomplished the unthinkable in 2015 when he bested “Rumble” Johnson at UFC 187 to finally hoist UFC gold. After three title defenses at 205 pounds, Cormier stepped up to spice up the heavyweight division for the first time in five years.

As prestigious as the UFC heavyweight title is, heavyweights weren’t exactly jumping to take on Miocic, so when DC expressed interest in a return to heavyweight, the UFC happily accepted and the super fight was on.

Just inside the first round, Cormier shocked the world with a KO victory over Miocic, making him only the second double champ in UFC history.

Refusing to settle at “champ-champ” status, Cormier made even more UFC history when he breezed past heavyweight knockout artist, Derrick Lewis, at UFC 230 becoming the first fighter to ever defend both titles. 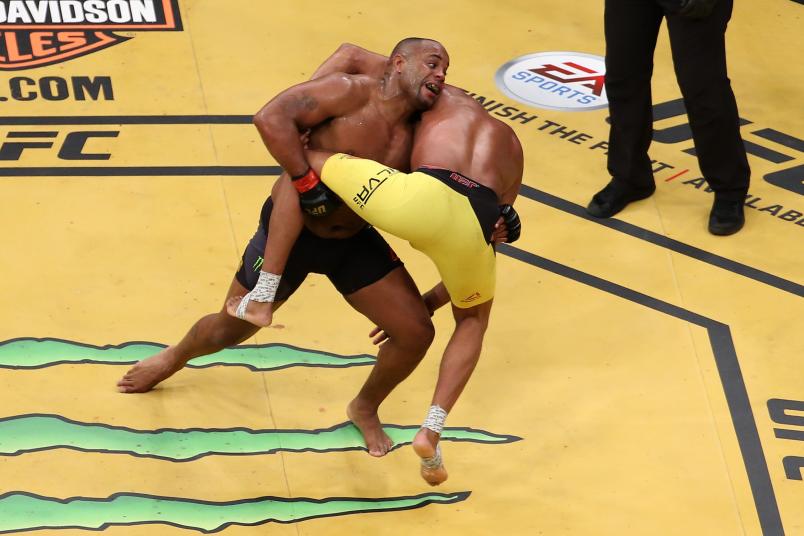 It’s been over 15 years since Cormier competed at the 2004 Summer Olympics, but the principles that went into making an athlete the captain of the United States squad in 2008 never left him.

Hard work, respect and integrity have coursed through the veins of DC through the thickest of patches of his MMA career.

Through the entire duration of being one of the most “boo-ed” fighters in the UFC, the most Cormier ever snapped at the crowd was, “Boo me, yes. That makes a lot of sense.”

Cormier appears to not have the breaking point that most fighters would have reached years ago. For new fans trying to imagine what Cormier was like midway through his UFC career, picture the same DC you see now. A smile, professionalism, respect for his opponent and an unrelenting dedication to the sport. And night in and night out, Cormier continued to win and do it his way.

It’s possible we’ll see other fighters with a record similar to Cormier’s. There will be another rivalry that will come close to eclipsing Jones-DC and there will definitely be other double champs, but Cormier’s story is impossible to duplicate.

He started his career when most men are on their ascension to the top, he is the top dog at one of the most successful MMA gyms on Earth and you’d never know it, he has made it to the top of the mountain without a catch phrase or embarrassing moment.

Daniel Cormier has been almost flawless in and out of the Octagon making him a clear candidate for Fighter of the Decade.