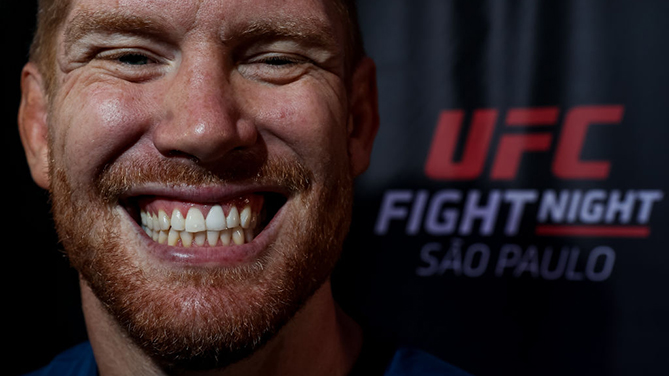 Sam Alvey has become known for his wide, toothy smile, and heading into this weekend’s UFC return to Sao Paulo, the 32-year-old veteran has plenty of reasons to show off his pearly whites.

After a 2-0 start to his time competing at light heavyweight, Alvey got the call to venture to Brazil’s most populous city to take on one of the nation’s legendary fighting figures, Antonio Rogerio Nogueira, this weekend at Ginasio do Ibirapuera.

“It’s the same thing any time a fight comes across my desk: I say, ‘Yes, I’ll take it,’” says Alvey, who followed up his first-round knockout win over Marcin Prachnio with a hard-fought split decision victory over Gian Villante in his sophomore appearance in the 205-pound ranks. “Then I get to think about where it is and I say, ‘Oh, it’s in Brazil; that’s even better.’ After I accept, after I find out where, then it’s, ‘Okay – I know this guy. This is a legend. He fought Dan Henderson before I was fighting at all.’

“He’s beaten the best and been competing at the top of the game since the beginning of his career and I get to share an Octagon with him and I’m pretty excited about that.”

Alongside his twin brother Antonio Rodrigo Nogueira, Mauricio “Shogun” Rua and Wanderlei Silva, “Little Nog” emerged as one of the biggest Brazilian stars in the sport and one of the top light heavyweights in the world while competing under the PRIDE FC banner. That standing was cemented when he submitted Henderson in the opening round of the 2005 PRIDE Middleweight Grand Prix and carried over through to his arrival in the Octagon in November 2009.

Despite being limited by injuries and the looming presence of Father Time standing over his shoulder, Nogueira remains an iconic figure in his native Brazil, and being the man to oppose him as he returns to the cage for the first time in nearly two years will likely result in the affable and positive Team Quest product being showered with a chorus of boos and “Uh Vai Morrer!” chants during his walk to the cage and throughout the fight.

But for Alvey, that’s part of the allure of competing all over the world.

“I love experiencing cultures and I love being booed and cheered,” says Alvey, who has gone 12-4 in his career competing outside of the United States, logging more “road games” than “home games” over his last 24 appearances. “I love making fans in different languages. I get a kick out of this whole fighting game.

“I listen to some of my younger pros and it’s, ‘I’m only making a thousand dollars,’ and it’s like, ‘I was 12-1 before I made a thousand dollars.’ I think my first dozen fights were for $250 and gas money, but what I did get to do was travel. I got to go to Trinidad, I went to New Zealand, and I went all over the Midwest and Southeast. I got to see stuff that most people don’t get to see and that was kind of the payoff. Instead of money, I got experiences.

“Now I fight with the UFC and they’re taking care of me and I get to do both now,” he adds. “I grew up in my fighting career seeing places and making no money. Now I’m making some money and I still get to see places. To imagine that someone flew me and my family to Brazil so that I can fight – and they’re going to pay me to do it – is surreal to me.”

While getting paid to pack his bags and sling hands around the globe for money remains somewhat unbelievable to Alvey; the fact that he’s continuing to improve and showing growth as a fighter more than 40 bouts into his career is not.

The Wisconsin-raised, California-based fighter, who laughed at himself as he dropped a thick “You know” at the beginning of an answer in true Wisconsin fashion, credits his ongoing work with Team Quest not only for his immediate success upon arriving in the light heavyweight ranks, but also for giving him reason to believe that at age 32 and with 45 professional appearances already under his belt, he’s still just getting started.

“My training keeps getting better, I work with some of the best coaches in the business with Team Quest and I get to hang out with Dan Henderson all the time, so some of his greatness is bound to rub off on me,” laughs Alvey, only half joking.

“I’m still hoping that I’m on the first half of my career. I’m hoping I can fight another 14, 15 years. I would love to get (to 100 fights). I don’t know if that will ever happen – that’s a lot of fights from now – but right now, I’ve got (close to 50) fights and I don’t see myself ever slowing down or at least not stopping; maybe slowing down a little bit, but not stopping.

And while he knows he’s venturing into hostile territory as the man opposing a Brazilian legend, Alvey is confident that he and Nogueira will combine to give the fans the type of fight that will have them on their feet by the time the final bell sounds.

“I think this could be a fun fight. I do think that it could be a slow first round, but the second and third rounds are going to be fantastic.

“As soon as he and I get each other’s timing and range, we’re going to have a lot of fun. I’m going to do the best I can to figure out that range and that distance in the first round, but we’ll see. Definitely by round two and round three, we’re going to be putting on a fight for the fans.”

And, as always, Alvey will be smiling the entire time.