Fight week primer: Everything you need to know

After years of buildup to the first UFC fight card in the state of New York, the time is now – and it’s going to be a BIG one.

UFC 205: Alvarez vs McGregor is this Saturday, Nov. 12 at Madison Square Garden. Not only are there 13 exciting clashes on fight night, but there are plenty of activities throughout New York City this week to satisfy all your UFC needs.

Whether you are in New York City for the festivities or following from elsewhere around the world, you won’t want to miss a second of the action, and we are here to help. Here is a breakdown of each day of action this week, telling you when and where to attend, where to watch, what to look for and more. As always, we’ll have everything covered here at UFC.com, so check back throughout the week for all the coverage.
More on UFC 205: Fight card for Nov. 12 | Reasons to watch  | Champions Alvarez, McGregor to headline historic card | Woodley-Wonderboy welterweight title clash set | Polish stars Jedrzejczyk, Kowalkiewicz perfect for NYC | Preview the main card, and the prelims | By the Numbers: UFC 205 has big non-title fights too | Limited seats available

And regardless of whether you are in New York City, you can join the conversation on Twitter using the special hashtags 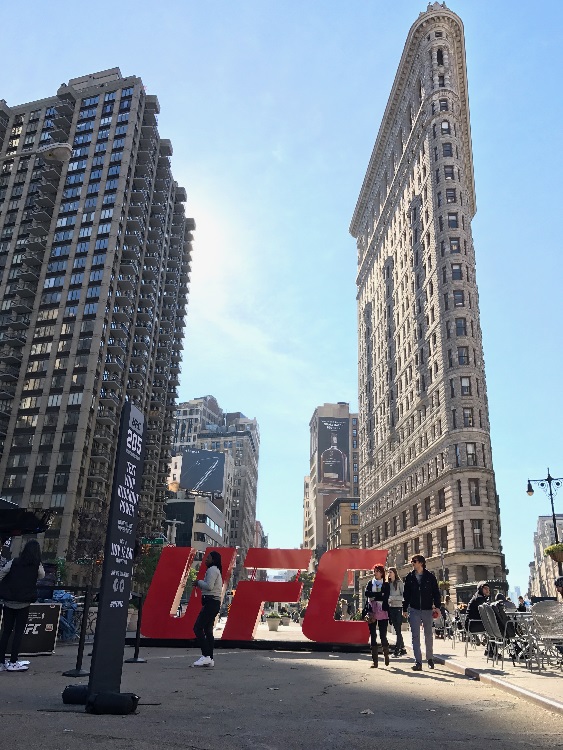 #UFCNYC and #UFC205 to unlock our special emojis.

Tuesday, November 8
• Take a picture with the UFC letters found at Pier 84, the Reebok 5th Ave. location (10 am – 8 pm) and at JFK Airport, Terminal 4 (Delta terminal)
• Tune in to ESPN throughout the day as Eddie Alvarez, Tyron Woodley, Stephen Thompson and Dana White make appearances on various shows

Action starts to pick up on Wednesday as the six fighters involved in title fights (Eddie Alvarez, Conor McGregor, Tyron Woodley, Stephen Thompson, Joanna Jedrzejczyk and Karolina Kowalkiewicz) will hold an open workout at Madison Square Garden. Fans are invited to watch the event, with free tickets being distributed beginning at 9:00 am ET at the MSG box office and doors opening at 9:30 am ET.

The verbal jabs will be flying as the UFC 205 headliners take to the mic during the UFC 205 press conference at 3:00 pm ET. Tickets for fans will be available beginning at Noon ET from the MSG box office and doors will open at 2:30 pm ET for what will surely be a can’t-miss event.

You’ll want to be near a TV set at 4 pm ET on Friday when special UFC celebrities help with the ringing of the closing bell at the New York Stock Exchange. The spotlight moves over to Madison Square Garden for weigh-ins at 6 pm ET with doors opening at 5:00 pm ET. Weigh-ins are a ticketed event, so if you can’t join us at The Garden, make sure to tune in to FS1 for all the action.

The day has finally arrived. An incredible night of fights begins at Madison Square Garden at 6:30 pm ET with doors opening at 5:30 pm ET. The card has 13 fights, including three title clashes, so don’t miss UFC 205. Pre-order the Pay-Per-View now, or if you are in New York City a few tickets still remain so you can join us at Madison Square Garden on Saturday night.