We're On The Ground In New York City All Week Covering Yet Another Card For The Ages
By Steve Latrell, on Twitter: @TheUFSteve • Nov. 1, 2021

A weeklong journal covering the UFC's return to The Big Apple for UFC 268: Usman vs Covington 2.

Any time the UFC comes to town, the fight week theatrics can often overshadow the good things the impactful things the company does in each community.

One of those things this week was the donation to the incredible NYPD ‘Cops & Kids program, which among many other great things refurbishes old fire and police precincts into combat sports gyms for community kids. Boxing and MMA are taught in after-school programs and kids have a place to safely undertake their training.

UFC.com's very own Tom Gerbasi was on site. He has a full story coming next week, but he had this to say of the event:

"It may have been the cleanest boxing gym I've ever been in, and UFC President Dana White agreed, but what an important place for the kids of this Brooklyn neighborhood to have. The Cops & Kids gym is a refuge for so many, and as Pat Russo, who runs the program, told me, his job is to get the kids before the gangs get them. There are so many positive things for them to take away from being a part of this, and they got a treat yesterday, as the response that Dana and UFC middleweight contender Uriah Hall got from the kids in the gym was something to see." 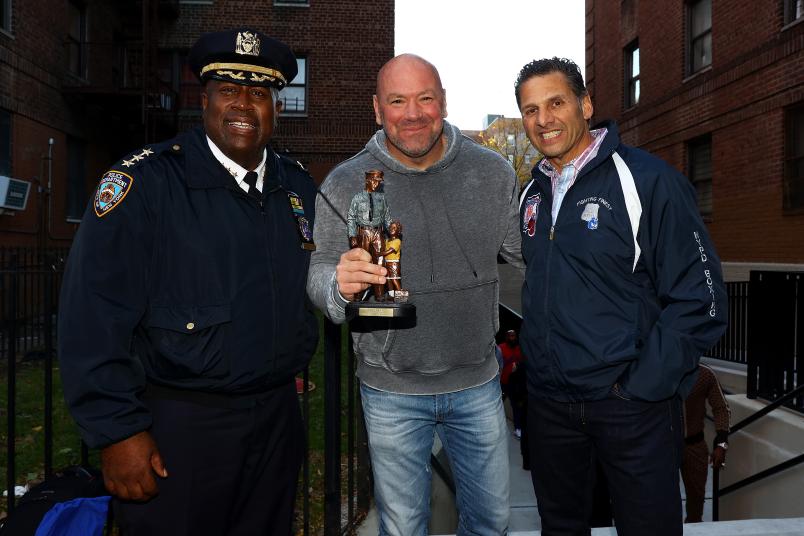 "I’m very pro-police, pro-military, and who isn’t pro-kids and getting kids off the street," said UFC president Dana White. "Plus, I came out of a PAL program, too, and it changed my life. What you get out of something like this is immeasurable. Lessons learned here, how hard you push yourself in a place like this, the types of people you meet, the different paths that people take, you name it." 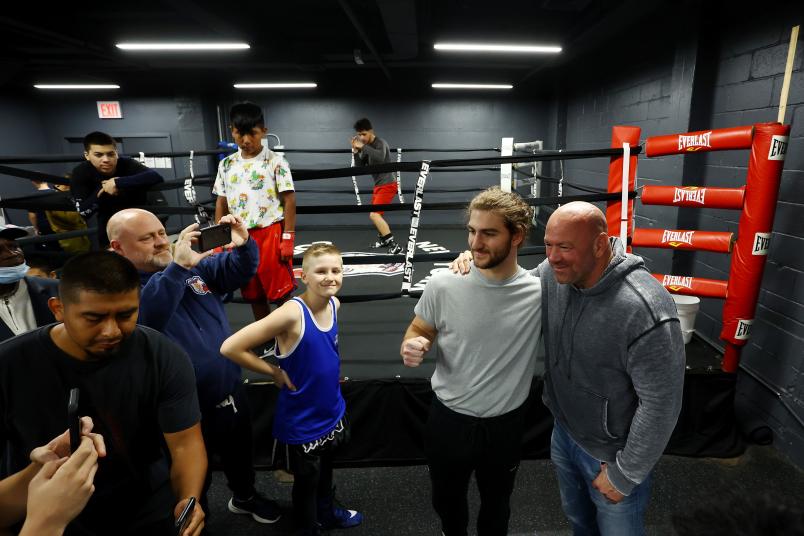 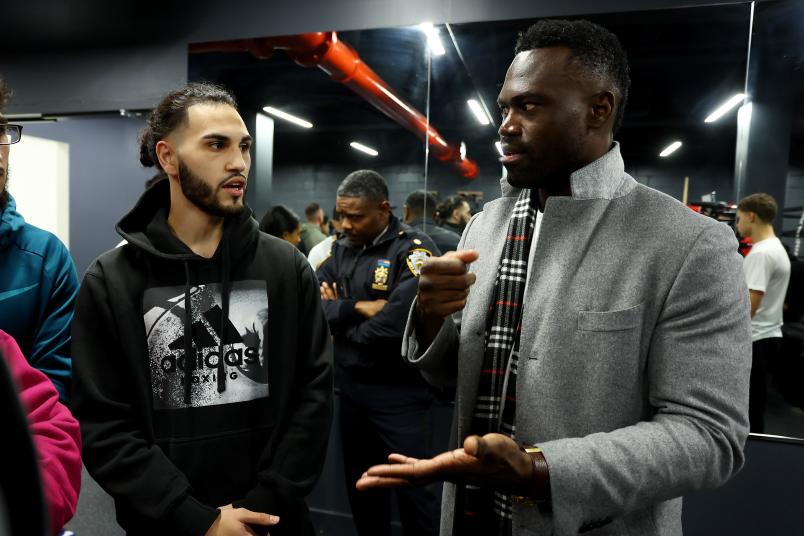 The pre-fight presser is just about to pop off and there are absolute scenes throughout Madison Square Garden. 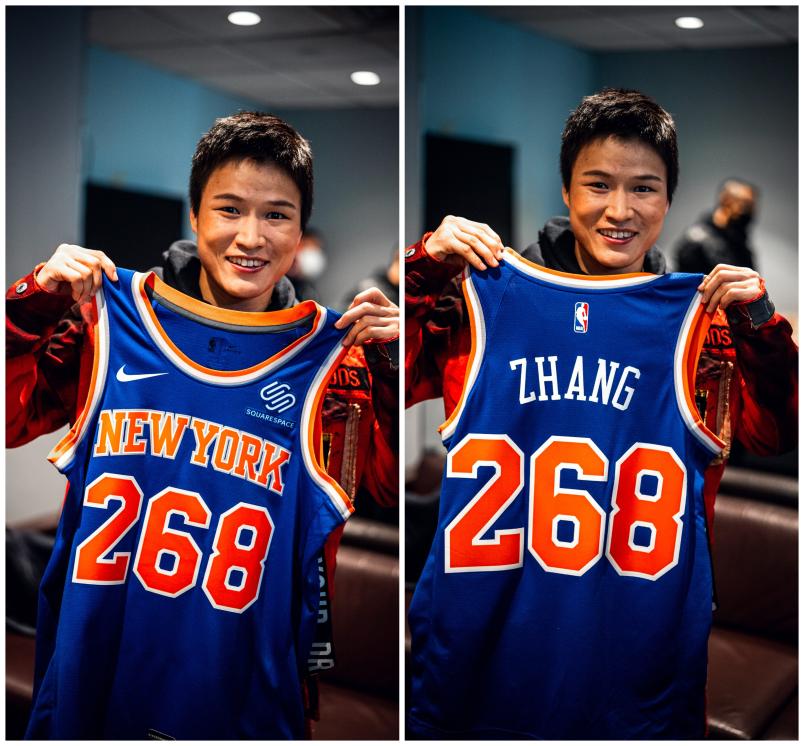 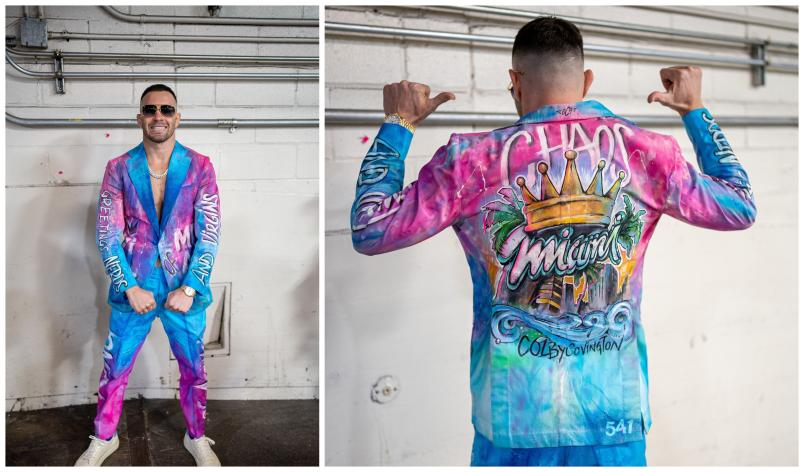 "The Count" Michael Bisping taking in the press conference in the very room where he promoted his bout vs Georges St-Pierre at UFC 217: 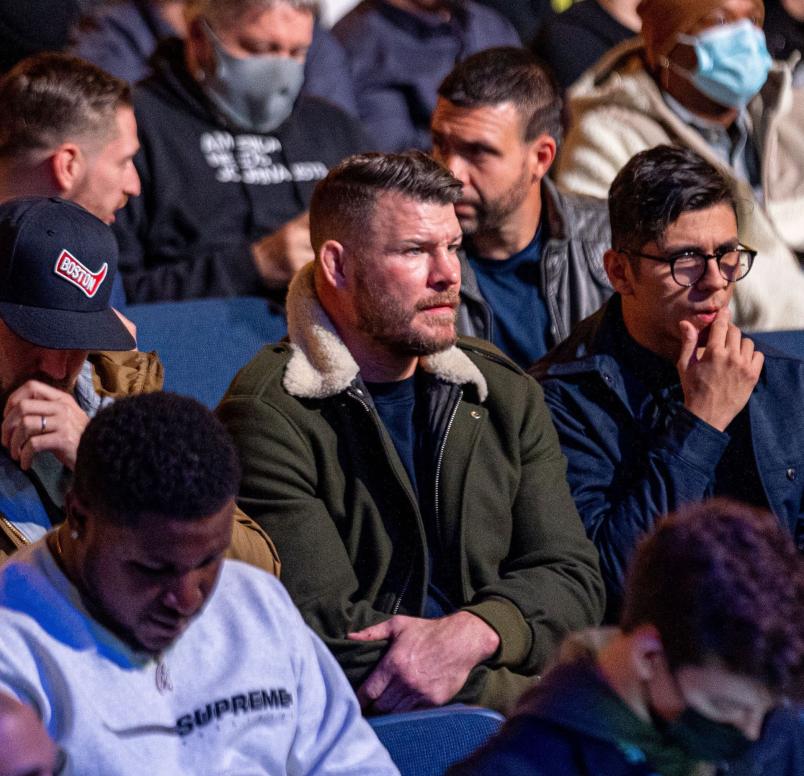 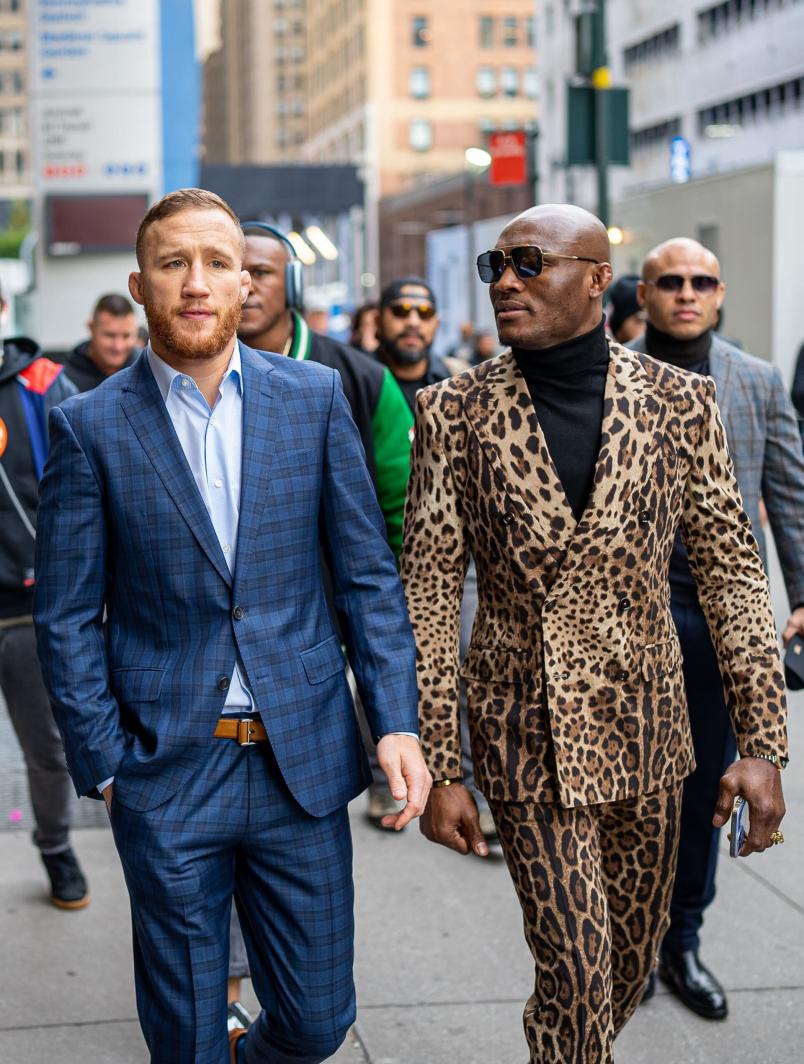 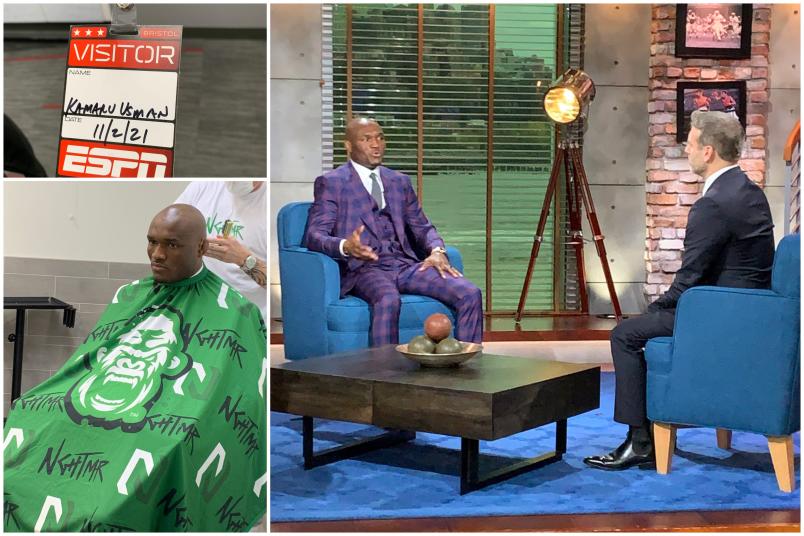 The cape, donned by Kamaru Usman ahead of a live ESPN appearance on Max Kellerman's show earlier this week, is but one item the many items bearing his iconic "Nigerian Nightmare" moniker. He has sported the necklace all week, and the letterman's jacket during the UFC 268 media day appearances (select items available on his website www.usman84kg.com).

"You can't get punched in the face forever," he explained of his merchandise venture. 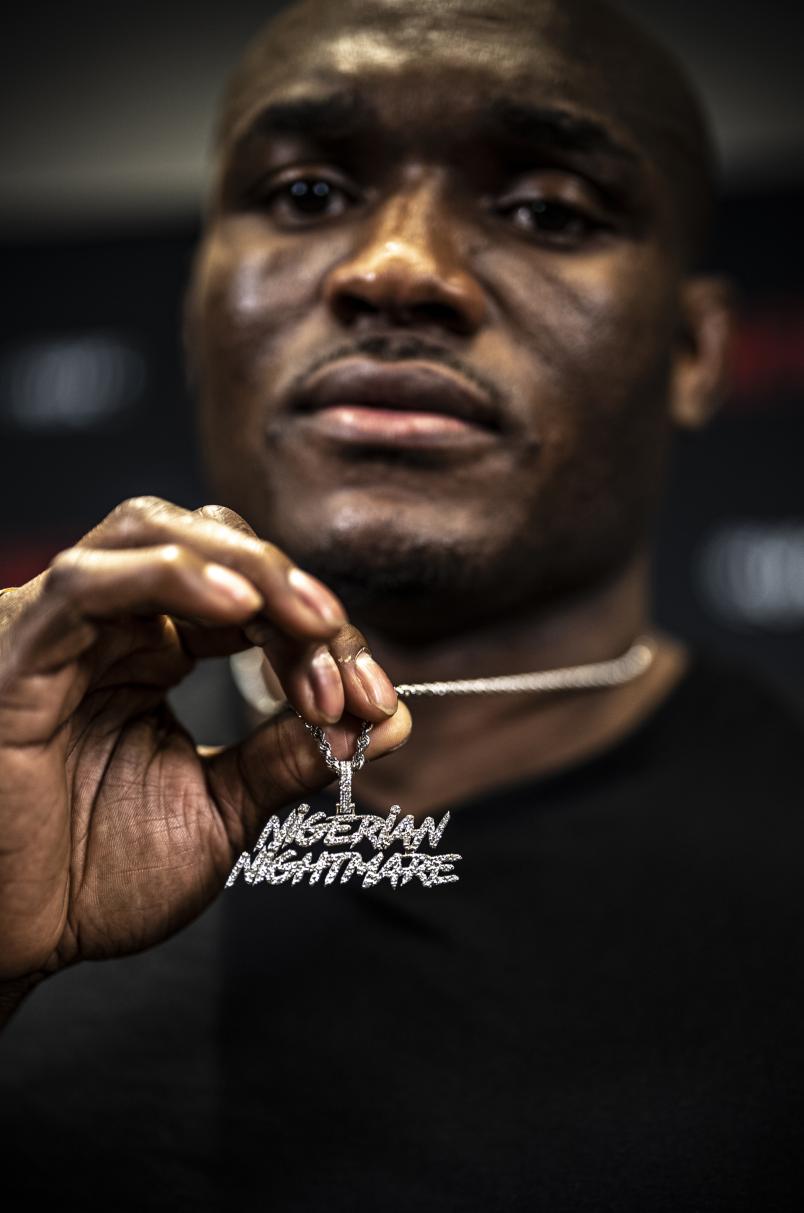 You can see Usman's entire appearance on This Just In with Max Kellerman below. It was a quality TV five minutes that not only summed up his history with Covington to date, but also started the firestorm of chatter about his dream of boxing Canelo Alvarez.

The disbelief that follows from Kellerman was priceless before he forced Usman to comment a potential super-fight vs his friend Israel Adesanya.

There's an old saying "out of the frying pan and into the fire" and I can't help but think of it when I see newcomer CJ Vergara out here killing it like a pro in his first UFC fight week. Just a few weeks back he was winning a contract on DWCS with an arsenal of knees, and now he'll be opening the show on the UFC 268 early prelims on arguably the biggest stage in the MMA world. But spend five minutes around the guy and it seems like he's been doing this his whole life. A true manifest destiny. 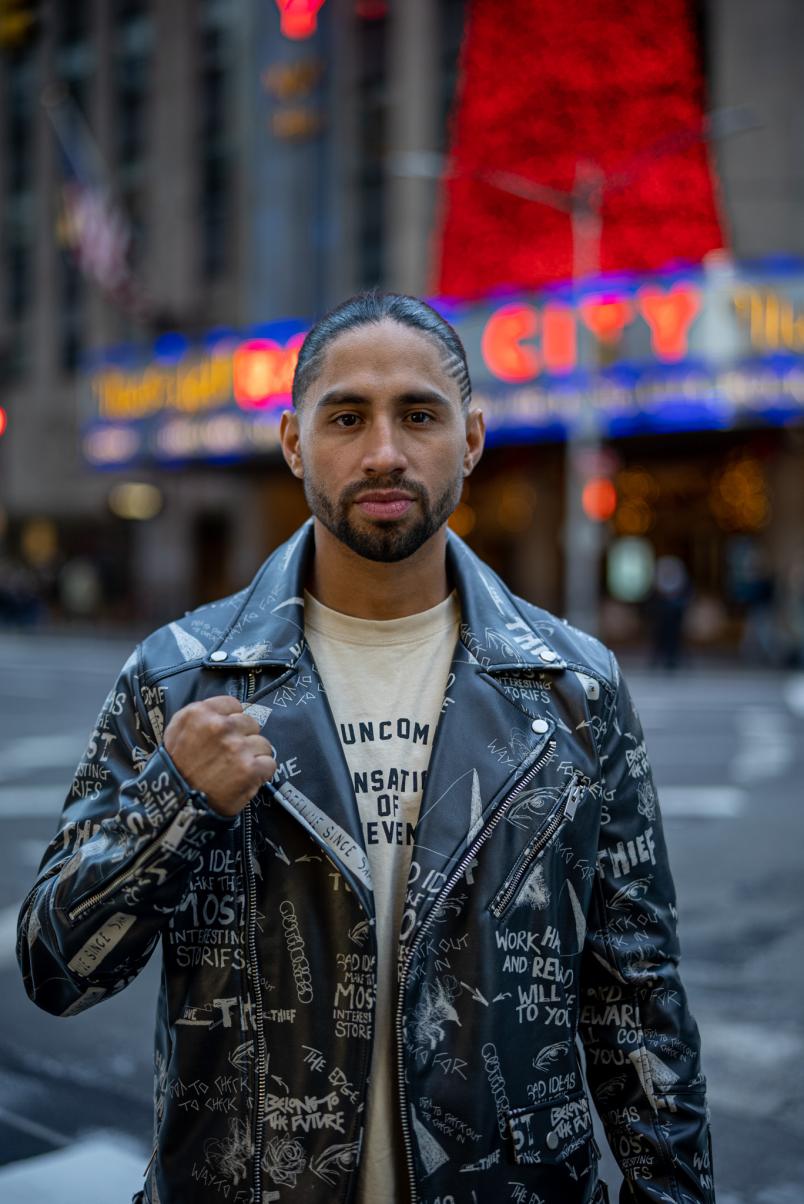 Flyweight C.J. Vergara on the streets of New York ahead of UFC 268 (Photo by Maddie Roth/Zuffa LLC)

"You guys just saw me on Dana White's Contender Series, Week 2 this season. Here we are two months later from the shadows to The Garden. New York City! UFC 268! I'm the opening act, be sure to tune in. It's going to be the most electrifying opening fight you've ever seen."

Vicente Luque (@VicenteLuqueMMA) will weigh-in on Friday in Manhattan as a backup to the welterweight title fight on UFC 268, per his manager Ali Abdelaziz (@AliAbdelaziz00) and the UFC. 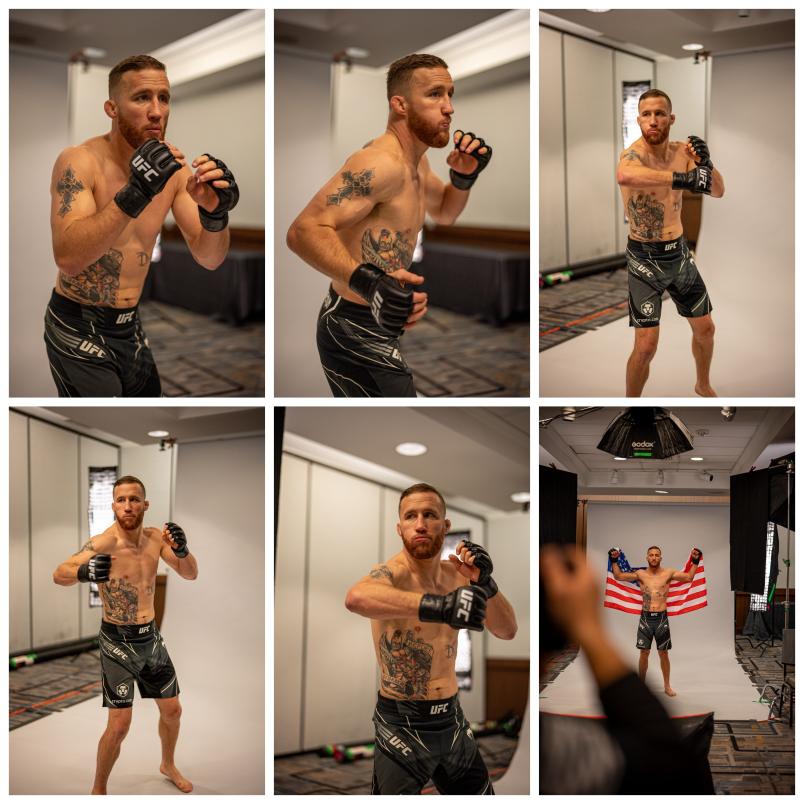 While some fighters are signing posters, others are across the hall getting their pre-fight portraits taken and doing a little shadowboxing. The video clips are often used for the features you see inside the arena on fight night. 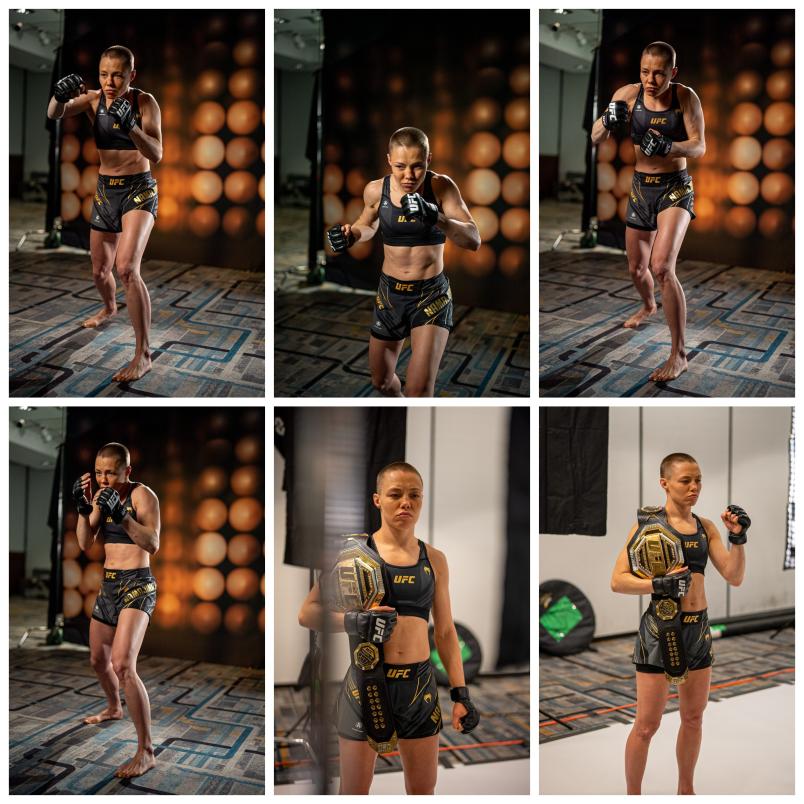 Just as often, it's a chance for some downright cool photos, as evidenced by these snaps of teammates Just Gaethje and strawweight champ Rose Namajunas.

Poster signing is my personal visual indicator that fight week is actually underway. It moves from the theoretical "That should be a fun event" to "oh, this is really happening." It sets in motion the wheels of the remaining festivities, including media day, the pre-fight conference, the weigh-ins and more. 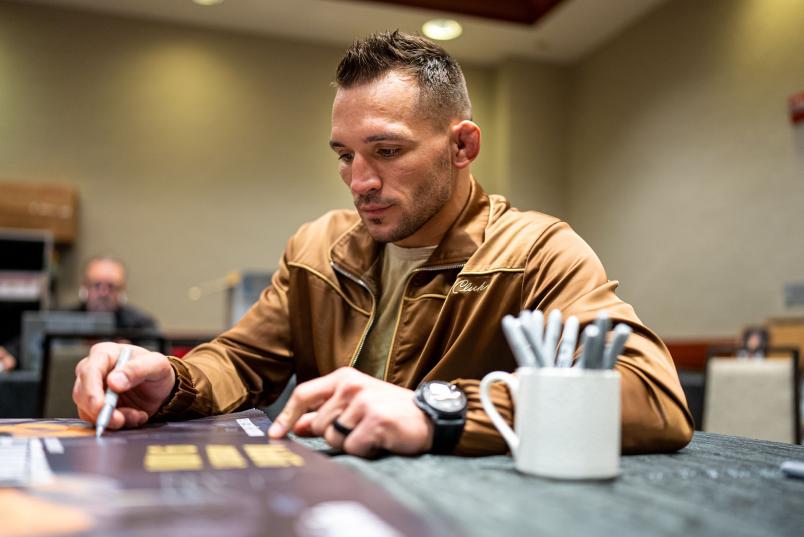 Traditionally when fighters arrive to the host hotel and check in with UFC staff, the first order of business is to scratch their John Hancock across a limited number of official event posters. Every fighter on the card signs the posters (which make invaluable souvenirs for a lucky few collecters), but it's an extra special moment when your own face is on the poster staring back at you, such as it was for main card opponents Michael Chandler and Justin Gaethje. 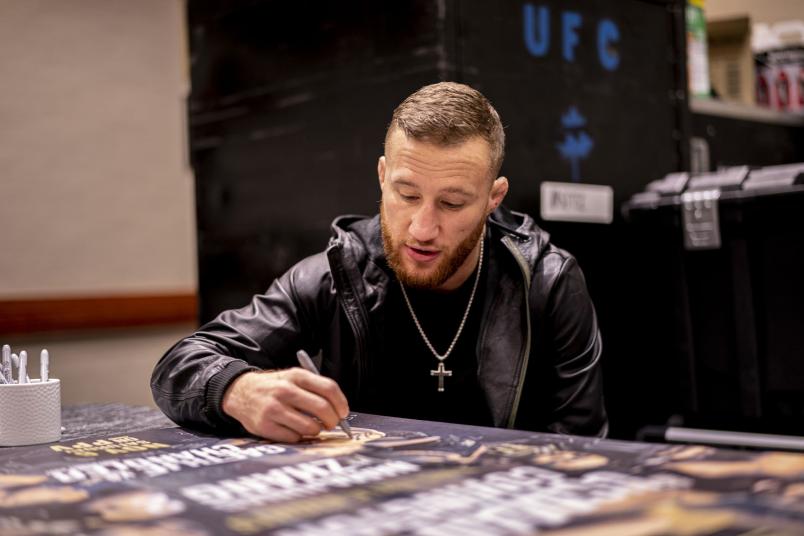 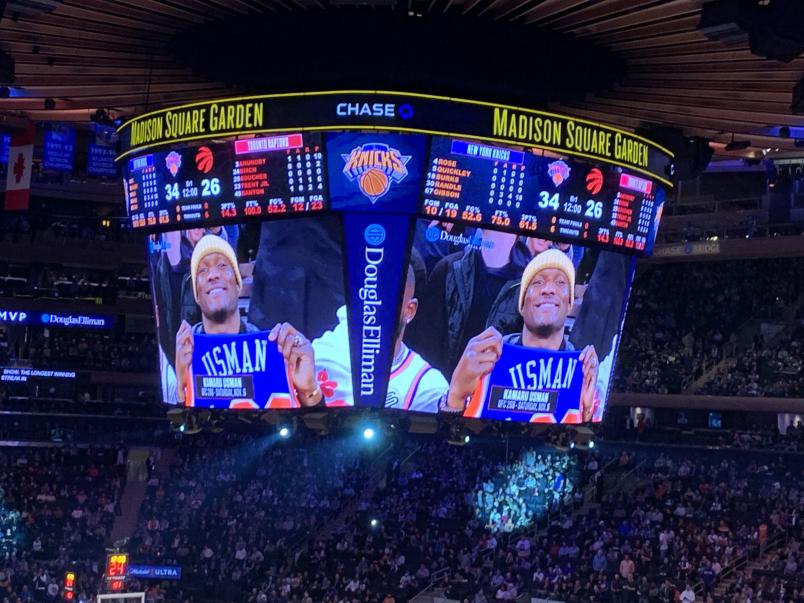 Fight week kicked off in the most New York City way possible: at a Knicks game at Madison Square Garden Monday night.

I spoke yesterday about how far the UFC has come in a relatively short period of time--particularly in New York State--and last night perfectly exemplified that journey. Seated on the floor court-side, chatting up the likes of comedians Tracy Morgan and Chris Rock, was your welterweight champion Kamaru Usman.

The crowd roared as he held up his honorary Knicks jersey in a preview of the noise he can expect to hear this Saturday night. From a sport that was illegal in this very zip code just six years ago to being recognized by one of the cornerstone franchises of the NBA in their house has truly been a ride unlike any other.

Even on a cool winter Monday evening, The Garden was still packed to the rafters. When you sit down to enjoy any sporting event at "The Mecca," the event begins with a short film about the history that has been made under that roof, highlighting the greats like Muhammad Ali and Patrick Ewing. The moment was not lost on the champ, watched the entire game and let the notion that his own moment in that history begins Saturday sink in.

I promise this week's blog isn't going to be all about the UFC's history in this state, or the history of old sporting arenas, but if you watch UFC 268 with those stories in mind, it adds a color of triumph to a company that has continually found ways to buck the system and overcome the odds.

Our talented videographer Cory Kamerschak put together a nice reel of the already-numerous MSG highlights that UFC fighters have to their credit. You can check it out here below.

If you're here in New York City this week, come join the festivities and say hello. In a sure sign that things are slowly returning to normal, free public events are set to take place this week.

Don’t miss the final press conference before UFC 268 on Thursday, November 4th in the Hulu Theater at Madison Square Garden.

This event is open to the public. To reserve your spot, click here.

Come see all the fighters weigh-in for UFC 268 on Friday, November 5th in the Hulu Theater at Madison Square Garden.

This event is open to the public. To reserve your spot, click here.

Even in the afterglow of an event as hugely special as Abu Dhabi's UFC 267, the table is set for Saturday's UFC 268 to be among the most memorable cards of the year.

Like many of my fellow UFC staff, I don't hesitate to volunteer my services when the promotion brings the fireworks to Madison Square Garden. When the subways are roaring beneath your feet, the smell of pizza slices are wafting through the air and MMA royalty are roaming the streets of Manhattan, fight week is elevated with a singular, palpable energy that is peerless in the world of sports. If you haven't experienced it yet, add it to your bucket list.

Just off the top of your head, think about the MSG fights that were not only some of the best New York's history, but in transcended time and place to be some of the biggest moments in the company's history.

Flashback to UFC 205 (the card itself was a matchmaking work of art) when Conor McGregor's TKO of Eddie Alvarez crowned him the first simultaneous two-division champ in promotion history. Or the three title-fight UFC 217 when Rose Namajunas shocked the world with her first round TKO of Joanna Jędrzejczyk to claim the strawweight strap, and we witnessed the swan song of the great Georges St-Pierre as he claimed the middleweight title. Or how about UFC 244, when Jorge Masvidal bested Nate Diaz to become the one and only holder of the BMF belt? Just a few of the nearly-mythical moments that are bound together in the same special book of UFC history, all because they transpired in the city that never sleeps.

Arguably what makes these Big Apple events so special is the many years in the wilderness that there were no events in New York at all. It still boggles the mind that less than six years ago, MMA was still not legal in the state, and that epic UFC 205 card I mentioned above was the first...and that was in 2016.

If you're a newer UFC fan and don't know this part of the story, I strongly encourage you to watch the short, excellent documentary Judgement Day (just above these paragraphs) that details the chaos of moving what was expected to be UFC's New York debut (UFC 12 in 1997, scheduled for Buffalo) to the small down of Dothan, Alabama in just a few short days when New York State suddenly outlawed the sport.

Mercifully, cooler heads eventually prevailed many years later, and now the "The Mecca" of Madison Square Garden can add names like Conor McGregor, Daniel Cormier and Rose Namajunas to it's annals of historic fights, alongside names like Muhammad Ali and Rocky Marciano.

So here we are on the ground in NYC again, on the lookout for more of those storied moments as yet another epic Empire State card comes together for Saturday. And as this is the UFC's first return to the city since the global pandemic turned the world upside down, the energy is feeling even more momentous than usual.