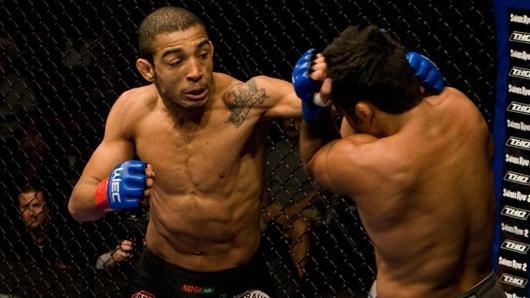 Looking for a way to get your fix of fighting action during this rare stretch without a live event?

Fire up UFC FIGHT PASS and take a walk down memory lane with these memorable fights from current UFC champions.

Given her current standing as one of the biggest stars in the UFC, it’s interesting that Rousey had an inauspicious “big league” debut as part of the main card on a Strikeforce Challengers event.

At the time, Rousey was just 2-0 and fighting in the 145-pound weight class. She was a pile of raw potential, her Olympic pedigree establishing her as a prospect, but no one was quite sure where her ceiling as a fighter stood.

Just 25 seconds after the contest started, it was over, Rousey having pressured her way into the clinch and dove on an armbar in a flash. D’Alelio screamed in pain, Rousey shouted at referee Steve Mazzagatti that she felt something pop and the bout was brought to an end.

While D’Alelio objected to the stoppage, the outcome wouldn’t have changed had the fight continued. It took less than 30 seconds in the cage for everyone watching to see that a potential star had just arrived.

After picking up a pair of victories in three tries inside the little blue cage of the WEC, Johnson made his UFC debut on February 5, 2011, taking on the Japanese superstar Yamamoto in the Facebook prelim for UFC 126.

From the outset, it looked like “Mighty Mouse” was operating in fast forward, buzzing around the Octagon at a remarkable pace and using that speed to control the action.

What really stood out – and continues to be a hallmark of the flyweight champion’s repertoire – is how quickly he changed levels and entered in on takedowns. As Yamamoto stepped forward to throw a strike, Johnson ducked under and put him on the floor, maintaining the grappling advantage and outworking the explosive striker from start to finish.

Johnson would win his next fight against Miguel Torres three months later to earn a shot at UFC bantamweight champion Dominick Cruz later in the year.

This is where Duane “Bang” Ludwig’s influence on the fighters at Team Alpha Male really started to shine through, as Dillashaw walked into Montreal on short notice and knocked out Tamura with what has become his signature striking combination.

After a first round where the former Ultimate Fighter finalist controlled the action and found his rhythm, Dillashaw ended things quickly in the second, faking low and throwing high with a kick as the Japanese bantamweight ducked down. Rapid-fire right hands followed and the fight was over.

If you watch Dillashaw’s fight with Renan Barao at UFC 173, you’ll see the Cal State Fullerton alum land the same kick as part of the all-out assault on the Brazilian that resulted in a new bantamweight champion being crowned.

WEC 34 is one of those events you look back on now and marvel at the collection of names that competed on the same fight card. The opening bout of the night was Dominick Cruz’s bantamweight debut and the first fight between Urijah Faber and Jens Pulver headlined the show.

An unassuming 21-year-old Brazilian representing Nova Uniao named Jose Aldo was in the second bout of the evening and after a quick touch of gloves, he began walking “Pequeno” down.

Just beyond the three-minute mark of the second round, Nogueira tried to engage Aldo from his back, but the future featherweight champion would have none of it. Aldo started unloaded sharp punches, dropped to the ground and quickly moved into mount. More punches and elbows followed, the bout was stopped and Aldo celebrated with a corkscrew back flip off the top of the cage.

Five fights and 17 months later, he would ascend to the top of the 145-pound weight class, a position he maintains to this day.

Pettis’ flare for the dramatic started long before he landed “The Showtime Kick” in the closing minute of the final fight in WEC history.

During the build-up to this bout, a film crew was following the Roufusport product from MTV’s World of Jenks, capturing his preparation and profiling the aspiring lightweight fighter’s life outside the cage. Pettis was coming off his first career loss and worried that a second consecutive setback against the Team Alpha Male representative would result in his dismissal from the WEC.

Midway through the opening frame, Pettis delivered the perfect ending, offering a quick 1-2 to gauge distance before dropping Castillo with a left high kick. The follow-up strikes on the ground sealed the deal and kicked off a four-fight winning streak that would end with his thrilling victory over Benson Henderson at WEC 53.

When Hendricks walked into the KeyArena to face Waldburger, he was a decorated collegiate wrestler coming off his first loss. At that point, he had yet to adopt the “Bigg Rigg” moniker or establish himself as a potential contender in the welterweight division.

He was another tough wrestler in the middle of the pack in the 170-pound ranks. That changed on a dime in Seattle.

Shortly after Waldburger drove home a body kick, Hendricks stepped forward and unleashed a clubbing left hand that caused his opponent to get all twisted up as he fell to the floor. The sound of the blow resonated throughout the venue, sounding like a baseball bat launching a “no doubter” into the left field seats.

Hendricks would add five more victories to his resume before meeting Georges St-Pierre at UFC 167 and then claiming the vacant welterweight strap in his next bout at UFC 171 earlier this year.

Plenty of fighters make their UFC debuts on short notice. Not many make that first foray into the Octagon two weeks after getting the call and pitch a shutout against a tough veteran out like Alessio Sakara.

With just four fights under his belt, Weidman stepped up as a late replacement for Rafael Natal and proceeded to dominate the action against “Legionarius,” grinding out a unanimous decision even though he entered the bout nursing a rib injury.

Despite an undefeated record, solid all-around skill set and Matt Serra telling anyone that would listen that his latest pupil was something special, Weidman continued to fly under the radar after his debut win. It wasn’t until three fights later when “The All-American” turned in a similar effort against Demian Maia on FOX that fight fans really sat up and took notice of the man that now rules the middleweight ranks.

This was Jones’ coming out party – the fight that elevated the skinny kid from Endicott, New York into the most must-see prospect in the sport. Fighters simply didn’t manhandle Bonnar the way Jones did, especially not 21-year-olds with a lone UFC appearance to their name.

He executed a brilliant belly-to-back suplex and dropped “The American Psycho” with a spinning back elbow, a move that has become a staple of his arsenal over the years, dominating the action from the word “Go” and establishing himself as the one of the brightest prospects to come along in quite some time.

Five years later, Jones has somehow managed to exceed the lofty expectations that were set for him following this performance, climbing to the top of the 205-pound ranks and putting together one of the most impressive runs of success in MMA history.

Now 27 and riding an 11-fight winning streak, Jones has shown no signs of slowing down or letting up.

The UFC heavyweight champion was already regarded as a future title contender after having raised his record to 7-0 with victories over veterans Cheick Kongo and Ben Rothwell, but this was designed to be the contest that showed exactly where Velasquez stood in the heavyweight ranks.

Nogueira was coming off his Fight of the Year victory over Randy Couture at UFC 102 and with 39 career fights heading into the main event of the inaugural event in Australia, “Minotauro” had more than five times as much experience as his American counterpart.

Velasquez cemented his standing as a legitimate threat in the heavyweight ranks with a first-round knockout victory over the Brazilian legend, connecting on a short inside right than sent Nogueira crashing to the canvas.