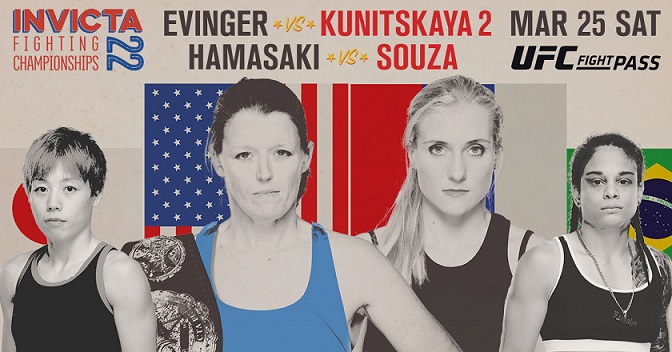 Saturday night at the Scottish Rite Temple in Kansas City, Missouri, a host of the top female fighters in the world will cross the threshold into the Invicta FC cage in an event that airs live and exclusively on UFC FIGHT PASS.

With the Octagon in a crate and en route to KeyBank Center in Buffalo, New York, the site of UFC 210 on April 8, we thought we’d get you up to speed and energized about the action taking place this weekend at Invicta FC 22.

These ladies closed out 2016 in the Invicta FC cage with a championship fight that ended in controversy and now they’re set to do it again with the title once again hanging in the balance.

In their first encounter, Evinger took the fight to the canvas right out of the gate, but as she worked from top position along the fence, Kunitskaya attacked with an armbar from bottom that forced the bantamweight champion to defend. 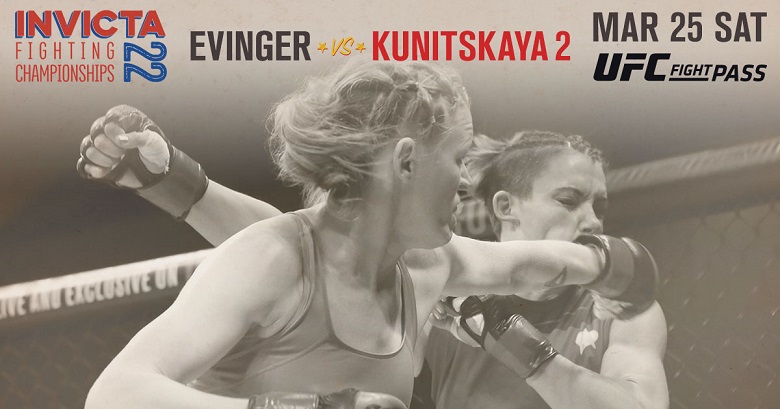 That’s where things got confusing.

Evinger began standing on Kunitskaya’s face – an unorthodox, but legal maneuver – but referee Mike England instructed her to desist, telling her twice to “Get that foot off her face.” Seconds later, Evinger verbally submitted and Kunitskaya started celebrating, but her excitement wouldn’t last long.

Evinger appealed the outcome, citing England’s instructions as having compromised her ability to defend herself, and the Missouri athletic commission overturned the verdict, ruling the bout a no contest, sending the belt back to “Triple Threat” and setting up Saturday’s championship rematch.

Prior to their bout at Invicta FC 20 in November, Evinger had been on a tear, rattling off nine straight victories, including a pair of successful title defenses, while Kunitskaya ended a nearly four-year hiatus with a loss in March before rebounding with a second-round stoppage win in September.

While the veteran champion was expected to roll through the Russian challenger, Kunitskaya showed she was game and their second meeting this weekend should be electric.
CLICK HERE TO START A SEVEN-DAY FREE TRIAL AND JOIN UFC FIGHT PASS

The co-main event of the evening features reigning atomweight champion Hamasaki moving up to strawweight to challenge former titleholder Souza in her first bout since losing the belt to Angela Hill by split decision last May.

Hamasaki is one of the underappreciated greats on the women’s side of the sport – a 15-fight veteran who dominated in Jewels prior to arriving in Invicta FC, and her lone career loss came at the hands of UFC strawweight contender Claudia Gadelha. She’s since won five straight bouts, including her championship victory over Herica Tiburcio and a pair of successful title defenses, most recently battling Jinh Yu Frey at Invicta FC 19 in a bout that ended via doctor stoppage. 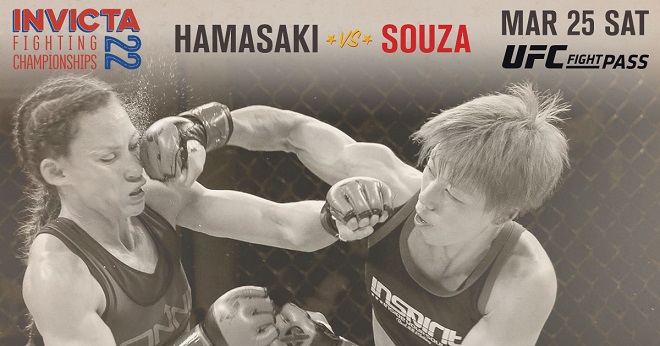 The 26-year-old Souza is confident and talented, having won the strawweight title in her promotional debut with a fourth-round triangle choke submission against Katja Kankaanpaa before starching DeAnna Bennett with a nasty body kick 90 seconds into her first title defense. She came out on the wrong side of the split against “Overkill,” who has since returned to the UFC Octagon, and a win over the Japanese veteran will once again establish “Livinha” as a dominant force in the 115-pound weight division.

A battle between perennial contenders in the strawweight division, this should be a Fight of the Night contender on Saturday.

After starting her career with eight straight wins to earn a shot at Souza and the strawweight title, Bennett has dropped back-to-back contests heading into this one and is in dire need of a bounce back performance. When she’s at her best, the Utah-based talent is a high-output, stick-and-move fighter who overwhelms the opposition.

Esquibel will be making her sixth trip into the Invicta FC cage and she too is looking to rebound from being on the wrong side of the results last time out as she dropped a decision to prospect Alexa Grasso. The Jackson-Wink MMA fighter was on the brink of title contention before injuries and a failed attempt to join the cast of The Ultimate Fighter kept her out of action prior to her return at Invicta FC 18, but a strong showing against Bennett will have her right back in the mix.

While atomweight champion Hamasaki is moonlighting at strawweight in order to keep busy, her next challenger could emerge from this intriguing pairing.

Frey shared the cage with Hamasaki last time out and controlled the action in the opening round before the champion blasted the challenger with a right hand that opened a large cut above Frey’s left eye that forced the bout to be halted. Prior to that contest, the Arlington, Texas native had won three straight, showcasing her well-rounded arsenal and outstanding conditioning.

This time out, she welcomes Morandin to the Invicta FC cage for the first time.

A standout under the Aspera FC banner in Brazil, Morandin is a perfect 9-0 in her career, with six of her nine victories coming by way of stoppage. This is a huge step up in competition for her, but also a tremendous opportunity to instantly establish herself as a contender, so don’t be surprised if the “Evil Princess” comes out of the gate looking to make an impact.

Three straight victories earned Brown a shot at Hamasaki and the atomweight title. Now after a one-off at strawweight, “The Bully” returns to her natural division to square off with Cummins. When at her best, the FIT NHB product pushes a torrid pace and overwhelms her foes, with two of her three previous Invicta FC victories ending by submission in the first round.

Following an unbeaten amateur career, life as a pro has been a little more inconsistent for the 29-year-old Cummins, who looks to snap a three-fight losing streak under the Invicta FC banner here. She got back into the win column last time out with a second-round submission win by – I’m not making this up – knee on neck choke.

This should be a spirited affair from start to finish, with the winner taking another step forward in the deep and talented atomweight division.

A teammate of UFC welterweight standout Gunnar Nelson, Davidsdottir collected a unanimous decision win over Ashley Greenway in her promotional and professional debut back in September. The 31-year-old “Tsunama” finished her amateur career on a four-fight winning streak and will look to keep her winning ways intact in her sophomore appearance in the Invicta FC cage on Saturday.

Like her opponent, Martin began her journey into the professional ranks with a decision win, traveling to Beijing, China in December to turn back a far more experienced foe. Now fighting out of Tiger Muay Thai after winning a tryout with the respected outfit, the 23-year-old Martin won all three of her amateur appearances as well and will look to maintain her unblemished record in her first Invicta FC appearance this weekend.

All Schwartz did in her first professional bout was dominate and derail the rise of Muay Thai standout Tiffany “Timebomb” Van Soest, finishing the San Diego-based strawweight in the second round at Invicta FC 19. Now she squares off with Maverick, who wasted little time getting her pro career started on the right foot, choking out Samantha Diaz in the first round of their meeting at Invicta FC 20.

Two neophytes coming off impressive stoppages victories battling to move ahead and make a name for themselves in the premier organization in women’s mixed martial arts – what’s not to like?

After earning a shot in the Invicta FC cage by winning a Tuff-N-Uff Future Stars of MMA tournament, Spencer impressed in her debut, earning a first-round stoppage win over Rachel Wiley back at Invicta FC 14. Now fighting at featherweight, the 26-year-old will look to make it 2-0 for her career in Saturday’s opener.

In order to do that, she’ll have to get through McElhaney, a former gymnast who has tallied 26 broken bones and half-a-dozen surgeries prior to becoming a professional cagefighter. The 25-year-old “Baby Hulk” won her pro debut in December, defeating “The Pink Ranger,” Bryana Fissori, by unanimous decision.