Fight with Oliveira not short notice for Giagos 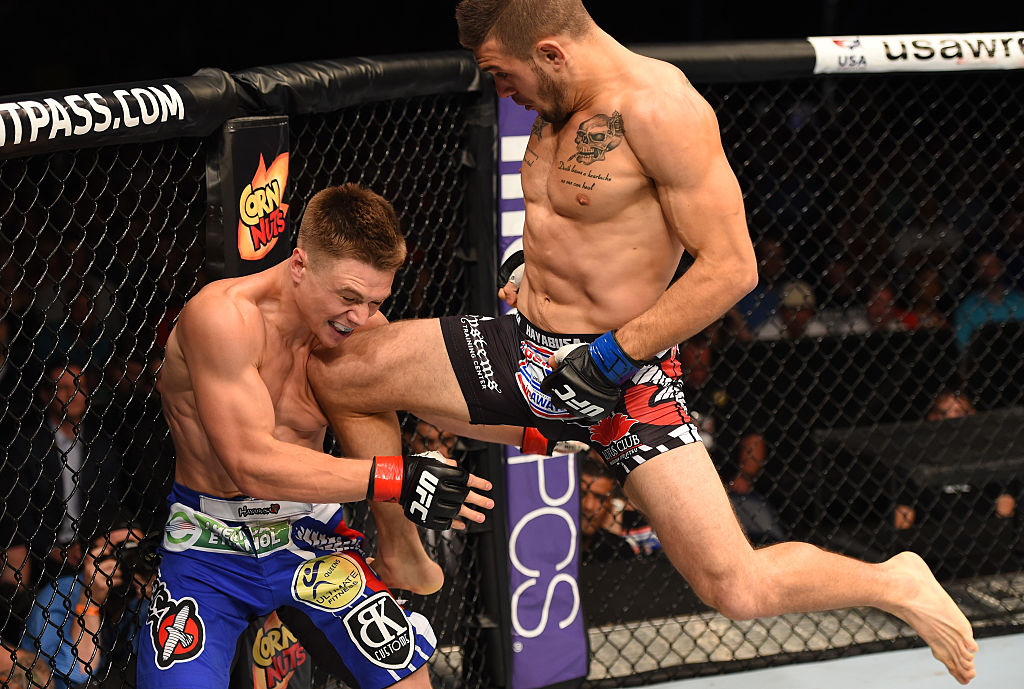 Christos Giagos didn’t get a full training camp for his return to the UFC against Charles Oliveira this weekend, but that’s not an issue for “The Spartan.”

“I stay in shape and I’m always ready,” he said. “So this is not short notice for me.”

Giagos’ confidence is evident, even if he is going into the lion’s den to face Sao Paulo’s Oliveira in Sao Paulo, but this isn’t bravado from the Californian. It comes from a place that he needed to get to in order to earn another spot on the UFC’s lightweight roster after going 1-2 the first time around.

“My last UFC fight, I thought I fought great,” Giagos said of his 2015 bout with Chris Wade. “That was a real short notice one and that was the reason why I always stay in shape now. That’s the first fight I ever gassed out in because I took it on two and a half weeks’ notice and I fought a wrestler. You know that wrestling’s always the most exhausting part of fighting, but I promised myself I would never let myself get out of shape again.”

The decision defeat to Wade ended Giagos’ first Octagon stint, one in which he defeated Jorge de Oliveira and also lost to Gilbert Burns. The release came as a surprise to Giagos, but now he had to figure out his next steps.

“I definitely had to put my ego aside, especially since I felt like I didn’t rightfully get cut,” Giagos said. “I didn’t even lose two fights in a row. I was coming off a win and then I fought a hard battle, so that was tough to get through. I did go through a little depression, then I snapped out of it and was like, ‘Look, this is the position you’re in now. You can sit here and cry like a baby or you can do something about it.’ And what I did was get my stuff together and I started working hard again, and I wanted to prove myself again.”

Seven months after the Wade bout, Giagos was stopped by future UFC contender Josh Emmett, but following that defeat, he won four of five bouts, with the only setback a split decision loss to Shamil Nikaev. This success got fans wondering when he would get his second shot in the Octagon, and Giagos started making some noise of his own.

“I thought there was a chance, so that’s when I started blasting social media, just to have (UFC President) Dana White look at my fights,” he said. “If you look at them and still don’t think I belong, then cool. But just look. And after I did all that social media, my manager called me and told me that they needed a replacement to fight Charles Oliveira, and I stepped in.”

You get the impression that Giagos would have fought Daniel Cormier at heavyweight if he was asked to, but despite his fighting spirit, in the three-plus years since his last UFC bout, he has learned that at this level, tough ain’t enough.

“I’ve grown as a person as well as a fighter,” said the 28-year-old. “I’m a lot more patient and I’ve learned a lot more. I used to think you had to be tough in order to succeed in this sport. But there’s a lot of thought and a lot of intelligence necessary, so I feel like my Fight IQ has grown a lot more. I’m studying more and investing in myself a lot more rather than just seeing how tough I can be. Overall, I’ve grown in every aspect.”

On Saturday, he gets to show off those lessons learned.

“I’m glad to actually be back where I know I belong,” Giagos said. “This opportunity came and I pounced on it. I’m super excited because obviously that’s the ultimate goal, to be a UFC star and now I’ve got my chance. I’ve got everything put in front of me for success. Now I’ve just got to make it happen.”