Ben Rothwell (36-9) doesn’t just have sick dance moves. The No. 4-ranked heavyweight is one of the most versatile fighters in his division and is riding the second longest active finish streak in the entire UFC.

Junior Dos Santos (17-4) is a former UFC heavyweight champion and his 730 career significant strikes landed put him at No. 1 in heavyweight history.

Rothwell submitted Josh Barnett last time out, becoming the first fighter to submit “The War Master” in his 42-fight career. But before two straight submission wins, Rothwell knocked out Alistair Overeem and Brandon Vera to showcase his always-improving standup.

It’s been a struggle for Dos Santos to string wins together recently. But his last win – a hard-fought decision against Stipe Miocic – and a win over Rothwell will put him in prime position for a title shot should Miocic take out Fabricio Werdum at UFC 198.

The five-round heavyweight main event at Fight Night Zagreb between Rothwell and Dos Santos is our No. 1 reason to watch this Sunday afternoon.

Derrick Lewis (14-4) has been turning up the volume lately on his verbal output to make some noise in the heavyweight division.

“The Black Beast” roared last time out, finishing Damian Grabowski with a first round KO. The added chatter on social media has earned him a late replacement fight against UFC veteran Gabriel Gonzaga (17-10) in the co-main event. 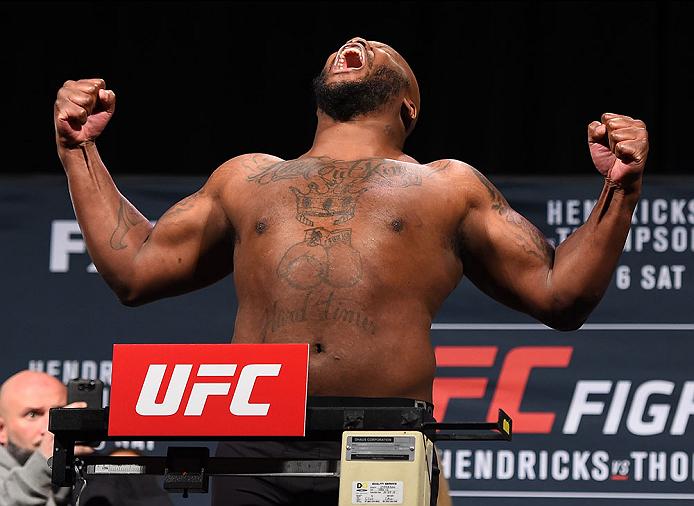 Gonzaga stopped a three-fight skid in his last bout against Konstantin Erokhin, but the Brazilian has a tall task in front of him in Lewis. Both guys will be happy to stand and trade, but if the fight hits the mat Lewis will find himself in Gonzaga’s world.

Staying at heavyweight, one of the biggest stories of late 2015 was the emergence of Francis Ngannou at Fight Night Orlando. The Cameroon product KO’d Luis Henrique in destructive fashion to announce his arrival in a division starved for new blood.

Ngannou (6-1) will welcome undefeated Curtis Blaydes (5-0) to the UFC and will be looking to add another big finish as he continues to climb the ranks.

The undefeated Nicolas Dalby (14-0-1) is coming off a memorable fight against fellow prospect Darren Till at Fight Night Dublin last October. The two fought to a draw but the bout was awarded Fight of the Night honors.

Dalby, arguably the best pound-for-pound fighter in Denmark, can take a beating and hand one out. He has excellent cardio and proved it against Till.

He faces Zak Cummings who has won three times in four UFC outings. Cummings is well-rounded and is coming off a first-round KO against Dominique Steele.

Dalby is like a whirlwind inside the Octagon. He brings the pace and aggression, and Cummings is going to be a great test for the rising welterweight.

Rob Whiteford takes on Lucas Martins in the main event of the UFC FIGHT PASS prelims.

Both fighters have recorded a recent loss to Darren Elkins and will be looking to pull out all the stops to get back in the win column.

Look for fireworks from both guys who like to trade. Whiteford and Martins have 18 KOs between them and like to get after it early.