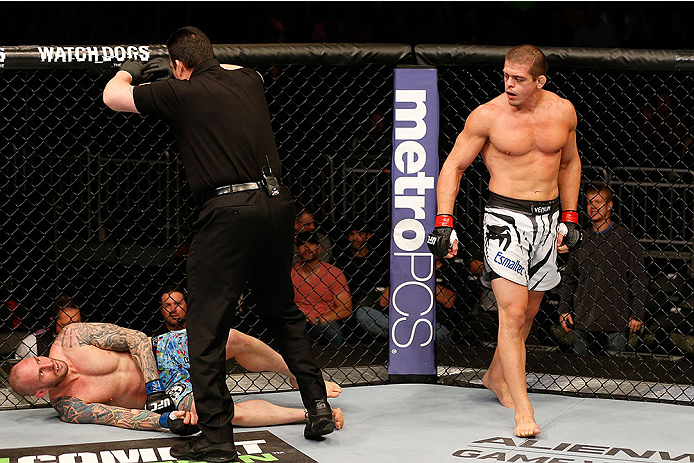 A huge slate of up and comers and veterans decorate the upcoming UFC Fight Night card in Uberlandia, Brazil, including two former Ultimate Fighter Latin America hopefuls looking for a second shot inside the Octagon.

Diego Rivas - previously of Team Werdum on the show - is an undefeated prospect who looks to put Chilean MMA on the map when he takes on Mexican featherweight Rodolfo Rubio.

Also on the preliminary card, Caio Magalhaes will try to repeat his last knockout performance when he takes on American fighter Trevor Smith, while Charlie Brenneman hopes to erase the memory of two tough losses in a row when he faces Leandro Silva.

In today's fantasy preview, we're going to look at Saturday’s preliminary card and see what key matchups might make the difference between winning and losing in the UFC Pick Em game.

Diego Rivas had his dream of becoming The Ultimate Fighter end early in the competition this season when he was tapped out by Mexican fighter Gabriel Benitez in the second round of their bout in the tournament.  Now the fighter hailing from Chile will look to make a more impressive showing when he fights former housemate Rodolfo Rubio this weekend in Brazil.

Rubio was a strong favorite to potentially make it to the finals based on his overall skill set and experience level.  With 18 professional fights on his record, Rubio was one of the most seasoned veterans on the show, but he froze up a bit in his semifinal round matchup against teammate Yair Rodriguez.  Rubio just didn't look like himself taking on another member of Team Velasquez, but going into his fight against Rivas, he should be more than ready to showcase his skills.

Rubio is a very dangerous submission fighter with a complete arsenal of attacks on the ground.  He's got a nasty heel hook and triangle choke as well as a rear naked choke, which appears to be his favorite submission.  Rubio has a strong enough striking game to not get overwhelmed on the feet, but he's going to want to drag this one to the ground.

Rivas is no stranger to fighting on the mat, but as showcased in his loss on the show it's also not his best area either.  Considering the stage for this fight, with thousands of Brazilians cheering in the arena, Rivas may feel a bit like a deer in headlights, especially if Rubio gets him to the ground early.  If Rubio secures a takedown in the opening moments of the fight, he could very well lock up a submission and send Rivas back to the drawing board one more time.

Prediction: Rodolfo Rubio by submission, Round 1

Magalhaes started his UFC career with a bump in the road, but since losing in his debut he's reeled off three victories in a row, with each performance more impressive than the last.  This Brazilian has some of the best training in the world, splitting his time between American Top Team in the United States and working with Nova Uniao in Brazil, where he learns alongside names like Jose Aldo and Renan Barao every day.

Smith is a solid, all-around fighter who tends to have an awful lot of close fights. He rarely wins in a way that doesn't leave at least a few questions after it's over if he couldn't have done more to make a decision more decisive.  Smith has shown good striking in his UFC career, landing over three and a half strikes per minute with 62.54 percent accuracy.  What hurts him in this fight are his defensive woes.  Smith only blocks just over 43 percent of the strikes attempted against him, and taking on a heavy hitter like Magalhaes, it just doesn't bode well for the outcome.

Magalhaes has a tendency to keep things exciting although he's shown a struggle with cardio in the past.  If he comes out the gate quick, he might be able to put Smith away before the fight drags into the third round. Smith has enough experience to stay out of too many bad spots, but if he gets cracked a few good times in the opening stanza it may not matter how much better he does by the time the final minutes are ticking away on the clock.

It might be do or die for these two UFC veterans when Leandro Silva takes on Charlie Brenneman.

Silva has tasted a lot of success outside of the UFC.  He's picked up 11 wins with a slew of finishes, looking very impressive along the way.  The only problem is that his two career losses have both come in the UFC against the best talent on his resume.  He fell to Ildemar Alcantara in his debut and then to Francisco Trinaldo in his last fight.  Silva is a better fighter than what he's shown, but if he doesn't prove it in this bout he may not get another chance.

The same could be said for Brenneman, who made his way back to the UFC once already after suffering some tough losses while competing as a welterweight.  Now Brenneman is a lightweight, but thus far in his return to the Octagon he's gone 0-2 with one loss by knockout and the other by submission.  At one time, Brenneman was one of the best stories in all of MMA after taking a bout against Rick Story on 24 hours’ notice and pulling off the win while performing in front of his home state crowd in Pennsylvania.  He's going to need to gather that kind of momentum again to win on Saturday in Brazil.

Silva is a tough fighter to gauge because he's looked so good in winning and hasn't shown up nearly as much in defeat. Still, fighting in Brazil against an American he'll have the crowd on his side and it should give him the necessary push to get the job done against Brenneman. It also can't be discounted that Brenneman is traveling an awfully long way, and with the pressure ratcheted up in this fight, the anxiety might get to him by the time he steps into the Octagon.