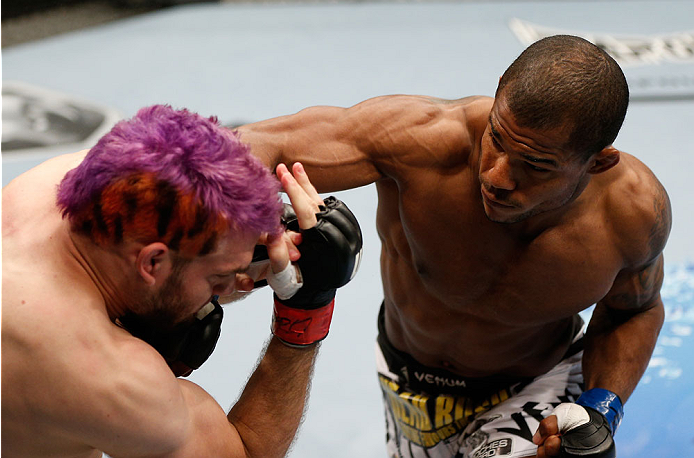 The UFC Fight Night: Henderson vs. Dos Anjos card offers up a slew of main card bouts worth watching, but the preliminary bouts also feature a list of top up and comers, including the welterweight bout in the main prelim slot as former Ultimate Fighter competitor Neil Magny takes on Alex Garcia.

In addition to Magny vs. Garcia, submission specialist Beneil Dariush looks to bounce back from a recent loss as he takes on Tony Martin in a lightweight battle, while UFC favorite Ben Saunders returns to the promotion for the first time in several years as he welcomes newcomer Chris Heatherly to the Octagon.

The latest fantasy preview will examine the fights from the preliminary card as the UFC returns to Tulsa, Oklahoma with some intriguing and close matchups to watch on Saturday night.

Heavily-hyped prospect Alex Garcia makes his third appearance in the UFC following wins over Ben Wall and Sean Spencer during his brief time with the promotion.  Garcia trains out of the Tristar Gym in Montreal, where he works with fighters such as Rory MacDonald and occasionally former UFC welterweight champion Georges St-Pierre as well.

Garcia is a very strong fighter for the welterweight division and he showcases that with his tremendous power whenever he gets inside on an opponent.  Garcia swings big with punches, but oftentimes misses out on the opportunity to put together combinations, which could hurt him as he gets into the deeper end of the division.  While his striking is far from polished, Garcia makes up for it with sheer force, as he can overwhelm opponents before they ever get the chance to figure out he's not a technical wizard on the feet.  Garcia also possesses a dominant wrestling game, and through two fights in the UFC he's averaging over seven takedowns per 15 minutes.  He's also had nearly a 73 percent success rate, although the numbers are askew considering he's only had 15:43 inside the Octagon.

Where Garcia could struggle in his upcoming fight is dealing with the long range of Neil Magny, who will have a nine-inch reach advantage in their bout.

Magny is a long, lean fighter for welterweight and he's finally starting to understand how to use that incredible reach to his advantage while also fighting smart along the way.  Magny has come into his own lately by winning three fights in a row, including a TKO victory in his last fight.  Magny isn't going to blow anybody away with his skill set in any one area of MMA, but he's got more than a few tools in his arsenal to give Garcia headaches.

This fight really comes down to who controls the distance.  If Magny can keep Garcia on the outside and at the end of his punches, he can easily cruise to a decision victory.  Garcia, on the other hand, needs to get inside and either drag this one to the mat or dig to Magny's body time after time until he wears him down over three rounds.

The smart money sits on Garcia because of his ability to get the takedowns, but he's not a safe pick by any means.  If he fails to get inside on Magny early, he could end up chasing him and catching counter strikes for 15 minutes until the fight is over and he has a loss on his record.

Submission specialist Beneil Dariush and his opponent Tony Martin each tasted defeat for the first time in their respective careers in their previous fights and now they look for redemption on the undercard in Tulsa.

Dariush comes into this fight with the same strengths and weaknesses as his last fight, but the key is whether or not he addressed those shortcomings enough to overcome them.  Dariush is a high-level grappler with slick submissions that can come from anywhere at any time.  He's not afraid to get close and engage, which is what cost him in his last fight against Ramsey Nijem, but it's also the same kind of brazen attack that led to his first UFC win as well.

Martin is more of a wrestler with explosive strength from the outside.  He's a natural athlete who has won most of his fights with a submission-heavy attack, and that could be the kryptonite that backfires on Martin in this matchup.

Martin's natural instinct is to take a fight to the mat and the same can be said for Dariush. Both fighters are proficient enough in their stand-up to pull off some solid combinations or even a one-punch knockout, but neither will win any awards for best striker of the year.  That means this fight will likely at some point hit the mat and there it's a mismatch in favor of Dariush.

While he may not possess the raw strength of Martin, Dariush more than makes up for it with a disciplined Brazilian Jiu-Jitsu game and flawless technique.  This fight may stay standing for a round depending on how much each fighter wants to engage to open things up, but once the action goes to the ground, look for Dariush to get ultra-aggressive until he catches Martin slipping, if only for a second, because that's all it takes for his arms or legs to wrap up a limb or a choke and that will force the tap and the finish.

Ben Saunders returns to the Octagon this weekend for the first time in four years and he's got a favorable matchup this weekend in Tulsa.

Chris Heatherly is a newcomer with a solid record against some name opponents, but he's walking into this fight giving up a huge reach advantage, taking on a fighter who loves to use his long arms, legs and particularly knees to give his opponents nightmares.

Heatherly, at 5'9", is a good submission fighter with solid power, but in reality he's probably a lightweight masquerading as a welterweight.  Saunders, however, is a true 170-pounder and he's got the kind of striking that will give Heatherly problems from the start until the finish of this fight.  Saunders uses his long punches to pop shot opponents until they rush forward, and once he has them in the clinch he opens up with a barrage of knee and elbow strikes.  While he's not as strong with his technique, think of the same style of attack that Matt Brown uses to bludgeon opponents with until they fall over.

Saunders just needs to avoid the takedown and he should be able to crack Heatherly with a punch or a knee sometime between the first or second round to get a knockout victory and a real welcome back to the UFC.

Newcomer Joby Sanchez will debut this weekend against crafty veteran Wilson Reis in a fight that came together just over a week ago due to injuries that forced a change in the matchup.  Sanchez is fresh of a TKO win over former WEC contender Antonio Banuelos and he trains out of the Greg Jackson/Mike Winkeljohn gym in New Mexico with a lot of fighters from the team confident that he could be a star in the UFC.

Sanchez has an interesting mix of striking and ground skills with a good bottom game when it comes to his jiu-jitsu, as well as developing power in both hands. Sanchez has won the majority of his fights via submission, but lately he's found a way to get a couple of knockouts as well, which he'll need if he plans to survive this fight with Wilson Reis.

Reis will enter his third UFC fight after a bit of a career rejuvenation of sorts.  A few years ago, Reis was a top prospect just like Sanchez with a dangerous ground game and knockout power in his hands, but eventually the competition caught up to him and the Brazilian suffered a few tough losses during a very busy stretch in his career.  The talent is still there for Reis, however, and he proved it when he debuted in the UFC with a win over Ivan Menjivar before losing a very close decision to Iuri Alcantara in his last fight.

Reis could be a real contender at 125 pounds if he can put the right kind of win streak together.  This is the same fighter who has wins over several UFC names including Bryan Caraway and Zach Makovsky.  Reis has one of the best submission games you'll find in the division, with his takedowns currently sitting at 3.5 per every 15 minutes in the cage, so it's not so much a matter of if he gets the fight to the mat, but when.

It's there that Reis can take advantage of Sanchez's inexperience in the Octagon.  He may not pull off the submission, although it's very possible he does, but he'll frustrate Sanchez and watch those first-time UFC jitters eat away at his insides over the course of three rounds.  In either scenario, Reis ends up as the winner of the fight.