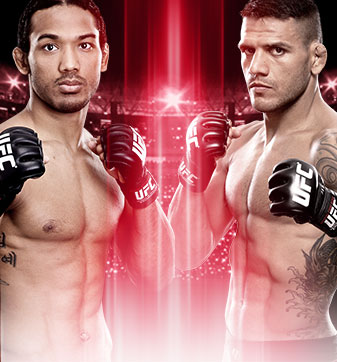 Former UFC lightweight champion Benson Henderson has been flawless since dropping the title last year to Anthony Pettis and there's no way to get back to another shot at the belt than to keep putting on performances like he has.  He'll get the chance to get another win over a top 10 opponent when he faces Brazilian Rafael Dos Anjos this weekend as the UFC makes its return to Tulsa, Oklahoma for the first time since 1994 with a stacked UFC Fight Night card airing on FOX Sports 1.

In addition to Henderson vs. Dos Anjos at the top of the card, veteran fighter Mike Pyle looks to pick up his second win in a row and sixth win out of his last seven when he takes on powerful striker Jordan Mein.  The two welterweights both had different opponents up until about two weeks ago, but now they are facing each other in the co-main event of the evening in what promises to be a very intriguing welterweight showdown.

In today's fantasy preview we are going to look at a few of the key matchups on the UFC Fight Night main card from Tulsa including the main and co-main events of the evening. Who has the edge? Who will get the finish? And is there an upset brewing somewhere on this six-fight main card? Let's find out.

Since losing the lightweight title last year to Anthony Pettis, former champion Benson Henderson has been on a mission to get back to the top of the division, and if his recent performances are any indicator, he's hungrier than ever before.

Henderson fought to a close five-round decision win against Josh Thomson in January, but then came out like a ball of fire in his next fight, taking out Russian prospect Rustam Khabilov in June, finishing the fight by submission to win his second bout in a row.  Henderson is an impossibly tough matchup for anybody at 155 pounds because he's not great in any one area, but he's really good in all of them.  Henderson is an experienced wrestler who puts opponents on their backs with 56.5 percent accuracy, which is an incredible rate considering he has landed 26 takedowns in his UFC career.

Henderson is also a very active striker, where he outlands opponents two to one overall, and he only absorbs 1.51 strikes per minute, which is the fifth-best rate in lightweight history. Add in a slick submission game and Henderson might just be the most well-rounded fighter in the entire division.

Rafael Dos Anjos will definitely be a tough test for the former champion with his heavy hands, dangerous leg kicks and high-level jiu-jitsu if he drags this fight to the mat.  Prior to his loss to Khabib Nurmagomedov, Dos Anjos looked like he was a brand new fighter over the last couple years, picking up some key wins in the division, including his signature bout against Donald “Cowboy” Cerrone, where the Brazilian outstruck and outlanded the always dangerous lightweight fighter from New Mexico.

Where Dos Anjos struggled in the fight with Nurmagomedov could give an indicator where Henderson will want to take this one when they get into the Octagon together in Tulsa.  Dos Anjos is a proficient takedown artist in his own right, but when he simply could not stave off the Russian's offensive attacks, he was at a loss to provide any kind of counter.  If Henderson can employ the same kind of game plan, Dos Anjos could be in trouble.

Henderson is tenacious and works well in the clinch, the exact place where Dos Anjos had nightmares against Nurmagomedov.  Look for the former lightweight champion to establish his kicks early and then work to get inside on Dos Anjos before working him against the cage with strikes and takedowns.  Dos Anjos doesn't have the gas tank to give Henderson serious problems past round three most likely, so once the fight gets into those “championship” rounds, the former lightweight king will really take over.  Henderson should cruise to a unanimous decision win or even possibly put this fight away late with a submission, but given Dos Anjos’ long history with Brazilian Jiu-Jitsu he should be able to survive even if he’s sucking wind in the 25th minute.

When Jordan Mein came to the UFC via Strikeforce, this young Canadian prospect had Fight of the Night winner written all over him.  A deadly striker with knockout power in both hands and both feet, Mein is creative in the way he attacks opponents, and when he lands, he's looking to put somebody to sleep each and every time.

Mein strikes with volume (nearly four significant strikes landed per minute) and he's accurate (just under 44 percent), while blocking nearly 72 percent of the strikes landed against him.  Now his last performance inside the Octagon was definitely not his best, but the mark of a true warrior is being able to have an off night and still get a win, which he did.

Mike Pyle is definitely going to give Mein everything he can handle in this fight, however, because the crafty veteran has been around the block and back again and knows every trick in the book.  Pyle was mainly known as a submission artist for a big chunk of an MMA career that spans back more than a decade.  In his most recent fights, Pyle has picked up his striking as well, finishing four of his last five wins by knockout or TKO.  His confidence in striking could be his undoing in this matchup unfortunately.

Mein lands with more power and has a varied attack of strikes at his disposal.  He only needs one good combination to land and that will be all she wrote for Pyle.  Given his last performance, Mein is probably out to prove something as well and this is a co-main event showcase that will get him plenty of eyeballs.  A Performance of the Night bonus for a vicious knockout certainly wouldn't hurt matters much either, and Mein definitely has the kind of ability to pull that off in this fight.

Throughout his UFC career, Francis Carmont has shown flashes of brilliance before tarnishing his reputation with a few lackluster performances.  The kickboxer out of France almost always has former UFC welterweight champion Georges St-Pierre in his corner shouting out instructions, but it's unclear if Carmont is listening or not because he has all the raw, athletic gifts to be a legitimate top 10 middleweight.

Carmont is a long striker with a 75-inch reach who lands his strikes with 42 percent accuracy and has some very nasty kicks in his arsenal. The Frenchman also has a solid ground game, as he's taken more than a few opponents to the mat to wear them out over the course of the fight.  He was undefeated in the UFC before losing back-to-back fights to Ronaldo “Jacare” Souza and CB Dollaway, and this is the time where he proves if he's an elite 185-pound fighter or just another guy on the roster.

Thales Leites will help prove that as well, because the former middleweight title contender has found new life since returning to the UFC last year.  He's looked better than ever with wins over Tom Watson and Ed Herman, and he picked up a knockout in his last bout over Trevor Smith.  The veteran fighter is a Brazilian Jiu-Jitsu ace with a striking game that's still unrefined, but effective.

Leites has started to get more comfortable on the feet lately, but that could be a hindrance against a kickboxer like Carmont if he's not careful.  Leites averages nearly three takedowns per 15 minutes, but his opponent stuffs attempts with 73 percent accuracy, and that number went down after taking on two very good wrestlers in Souza and Dollaway in his last two fights.

Carmont fights best when he gets fired up, so hopefully he can find the motivation to start launching kicks at Leites as soon as the fight gets started.  He has to worry about the takedown if he's tossing too many kicks because the Brazilian can certainly take this fight to the ground and finish things rather quickly.  Still, if Carmont can go three hard rounds with Souza and not get submitted, it's unlikely Leites will find an opening he could not.

Carmont should be able to use his speed and power to put a hurting on Leites over all three rounds and win a decision.  He still has the ability to be something special, but at some point Carmont has to let his hands go and take a few chances.  This may not be the fight where it happens because he definitely does not want to drop his third bout in a row, but Carmont has the kind of ability to finish a fighter like Leites; it's just not likely to happen in this scenario.