Who were the winners at UFC Fight Night: Teixeira vs Evans? Click below to get the results for all the fights at Amelie Arena in Tampa, Florida on Saturday, April 16, 2016.

Evans vs Teixeira | Torres vs Namajunas | Horcher vs Nurmagomedov | Dias vs Swanson | Chiesa vs Dariush | Pennington vs Correia | Ponzinibbio vs McGee | Graves vs Brown | Gamburyan vs Dodson | Ferreira vs Bamgbose | Akhmedov vs Zaleski dos Santos
UFC Fight Night: Teixeira vs Evans main card
Glover Teixeira defeats Rashad Evans
Teixeira def. Evans by first round KO. Teixeira pressured and pushed the pace early. A left hook by the Brazilian stunned and knocked Evans to his knees. Teixeira followed with a right uppercut to finish the fight in the opening round.

Rose Namajunas defeats Tecia Torres
Namajunas def. Torres by unanimous decision (29-28, 29-28, 29-28). No touch of the gloves for the former Ultimate Fighter teammates. Both fighters acted patient and calculated in the opening minutes. Torres starts the action by landing a couple of flurries before the round ends with a Namajunas takedown. Big Namajunas jab to open the second gives her visible confidence. It was the first of a couple big scores for Namajunas in Round 2, before the two ended with a big flurry to close. The pace slows in the third with Namajunas finishing the fight's final 30 seconds in top position and ultimately earns a unanimous decision victory.

They said it:
Rose Namajunas: “I am speechless. This has been the toughest fight I have had. There were a lot of times I felt like quitting and pulling out. I am really happy. I didn’t focus too much on the fact that I had fought her before, I wanted to leave it in the past. I have a lot of respect for her and this for me means my early birthday present.”
Tecia Torres: “My pride a little hurt but I will be fine. I wish I would have been more aggressive. Thank you to my fans for all your support and next time I promise to come back stronger.” 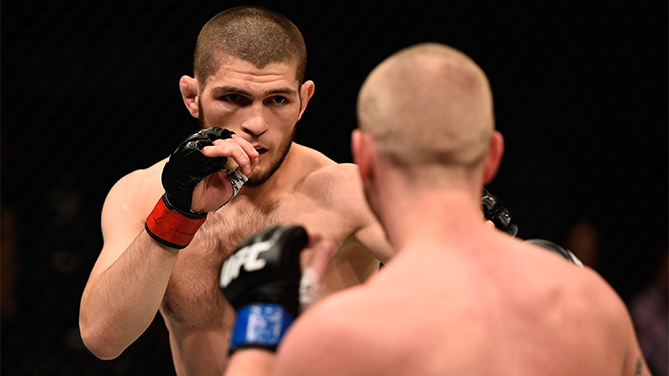 Nurmagomedov def. Horcher by TKO in second round. Nurmagomedov got into his groove midway through the first, lifting Horcher over his head before slamming him to the ground. Nurmagomedov's elbows dominated the rest of the opening round. Horcher ends up on his back, with Nurmagomedov scoring another takedown with ease. The finish came minutes later after Nurmagomedov put on ground-and-pound clinic.

They said it:
Khabib Nurmagomedov: “I feel very happy. Thank you to my team for their support. I have a lot of respect for Darrell, especially after accepting this fight with such short notice. I am undefeated and it feels great to be back, I feel free. I make weight, I enter the octagon and I fight. This is MMA and I want to fight for the title next.”
Darrell Horcher: “I wish I would have had more time to prepare. I felt I couldn’t do much. Wait till you see me after camp, you haven’t seen anything yet.”

Cub Swanson defeats Hacran Dias
Swanson def. Dias by unanimous decision (29-28, 29-28, 29-28). With the two fighters spending most of the time play patient and feeling each other out, the first round saw Dias connect on a couple counters and powerful leg kicks. Swanson knocks down Dias early in Round 2 with a sweeping leg kick and pounces on top for some ground-and-pound. Dias survived. The fight's biggest moment came in the third with Swanson landing a high leg kick, knocking Dias to the floor, and throwing flurries from top position the rest of the way.

They said it:
Cub Swanson: “I feel overwhelmed. I put so much pressure on myself to win big that I felt sick all week. It was humbling to come back after a year. The game has kept evolving and my plan was to go back to the basics. First round was about keeping it simple, second and third rounds were about getting creative.”
Hacran Dias: “I was not able to bring my game and take him to the ground as planned. I trained hard for this fight but he is very tough and experienced and I couldn’t find the right timing. Cub moved very fast making it very difficult to control him. I was counting on this victory to go up in the rankings but today was not my day.”

UFC Fight Night: Teixeira vs Evans FOX prelims
Michael Chiesa defeats Beneil Dariush
Chiesa def. Dariush by submission (rear naked choke) in second round. Dariush connects with multiple over hand lefts early in Round 1 but Chiesa smiles it off. Chiesa took down Dariush in the second and took his back, looking for a rear naked choke. On the third attempt Chiesa officially earned the sub and handed Dariush just his second UFC loss.

They said it:
Michael Chiesa: “This win feels amazing. This is a fight that I asked for so I definitely had something to prove. It was really important for me to win and keeping moving through my journey to success. I want to be champion.”

Raquel Pennington defeats Bethe Correia
Raquel Pennington def. Bethe Correia by split decision (29-28, 28-29, 29-28). While Pennington controlled the Octagon, Correia proved to be the bigger aggressor (32-13 strikes) in the opening round. Both fighters go to the corner bruised after exchanging on their feet for all five minutes. Much of the same in the second, though Pennington's control paid off as she delivered shots that got the crowd on its feet in the final moments. Pennington's attack and Correia's countering continued for all of the third, with Pennington prevailing in a split decision win. Pennington is now tied for fourth for most wins in the division’s history.

They said it:
Raquel Pennington: “That was a three-round war. We just went after it. At the end of the day I did what I had to do to win rounds. I expected her to come out very aggressive like her past fights, but when I saw she was standoffish I needed to push the pace and move forward. The goal was to get the win and move up the rankings. I want the winner of the Cat Zingano/Juliana Pena next.”
Bethe Correia: “I trained my wrestling a lot and I was able to control her in the fence. I think I did a good job but looks like it was not enough. I think I dominated the fight, but I shouldn’t have left on the judges hands. I’ll go back home and train more for my next battle.”

Michael Graves defeats Randy Brown
Graves def. Brown in Round 2 by submission (rear naked choke). Graves catches a Brown leg kick on his way up from the ground and earns his first takedown in Round 1. Graves scores another single-leg takedown early in the second and eventually submits Brown to improve to 2-0 in the UFC.

They said it:
Michael Graves: “Win or lose nothing is going to change for me. I still felt a little sluggish in there, things were not happening the way I wanted them to. Its business as usual come Monday morning, I am going to take a couple days off and enjoy my time with my family and then get back to work as soon as I can. I want to get on the July card. Everyone gets jitters when they get in there, if I was able to fight more often things would start clicking the way I want them to.”
Randy Brown: “Graves was better tonight, there are some things I need to work on. I waited too long, it’s all part of the game. I will be back. I am a better and more complete fighter. Tonight he was better, next time I will be.” 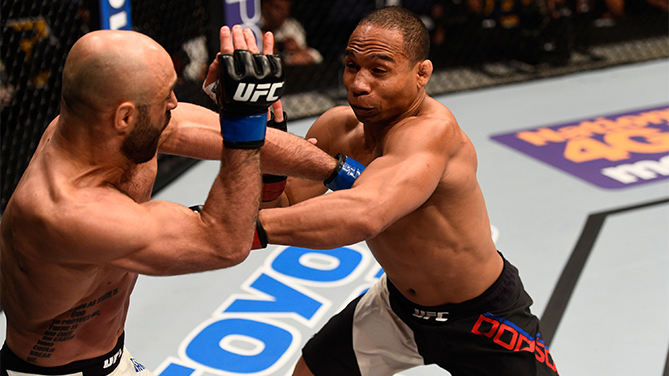 Dodson def. Gamburyan by 1st round TKO. Dodson stuns Gamburyan with a straight left and delivers a flurry of lefts to earn a TKO stoppage just 36 seconds into Round 1. It was Dodson's return to the bantamweight division after winning The Ultimate Fighter Season 14 as 135-pounder.

They said it:
John Dodson: “Fight felt amazing. I am more excited about being at bantamweight as I can see the potential of what I can become. I already beat him and excited for what is next.”

Cezar Ferreira defeats Oluwale Bamgbose
Ferreira def. Bamgbose by unanimous decision (29-28, 29-28, 29-27). High intensity from both fighters early. Bamgbose counters a high leg kick and knocks down Ferreira, followed by some ground-and-pound that Ferreira survives. Then Ferreira had a monstrous take down makes the first round tough to score. Ferreira lands another takedown in the second and bruises Bamgbose with constant elbows from top position for most of the round. Ferreira gains top position again in the third and takes control of a fatigued Bamgbose to earn a unanimous decision win. 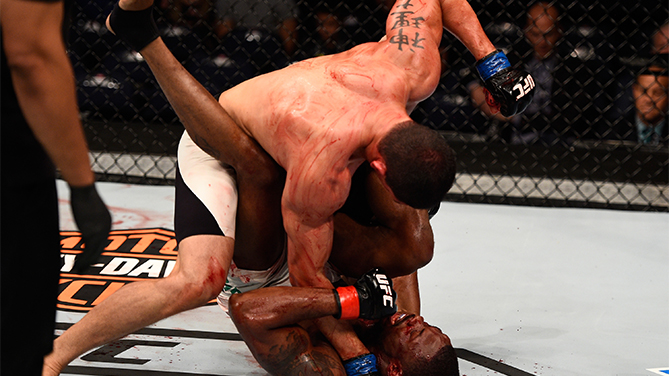 They said it:
Cezar Ferreira: “At first I couldn't figure out the fight but I trained hard in my gym and learned how to wait for the right moment to attack. So I kept myself focused, recovered from the first round and gave my best to win the fight. I was able to get into his head.” 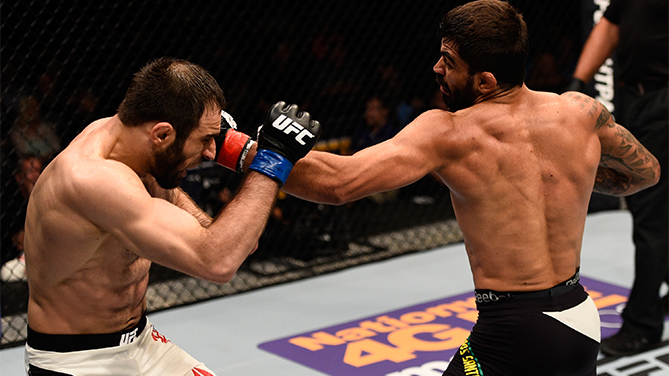 Submission attempts by both fighters fall short in the opening round without much action the remaining first five minutes. Akhmedov survives a brief knockdown in the second, avoids multiple leg lock attempts from Zaleski dos Santos, and later connects with a spinning back fist. Zaleski dos Santos corners Akhmedov against the fence, does damage and later finishes Akhmedov with a multiple knees for his first UFC victory.

They said it:
Elizeu Zaleski Dos Santos: “This is just the beginning of my legacy in the UFC. I was really calm during the first 2 rounds because I knew I could finish the fight with my ground game. There was nothing in his game that could surprise me.”
Omari Akhmedov: “I really wanted to win the fight. I gave it my all.”