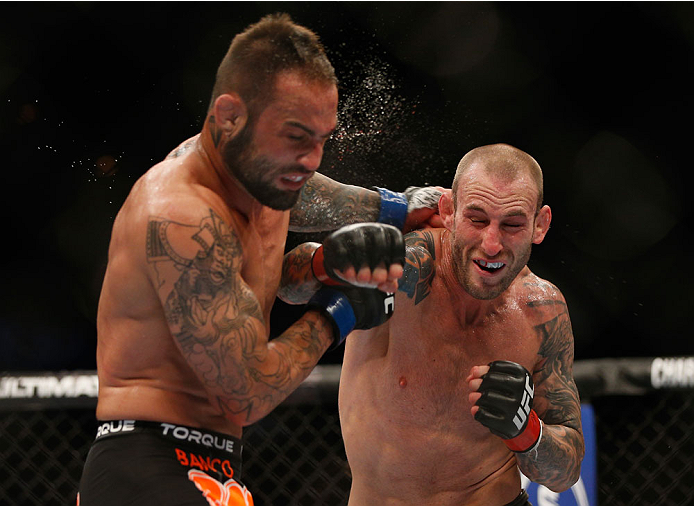 The UFC's return to Australia this Friday (Saturday in Sydney) will be met with an undercard filled with local talent, including former TUF Nations competitor Jake Matthews in the featured bout against returning lightweight Vagner Rocha.

Matthews showed in his UFC debut that he's extremely gifted when it comes to his physical attributes, and with his young age, there's plenty of room to grow for this Australian.

Also on the undercard, Anthony Perosh looks to delight the Australian crowd when he returns to action against former heavyweight Guto Inocente, who moves down to 205 pounds for his second appearance in the Octagon.

In today's fantasy preview, we'll take a look at a few of the key fights on the undercard for UFC Fight Night: Rockhold vs. Bisping.

Matthews is a well-rounded fighter, best known for his grappling and power in the Octagon.  He's a very strong lightweight and showed in his debut against Dashon Johnson that he's good everywhere.  He landed almost five strikes per minute with 70 percent accuracy.  He stuffed every takedown attempted against him and put his opponent down over and over again before finally finishing it with a submission.

He'll have to be careful with Rocha, who is a real veteran of the sport and not somebody he should overlook at all. Rocha is a second-degree black belt in Brazilian Jiu-Jitsu and he isn't going to be intimidated taking on Matthews in his backyard after facing a fighter like Donald “Cowboy” Cerrone in his UFC debut back in 2011.  Rocha has now won four fights in a row and his confidence has to be brimming going into this fight.

Matthews is definitely going to be the better athlete and he'll need to use that against Rocha to win this fight.  He's quicker and stronger than the Brazilian, but the last thing he can do is get complacent.  If he leaves his legs out for a takedown or gets stuck in Rocha's guard, he could be in trouble in a hurry.  While his takedown defense was flawless in his UFC debut, Matthews struggled mightily against a good wrestler when he was fighting at welterweight on The Ultimate Fighter.  He definitely does not want to be stuck on the ground for long against someone like Rocha.  It helps him that Rocha has been out of action for over a year at this point, so ring rust is a real factor in this one.

It's tempting to pick the upset here because Rocha definitely has the skill set to slip something through Matthews' defense and pull off a submission victory.  That said, with all the time off he's had plus the long travel to Australia, there's just too many unknowns to make the pick.

One of the top prospects out of the Blackzilians gym in Florida will make his light heavyweight debut in the UFC as Guto Inocente takes on submission wizard Anthony Perosh.

Inocente has long been talked about by a slew of his teammates, including former UFC light heavyweight champion Rashad Evans.  Inocente is a tough combination of Brazilian Jiu-Jitsu and kickboxing.  Rumors floated around that Inocente even got the better of bigger heavyweight Alistair Overeem during some of their sparring sessions. Inocente is fast on his feet and lands strikes at a rapid pace.  While his first UFC fight was a tough knockout loss, Inocente now moves back down to 205 pounds, where he really belonged in the first place.

Facing Inocente is Australian grappler Anthony Perosh, who fights for the first time since suffering a devastating, one-sided loss to Ryan Bader in his last trip to the Octagon.  Perosh is a noted grappler with long arms and deceptive submission skills.  He's capable of knocking opponents out as well - he finished former Ultimate Fighter finalist Vinny Magalhaes in just 14 seconds, earning a well-deserved Knockout of the Night bonus.

To have any chance of winning this fight, Perosh needs to get Inocente to the ground.  While he's capable of landing a knockout punch, that's not a game he wants to play with the Brazilian.  Inocente is quicker, hits harder and won't let up until he finishes the fight.  Perosh seems to find a way to make his opponents look bad with his stifling ground game and submission attacks, but getting this one to the mat might be the biggest problem.

Inocente has good takedown defense and has worked with top-level wrestlers at his camp to make sure he's able to keep fights standing.  Assuming Inocente blocks Perosh when he tries to get the takedown, he can then unload on his feet with impunity.

Prediction: Guto Inocente by KO, Round 2

Richie Vaculik got a switch of opponents recently after Neil Seery was forced to withdraw from their fight, with ultra tough Hawaiian fighter Louis Smolka stepping in.

Smolka is very well-rounded, with a brown belt in Judo and a background that includes karate and kickboxing. Smolka showed off his skills in his UFC debut, taking out Alptekin Ozkilic in an unexpected upset. While he fell to defeat in his follow-up bout against Chris Cariaso, it was a very close battle that ended in a split decision.  Smolka is a tall, rangy fighter with a good jab and a very reliable submission game that can come from any direction.

Vaculik has pulled off plenty of submissions as well during his career, but he's got a tall order taking on Smolka in this one.

Smolka, despite the short notice, is a hard matchup for any fighter in the top 10 of the division and he's definitely got a leg up on Vaculik in this bout.  Watch for Smolka to keep his range early and put Vaculik on the end of his punches.  Once the range is established, he can decide if he wants to dive in for a takedown or fake with his wrestling and go over the top for a knockout blow. Either way it ends badly for Vaculik

Prediction: Louis Smolka by TKO, Round 3

The best lock to hand down on the preliminary card comes from this matchup between former Ultimate Fighter hopeful Luke Zachrich against Olympic Judoka Daniel Kelly.

Kelly is making his UFC debut with a perfect 6-0 record, but he's known to many fans from his time on The Ultimate Fighter Nations, when he represented Australia against Canada.  Kelly is a strong fighter, but is still a bit unrefined in his attacks.  He's got a slew of submissions and knockouts on his record, but he remains an unknown due to the lack of talent he's faced.  It's hard to tell if Kelly is that good or the fighters he's been facing are that bad.

Zachrich, on the other hand, is a long, lean striker with a slight height and reach advantage over Kelly and he'll use it all night long. Zachrich dabbled with boxing during his down time away from MMA and it's paying off.  He peppered Guilherme Vasconcelos constantly en route to a unanimous decision win in his last fight and he can probably do the same and more to Kelly.

Kelly may have picked up some new tricks prior to this fight, but judging by past performances he's going to struggle to get Zachrich to the ground, and on the feet he just doesn't have the hands to go toe-to-toe with the Ohio native in a boxing match.