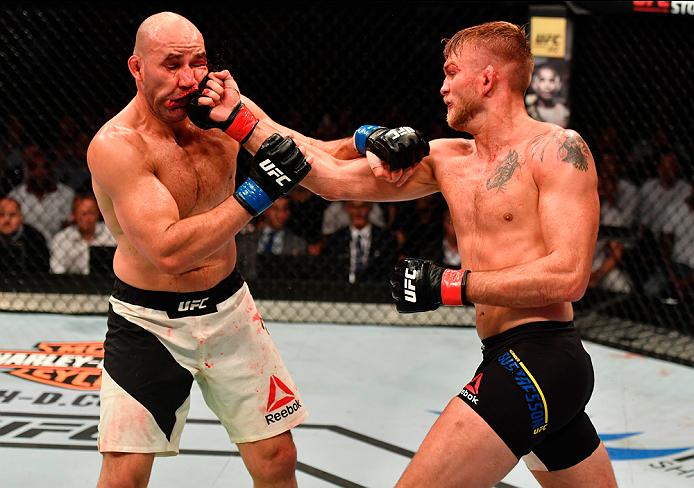 Sunday’s UFC Fight Night event is in the books, and now that the dust has settled in Stockholm, Sweden, it’s time to go to the scorecard to see who the big winners were at Ericsson Globe.

1 – Alexander Gustafsson
The last time Alexander Gustafsson fought in his hometown of Stockholm in 2015, he was stopped in a little over two minutes by Anthony “Rumble” Johnson. A little more than two years later, he left the Octagon with a career-defining win and a future bride. Now that’s a homecoming done the right way. But in all seriousness, Gustafsson has had impressive wins before. He didn’t become the number one light heavyweight contender by accident. But yesterday’s victory saw him putting his striking together like never before against a dangerous foe in Glover Teixeira, and what followed was a punishing example of just how good “The Mauler” can be when he’s confident, injury-free, and confident. And yes, I meant to list confident twice. Gustafsson fought as if he knew how good he is, and if he needed a reminder after his close, but crushing, losses to Daniel Cormier and Jon Jones, he got it. The only fight to make at 205 pounds after this summer’s Cormier-Jones rematch is Gustafsson versus the winner of that bout. Gustafsson earned it, and if you’re a fight fan, you want to see him in with either Cormier or Jones again. But can he win the crown in his third try? This version of Gustafsson will be tough to beat.

2 – Volkan Oezdemir
When I spoke to Volkan Oezdemir before his Stockholm co-main event against Misha Cirkunov, I asked him if he was insulted that people wrote him off before his first big UFC win over Ovince Saint Preux. He said he wasn’t, and that he wasn’t insulted that they felt the same way about the Cirkunov fight. He even said that most people expected him to get run over by Cirkunov. That didn’t happen. Not even close. And if a 28-second knockout of another legitimate light heavyweight contender doesn’t make those doubters into believers, they’ll never come on board. Then again, the Switzerland native probably doesn’t care. All he wants is the belt, and he may be getting his crack sooner rather than later, with a perfect scenario being Gustafsson versus the winner of Cormier-Jones 2, and the next shot going to the winner of a clash between Oezdemir and Jimi Manuwa.

3 – Peter Sobotta
Peter Sobotta has had an interesting two stints in the UFC. The first time around in 2009-10, he never seemed to kick into the next gear on fight night, and the result were three less than thrilling decision losses to Paul Taylor, James Wilks and Amir Sadollah. Now mind you, this was a guy who was 8-1 with eight finishes before his UFC debut. Then he returns to the local circuit and all five of his wins end before the final bell. He gets the call back to the UFC in 2014, and he has progressively shown those finishing instincts on the big stage, with Sunday’s knockout of Ben Saunders his most impressive to date. This was the fighter everyone in Europe was raving about for all those years, and now that he’s really here in the Octagon, the future is one every fight fan should be looking forward to.

4 – Darren Till
If Darren Till can stay injury-free and keep on the right track with his career, he’s got championship potential at 170 pounds. That’s not saying his win over Jessin Ayari was the one fight that made me say this or that he’ll be ready for the elite of the division by the end of the year. It’s just something about the Brit’s swagger, mean streak and ease in the Octagon that marks him as something special, and while he’s not a finished product yet, he showed enough glimpses of brilliance against Ayari that makes you want to see him fight again.

5 – Damir Hadzovic
There’s nothing more frightening to a fighter than being 0-2 in the UFC. That was the prospect staring at Damir Hadzovic on Sunday after two rough rounds on the ground against submission wizard Marcin Held, and while many fighters would have mailed it in at that point, Hadzovic still had the will to win entering the final five minutes. But just wanting to win isn’t enough; you have to have the skill, stamina and opportunity to get the job done, and as Held shot in and tried to secure one of his patented leg locks, a single knee from the Bosnia native ended the bout. Now he’s 1-1 and has a fresh start in a tough division where he can make some noise, and he can, because despite losing his first Octagon bout to Mairbek Taisumov and losing the first two rounds to Held yesterday, he’s exciting, he’s always looking for a finish, and he’s going to be trouble for any 155-pounder he meets.