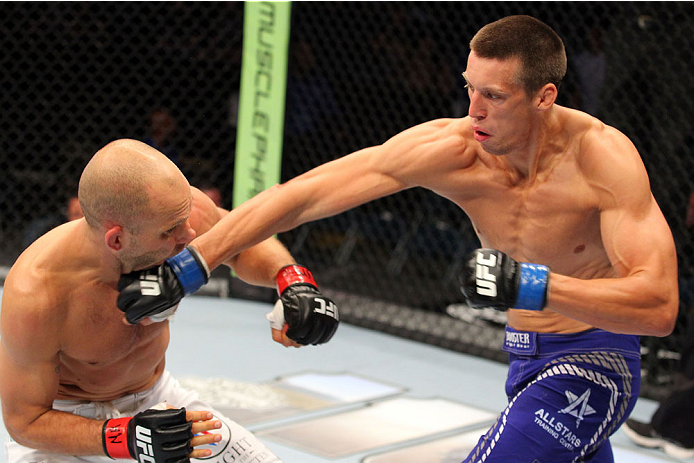 The UFC's return to Sweden this Saturday night will showcase several local fighters and some top up and comers as the preliminary bouts run deep with seven fights in total.

At the top of the card is Magnus Cedenblad taking on top-rated prospect Scott Askham, who makes his UFC debut with a perfect 12-0 record thus far in his career.  Also fighting on Saturday on the preliminary card is Nico Musoke, who takes on Alexander Yakovlev.

There are a lot of close matchups on this preliminary card, so in today's fantasy preview we'll break down a few of the key points to see who will come out on top and which fight might bring you maximum value by the time Saturday rolls around in Sweden.

An interesting battle at middleweight highlights the preliminary portion of the upcoming UFC Fight Night in Sweden card as Magnus Cedenblad looks to extend his two-fight win streak against British newcomer Scott Askham.

With an undefeated record and a good reputation from his fights in England, Askham is a fun prospect to watch, but he's still a bit of an unknown when it comes to how he'll deal with facing top talent in the UFC.  Askham is a tough clinch fighter who beats his opponents up on the inside while also employing a strong ground game as well.  He's got a slew of knockout finishes to his credit, but as the competition started to get tougher, it became much harder for him to stop fights.

He's a tough, gritty striker with better than average wrestling, especially coming out of England, which is not a country typically known for fighters who excel in taking their opponents down.

Cedenblad will present an interesting test for Askham because he's not only got three previous fights in the UFC under his belt, but he's fighting close to home with a two-fight win streak as momentum.  Cedenblad is a solid ground fighter and that's typically where he'll look to take the fight, with over two and a half takedowns on average per 15 minutes in the cage. He also lands with 60 percent accuracy, so Askham will have to be aware of the takedown and he'll soon find out if his wrestling is good or just good against other British fighters.

While Askham will likely be a popular pick this weekend because of his undefeated record and a decent amount of hype surrounding his debut, Cedenblad remains the smart pick.  He got through his Octagon jitters early and while it cost him a loss, he also gained valuable experience on how things can go wrong in a hurry when you get to the level of the UFC.  Cedenblad is tough and knows how to find a way to win, and that's probably what he'll do again when he faces Askham this weekend.

Nico Musoke will look to bounce back from his recent loss to Kelvin Gastelum while Alexander Yakovlev tries to get his first win in the UFC after an impossibly hard test in his debut against welterweight submission specialist Demian Maia.

Musoke has been a pleasant surprise coming out of Sweden after stepping up on short notice for his UFC debut.  Musoke is a purple belt in Brazilian Jiu-Jitsu who has averaged just under two and a half takedowns per fight, so he's definitely a tough competitor to deal with on the ground.  His striking isn't bad, but not nearly as polished, although he can pack a good punch. His defense could use improvement, but Musoke is still a very tough out and he sticks around for all 15 minutes.

Yakovlev will hope to have a better showing for his second trip to the Octagon after losing to Maia in a rather uneventful affair back in May.  Yakovlev is traditionally a very strong wrestler who rarely engages with his opponents standing, and instead favors a ground war with him on top or in control of the clinch.  Yakovlev sets up his takedowns very fluidly, but against a world-class grappler in Maia he struggled to even attempt taking the fight to the ground.

On paper, Yakovlev has a style that could grind Musoke down into the mat for three straight rounds to earn him a decision win. On the other side of the coin, Musoke is well-versed in wrestling and submissions himself, and definitely has an advantage on the feet.

Look for Yakovlev to shoot in on Musoke much more than he did against Maia, but the result may still be the same because the Swede has the kind of athleticism to sprawl out from the takedown and then work for an attack on the feet. He averages above one strike more per minute than his opponent and that work rate should be enough, coupled with his takedown defense, to get Musoke the win.

Dennis Siver has undergone several opponent changes since first being assigned to fight on this weekend's card in Sweden, and most recently he was switched to face undefeated newcomer Charles Rosa, who takes the fight on less than a week’s notice.

It's an unenviable task for any fighter to compete with so little preparation, but Rosa will give Siver everything he can handle and more.  Rosa trains out of American Top Team in Florida, where he routinely works with fighters like Dustin Poirier, Robbie Lawler, Hector Lombard and Jorge Masvidal.  He's a slick submission stylist who has finished every single one of his nine fights thus far in his career.

The book on Siver is well-known throughout the course of his UFC career.  He's a short, compact fighter who packs a nasty punch, a spinning back kick from hell, and a striking style that's sometimes impossibly hard to figure out.  Siver has only fallen to the best fighters he's faced in the UFC, with almost all of them currently sitting or at one time being planted firmly in the top 10.

It's here that experience trumps youth.  Siver was going to be a tough matchup for any featherweight, much less someone debuting on short notice.  Rosa might end up being a name to watch for the future, but he's facing an impossibly hard task with so little time to get ready.  Still, Rosa will make it fun and he'll certainly go after Siver with everything he's got, which will force the German striker to push the pace and look for the finish.  This one might be a sleeper for Fight of the Night if things play out how they could between these two featherweights.

Cathal Pendred will finally compete in his natural weight class this weekend as he faces Gasan Umalatov on the UFC Fight Night prelims. Pendred is a teammate of Irish badboy Conor McGregor, as well as main event fighter Gunnar Nelson.  Pendred made his way here via The Ultimate Fighter, where he fought as a middleweight, oftentimes coming in as a much smaller competitor against bigger competition.

As a welterweight, Pendred was not only a much better fighter, but a serious prospect to do damage at 170 pounds in the UFC. His statistics currently aren't all that impressive, but considering the damage he took against former roommate Mike King the last time he fought, yet still managed to gut out a win, should show the heart that this Irish fighter has inside.

Pendred is a hard striker with good power in his hands, wrestling to back up his kickboxing and an innate ability to battle out of tough positions.  There's no shame in moving your head to avoid damage, so Pendred has to improve on his defense and now is the perfect time considering Umalatov is primarily a striker who is looking for the knockout.

Pendred just needs to play his game and wait for the right opening and he'll put Umalatov away.  The key is not getting too crazy or drawn into Umalatov's power hand.  If he can avoid an all-out brawl, Pendred should look impressive and prove why he was a welterweight that deserved to be in the UFC a long time ago.