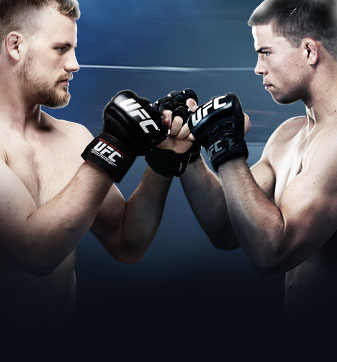 This weekend the UFC returns to Sweden with a card headlined by the biggest welterweight prospect since a guy named Georges St-Pierre debuted back in 2004. Grappling prodigy Gunnar Nelson was long talked about as a fighter that could one day develop into something pretty special, and thus far in his UFC career, he hasn't disappointed one bit.

But to take a step forward in the ultra deep UFC welterweight division, Nelson is going to have to get past his toughest test to date, as Rick Story steps up to the challenge in the five-round main event for the first of two Saturday events.

In addition to Nelson vs. Story, Sweden will also get two top-notch strikers at 145 pounds when local favorite Akira Corassani takes on Max Holloway, while Ilir Latifi looks to pick up another win inside the Octagon while fighting in his own backyard as he takes on newcomer Jan Blachowicz.

In today's fantasy preview, we're going to examine the main card from Sweden, along with our picks and predictions, to hopefully give you the leg up on the competition for this weekend's UFC Pick Em game.

While he carries an emotionless look on his face before all of his fights, Gunnar Nelson is an assassin the moment the referee says go, and he's been nothing short of impressive since making his UFC debut.  Nelson is a perfect 4-0 thus far, with three wins coming by submission, and now he's looking to climb up the welterweight rankings with a win over a real veteran in Rick Story.

What makes Nelson so good is the deadly combination he puts together of ample striking and real power on the feet coupled with one of the best Brazilian Jiu-Jitsu games in all the UFC.  Nelson got his black belt from Renzo Gracie so it's safe to say he's got the ground game locked down and now that he's also training with Irish fighters like Conor McGregor and Cathal Pendred on a regular basis he's starting to elevate his striking to the same level.  Nelson is the picture of consistency with nearly 60 percent accuracy in his strikes and over 71 percent accuracy with his takedowns.

Story will certainly test both of those weapons because he's a hard-nosed striker and wrestler with a powerful ground game of his own.  Story outlands Nelson by over a full strike per minute and on average puts opponents on the ground more than the Icelandic native as well.  It also can't be discounted how much experience plays a part because Story has fought the best of the best in the welterweight division and also holds a win over current champion Johny Hendricks.  Recently, Story even moved his training camp to Arizona to work with coach John Crouch, who also happens to have fighters like former UFC lightweight champion Benson Henderson in the MMA Lab gym.

Unfortunately, toughness and experience probably still won't be enough to put Story over the hump to defeat Nelson on Saturday.  Nelson is patient with his attacks, but the moment Story gives him an opening, he will pounce.  It may be a waiting game in the first or maybe even the second round, but when it's all said and done, Nelson should pick up his fifth win in the UFC and fourth by submission to put away Story in this main event fight.

Two powerfully strong strikers face off in the co-main event from Sweden as local favorite Akira Corassani tries to bounce back from his recent loss to Dustin Poirier when he takes on Max Holloway, who is currently riding a three-fight win streak.

Prior to the loss to Poirier, Corassani was 3-0 in the UFC and he got there by mixing up a strong kickboxing game and anti-wrestling attack to stuff takedowns thrown at him by opponents. Corassani lands a respectable 3.27 strikes per minute while stuffing takedowns at an incredible 86.67 percent rate, which means if he wants this fight to stay standing, it will stay on the feet.

The only problem is that's exactly where Holloway will want this fight and the 22-year old Hawaiian has really started to come into his own over the last year.  Holloway is still one of the youngest fighters on the UFC roster despite already having nine fights inside the Octagon.  He's the only person on the roster to take Irish upstart Conor McGregor to a decision thus far and his other losses have both come to top 10-ranked featherweights (Dustin Poirier in his short notice debut and Dennis Bermudez in a fight many scored for Holloway).

Holloway is a long fighter with a 70-inch reach, which typically gives him an advantage over his opponents and this fight is no different.  Holloway is a machine, landing 5.75 strikes per minute with over 42 percent accuracy.  He's got a stiff jab, good kicks and puts together combinations like few strikers can do at 145 pounds.

Corassani is tough as nails and is not going to be an easy fighter to put away, but Holloway can definitely mount damage round after round to pull away on the judges' scorecards.  Holloway is destined to eventually get another shot at a top 10 opponent and it's just tough luck for Corassani that he's facing the Hawaiian buzzsaw right now at this point in his career.

Ilir Latifi got to the UFC when the promotion needed a late notice replacement to take on Gegard Mousasi just days away from the scheduled show and while he came up short in that effort he proved that he could hang with the best fighters in the world inside the Octagon. Since that debut loss, Latifi has gone 2-0 with a submission win and a knockout victory in his last fight.

Latifi is called “The Sledgehammer” and the nickname is fitting, considering the way he drops his anvil-like punches against opponents, especially if he traps them in the clinch, where he can blast away from the inside.  At 5'10" Latifi is one of the shorter fighters in the division, but he has fought taller men his whole life so facing Blachowicz, who will have about four inches on him, isn't anything new.  Latifi is just a powerful fighter with the ability to trap his opponents, work his dirty boxing and hurt them to the head and to the body.

Meanwhile, Blachowicz makes his UFC debut after 20 fights in several different promotions, primarily fighting out of Europe. Blachowicz may be a UFC rookie, but he's no novice when it comes to high-level MMA.  His last four wins have come over former UFC fighters, so Blachowicz knows what it takes to beat the best of the best in the sport.  Blachowicz's biggest advantage in this fight is probably his submission game, which has yielded him seven career victories. It's just unclear how hard of a time he'll have trying to get Latifi off his base and to the mat.

Latifi is a brick house with legs, always keeping his center of gravity low and ready to block the takedown.  His own wrestling is quite good, as he likes to work from the clinch against the cage to either maul his opponent with strikes or toss them to the ground, where he continues to land his punishing blows.

Blachowicz could be a good name to keep an eye on in the future, especially with the UFC's ever expanding schedule in Europe.  That said, this is a tough stylistic matchup for his debut, with Latifi possessing far more power and Octagon experience, and chances are he's going to leave Sweden with a loss on his record.

While Gunnar Nelson will steal the label of top prospect on this card, Niklas Backstrom deserves a silver medal because he's definitely a name to watch on Saturday, as well as in the future.  Backstrom surprised just about everybody in his UFC debut, making short work of veteran fighter Tom Niinimaki by submission in the first round.

Backstrom comes from a wrestling-heavy submission style where he's constantly fishing for the finish on the ground. He's not too bad on the feet either, where he's picked up three TKO victories during his nine-fight career.  Backstrom hits hard and definitely possesses a slick and dangerous jiu-jitsu game.

His opponent, Mike Wilkinson, has his work cut out for him, especially after only fighting twice in the last three years.  Wilkinson also faces an uphill battle with his submission defense, after being caught and finished in his last fight against Rony Jason in Brazil.  Wilkinson does have fight-changing power and if he connects flush on Backstrom's chin, he could surprise everybody and get the knockout.

Otherwise, Backstrom's wrestling and submission attacks should prove to be too much for the Brit.  Backstrom is a fighter on the rise and he should continue to impress on Saturday night.