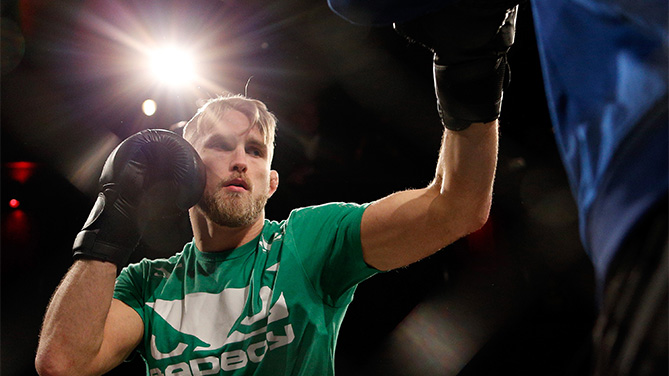 The next challenger to the UFC light heavyweight title will be determined this weekend as Alexander Gustafsson goes home to Sweden to face Anthony Johnson in a five-round main event on FOX to determine who will face Jon Jones later this year.

Gustafsson proved in his first fight with Jones that he's a machine and maybe the biggest threat the champion has ever known, but Johnson is ready to steal his spotlight by traveling to the home country of “The Mauler” and snatching the title shot away from him.

Also on Saturday's card, Dan Henderson makes his return to the middleweight division to face Gegard Mousasi in a battle at 185 pounds.  Both fighters are coming off recent losses, so a victory on Saturday is paramount if either man wants to stay in title contention in 2015.

As we gear up for another huge card this weekend, the fantasy preview will guide you through the best picks, the toughest matchups and everything in between as we break down FOX UFC Fight Night: Gustafsson vs. Johnson.

These are the fights on the upcoming FOX UFC Fight Night card that are just too close to call, but getting the correct pick will potentially separate you from the entire field when the final points are tallied at the end of the event. 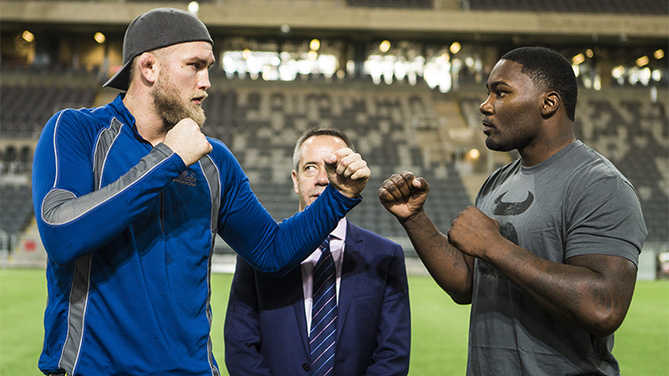 The odds are in Alexander Gustafsson's favor that he will be able to get past Anthony Johnson this weekend and punch his ticket to a rematch with light heavyweight champion Jon Jones, but is there a chance that the underdog is ready to pull off a slight upset?

Johnson has looked better than ever since coming back to the UFC as a 205-pounder.  He beat Phil Davis in every facet of the game when he returned in April 2014, taking out the former title contender with a crisp, nasty striking arsenal while countering his wrestling at every turn.  Johnson then made short work of Antonio Rogerio Nogueira, flattening the Brazilian with strikes to make a statement to the entire division that he was a legitimate threat to the title.

Johnson's striking has taken center stage in his return to the UFC, where he's delivered over three significant strikes landed per minute with 44-percent accuracy.  Combine that with 85-percent takedown defense and success with his own wrestling, where he puts opponents down over 57-percent of the time and Johnson's attacks become that much harder to predict.

Gustafsson will be his toughest test to date without a doubt.  The tall Swede presents an impossibly tough matchup for anyone at 205 pounds, including champion Jon Jones.  Gustafsson connects with the third highest striking rate of anyone in the division and has managed to amass the third most finishes at 205 pounds in the UFC as well.  While he may have less experience as a light heavyweight, Johnson equals Gustafsson in terms of overall power, but the real question becomes can he keep up the pace for five rounds?

Gustafsson has only gone 25 minutes one time in his career, but that's one more than Johnson.  As much as Johnson presents in terms of huge, knockout power, if he can't connect early then he's going to have to rely on racking up points late and that's not going to be easy to do against Gustafsson, who keeps a constant, steady pace from start to finish 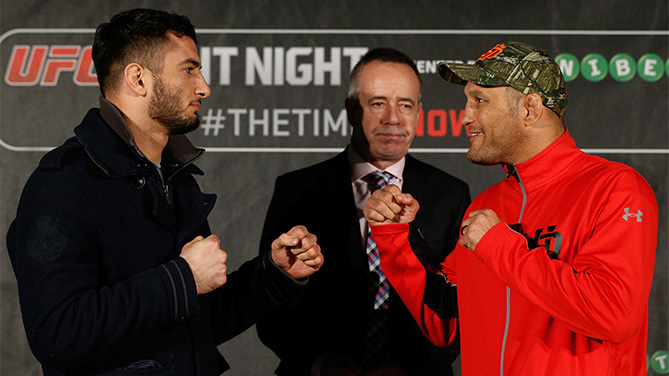 The odds in this co-main event battle are definitely in favor of Gegard Mousasi, but don't be so quick to count out Henderson in his return to middleweight.

Henderson has been one of the best two-weight class fighters the sport has ever known.  For all his accomplishments at light heavyweight, most have believed that Henderson was always better suited for a run at 185 pounds.  Who can forget Henderson flat-lining Michael Bisping at UFC 100 in his last trip to middleweight in the UFC?  Henderson is powerful and deadly, whether he's fighting at 205 or at middleweight, and his right hand can silence anybody in the division, whether it's a champion like Chris Weidman or maybe even someone like Mousasi.

The flipside of this argument is Mousasi's methodical process of stalking opponents across the cage and battering them with punch/kick combinations.  Mousasi is typically the slower fighter when he steps into the Octagon, but his ability to put together a volume of strikes as well as hit with over 50-percent accuracy makes him a tough matchup for anyone in the division.

Henderson has a chance to win in the trenches if he goes back to his heart and soul and that means wrestling.  Henderson's clinch-takedown game is maybe the best in the history of the sport (along with UFC Hall of Famer Randy Couture).  He lands with over 54-percent accuracy when he goes for a takedown, and unlike his run at 205 pounds, Henderson will have a power advantage in this fight.  He just needs to avoid a distance battle with Mousasi and Henderson can get the job done. 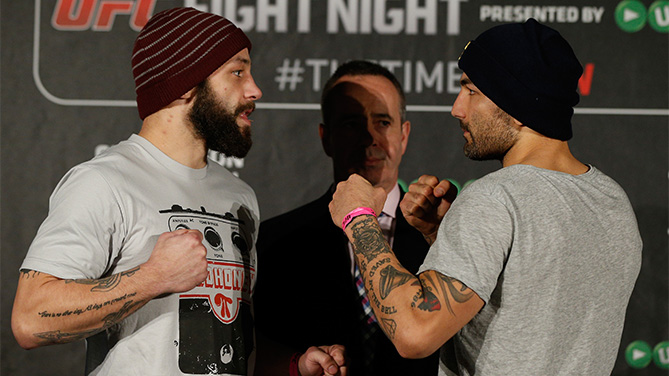 The fight to kick off the main card this weekend will be a striker's delight as former Ultimate Fighter combatants Akira Corassani and Sam Sicilia square off in a featherweight throwdown.

Corassani is in an admittedly tough spot after losing his last two fights by TKO, but Sicilia is also looking for a much needed win after going just 2-4 in his last six fights.  Corassani's biggest problem lately has been his defense.  He's defending around 49-percent of the strikes against him, which usually lands him in a fire fight against his opponents.  Corassani is more than capable of putting someone's lights out, but his inability to avoid damage has cost him dearly in recent fights.

Sicilia is going to be a tough matchup considering the kind of sledgehammer he swings when coming after an opponent. Sicilia's record may reflect a few recent losses, but that doesn't mean he wasn't in the pocket looking for the knockout at every turn in each of those fights. Sicilia hits hard and hits fast, and with over 58-percent defense, he's getting hit less than Corassani.

This fight really comes down to who lands first and who lands hardest.  It's a toss-up in every sense of the word, but Sicilia holds a slight edge when it comes to fight finishing ability and that could make the difference in this one. 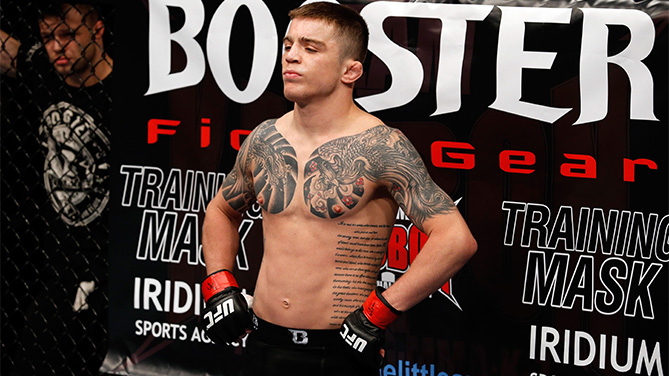 Another tough pick to make on Saturday night will be this matchup between British brawler Andy Ogle and UFC newcomer Makwan Amirkhani.

Ogle has been a tough fighter to predict since coming to the UFC, but following three losses in a row he's likely in desperation mode to get a win this weekend.  Ogle is a tough customer when it comes to striking in the pocket and looking for the knockout, but he's left himself open to counter attacks, which has resulted in his demise in several bouts.

Amirkhani is a solid prospect out of Finland with a history in wrestling, primarily Greco-Roman, which means he likes to work from the clinch and the body lock and that could bring him a lot of success in this fight if he can work Ogle against the cage and trip him up to take this one to the ground.  Amirkhani is still a work in progress when it comes to his striking, so chances are he will have to stick to his bread and butter to get the job done against Ogle.  If he can't get the takedown or somehow loses himself and decides to stand and bang with Ogle, this could be a bad debut for the Finnish fighter.

Still, the wrestling background does give Amirkhani the great equalizer in this fight and if Ogle extends himself too much looking for the knockout, he could give up the takedown instead.

These are the fights on the card that seem like a lock when breaking down the matchups.  This is MMA so anything can happen, but the odds are on these favorites to get the job done.

This welterweight matchup between Albert Tumenov and Nico Musoke isn't a sure thing, but this Russian prospect has all the makings of a Performance of the Night winner for this Sweden card.

Tumenov has picked up knockouts in each of his last two fights, including a Knockout of the Year candidate for his finish over Matt Dwyer last October.  The Russian is a boxing prodigy as well as a hand-to-hand combat champion in his home country.  Tumenov is going to be a fun fighter to watch develop in 2015 and his run should start this weekend in Sweden.

Musoke will be a tough matchup for anybody at 170 pounds, including Tumenov, but his inability to pull away from opponents has kept many of his bouts closer than they needed to be.  Musoke is a physically impressive fighter at welterweight, but everywhere he's good it would seem Tumenov is better.

Chances are somebody is getting knocked out in this matchup between Nikita Krylov and Stanislav Nedkov, but one fighter seems to have a distinct advantage when it comes to pure finishing power inside the Octagon.

Krylov has shown flashes of brilliance during his UFC career, with two separate TKO victories, including his last win over Cody Donovan in 2014.  Krylov is a powerful striker with an arsenal that includes solid boxing and a nasty head kick.  Nedkov has proven to be a tough customer as well during his career with plenty of TKOs to his credit as well, but the constant moves between light heavyweight and middleweight have dotted his UFC career with inconsistency.

This is bout on the undercard with the odds in favor of one fighter, but his or her opponent might just have the stuff to pull off the unexpected when the night is over. 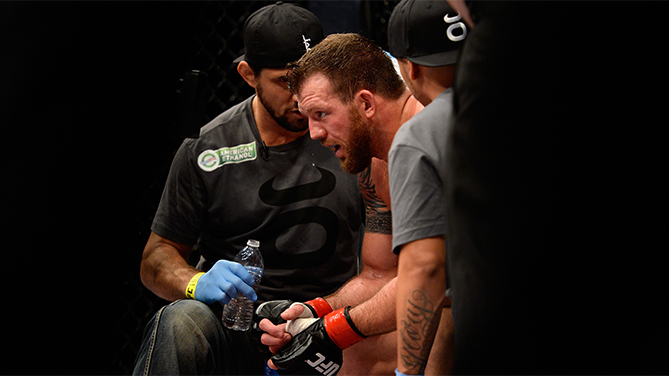 There's a lot on the line in this light heavyweight fight between Ryan Bader and Phil Davis, including bragging rights after a college wrestling matchup from years ago.  Both men were All-Americans in college, but it was Davis - a future NCAA champion - who beat Bader in their lone match while they were competing in wrestling.

This is Bader's chance at redemption.

In terms of mixed martial arts wrestling, Bader is Davis' equal in terms of his takedown prowess and defense.  Bader lands his takedowns with just over 44-percent accuracy and averages over three per fight.  But it's his defense that could be the difference in this fight, where Bader can force Davis into a striking war and that's a place where he can definitely win.

Davis has incredible ground control if he gets an opponent to the mat.  Glover Teixeira couldn't breathe for three rounds, as Davis put him down over and over again and kept a suffocating pace to keep the Brazilianfrom ever seeing daylight for 15 straight minutes.  Davis can make the best wrestlers in the world feel weak under him if he's on top, but the problem is he may not even get a chance to show that skill against a fellow grappler like Bader.

On the feet, the two fighters are much more evenly matched, with Davis showcasing a dangerous kicking game while Bader carries dynamite in his hands.  If Davis can't threaten Bader with the takedown, it might open up the boxing-heavy attack from the former Ultimate Fighter winner.

At that point, Bader just needs to follow the game plan set forth by Anthony Johnson when he stuffed Davis at every turn and lit him up on the feet.  Bader won't have the same speed or diversity in his striking as Johnson, but he can be just as effective if he stays patient and doesn't allow Davis to dictate the pace.

Head over to the UFC Fantasy page to make your picks for Fight Night Stockholm!