Get ready for UFC Fight Nights in Stockholm and Halifax by watching the superstars in some free fights! 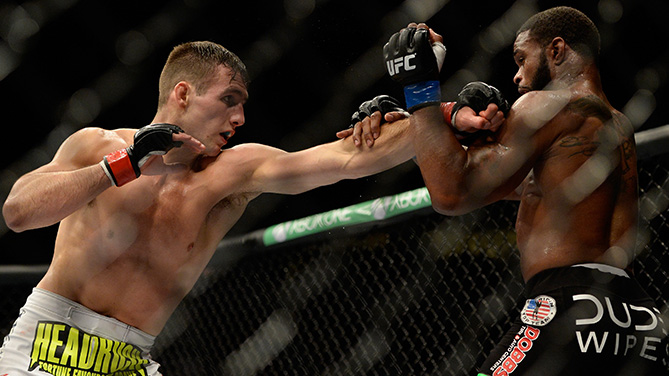 Rory MacDonald
25-year-old welterweight Rory MacDonald is a phenom in every sense of the word. The British Columbia, Canada native made his professional MMA debut at the age of 16 and got his first action in the Octagon against Mike Guymon at just 21 years old. MacDonald showed impressive resilience in his debut, finishing Guymon after getting dropped early. He immediately received a jump in competition in his next fight when he was slated to take on exciting welterweight Carlos Condit at UFC 115. Despite falling to Condit, MacDonald went on to win seven of his next eight fights, including victories over Nate Diaz, Mike Pyle, BJ Penn, Demian Maia, and Tyron Woodley. A win over former Strikeforce champion Tarec Saffiedine would make MacDonald’s bid at the welterweight title hard to ignore.

More: Submission of the Week: MacDonald vs. Guymon | KO of the Week: MacDonald vs. Mills
Tarec Saffiedine
Former Strikeforce champion Tarec Saffiedine is one of more talented strikers in the welterweight division and put his impressive hands in display in his UFC debut against Hyun Gyu Lim at Fight Night Singapore earlier this year. The Brussels, Belgium native landed 120 strikes, and passed guard six times after completing the only takedown of the night. The win propelled Saffiedine into the welterweight top 10 and a win over MacDonald could push him to the forefront of the title shot conversation.

More: Assuncao Keep Focus Where it Belongs
Gunnar Nelson
Gunnar Nelson enters his Fight Night Stockholm headlining bout on a 14-fight unbeaten streak and with three submissions in his four fights inside the Octagon. At just 26 years old, the Icelandic fighter already has recorded eight career submission wins and was awarded his Brazilian Jiu-Jitsu black belt by Renzo Gracie after impressive performances at the 2009 IBJJF Pan Ams and World Jiu-Jitsu championship. While he’ll undoubtedly need a couple more marquee wins to warrant a shot at the welterweight strap, defeating UFC veteran Rick Story should push the Nelson even higher in the 170lb. rankings.

More: Gunnar Nelson Pre-Fight Interview | Gunnar Nelson Like Father Like Son
Rick Story
UFC veteran Rick Story is only 30 years old but already has 25 professional fights under his belt, including 16 in the Octagon. During his time under the UFC banner, Story has become one of the most consistent fighters in the welterweight division. He has tallied 658 significant strikes in his UFC career, good for 5th most in welterweight history, and sits just 33 significant strikes away from passing third-place Thiago Alves. Story also holds the sixth most takedowns in welterweight history. And when “The Horror” finishes a takedown, it usually ends in a nightmare for opponents – as seen here in his UFC 103 bout against Brian Foster.

More: Fight Night Stockholm: Rick Story Gym Escape | Rick Story Pre-Fight Interview
Iliri Latifi
Sweden’s own Ilir Latifi has recovered nicely from his loss against Gegard Mousasi in his UFC debut back in April of 2013. The light heavyweight has posted back-to-back finishes, stopping long-time fighter Cyrille Diabate in London and newcomer Chris Dempsey. Next up for Latifi is another newcomer Jan Blachowicz, owner of a 17-3 career record. Latifi hopes to give Blachowicz the same warm welcome he gave Dempsey at Fight Night Dublin.