There is no better way to kick off 2018 than with this main event. Jeremy Stephens and Dooho Choi have lights out power and they’re not afraid to use it, but will we see the kind of explosive firefight their resumes promise? Choi said Stephens will turn into a wrestler once he hits him, and Stephens said he’s got more to his arsenal than just his striking. So, yeah, they’re going to throw, and while this one is unlikely to go five rounds, it’s going to be fun while it lasts.

Speaking of fun, how can you not love the co-main event between Uriah Hall and Vitor Belfort? Yes, Belfort isn’t the same fighter he was when he was 19 (who is?), but he’s still got fast hands and finishing power, and at this point, a statement-making victory could just be the perfect cap on an epic career. But Hall will have something to say about that, and getting a name like Belfort on his record could be the thing to send his confidence through the roof and make him a legit contender in 2018 and not just an erratic force of nature.

Making her first start since December 2016, competing in her first fight since leaving Team Alpha Male, and her first fight at 125 pounds, there are a lot of firsts for Paige VanZant this weekend, and that could be a bad thing for most fighters. But VanZant, who is used to the spotlight, has the character to put all those things aside and show up ready to fight when she has to. So it should just come down to the fight on Sunday, and while VanZant is the favorite, Clark is the bigger fighter physically and is coming off an upset win over Bec Rawlings, so fading under the glare of the lights isn’t likely to be an issue either, making this one of the toughest fights to pick.

He may have flown under the radar for much of his UFC career, but Kamaru Usman is a monster who we will be hearing a lot from in 2018 and beyond. He calls himself a problem and that may be the most accurate self-assessment I’ve heard in a while. His wrestling is top notch, and he showed off his heavy hands in knocking out Sergio Moraes in September, making him a bad matchup for anyone at 170 pounds. So does Emil Meek have a shot? Absolutely, and it’s not just because of his skill set. The key for Meek is his attitude, and if he can stay positive when or if things go south, he could make a late charge. But he’ll have to get to those late rounds first. 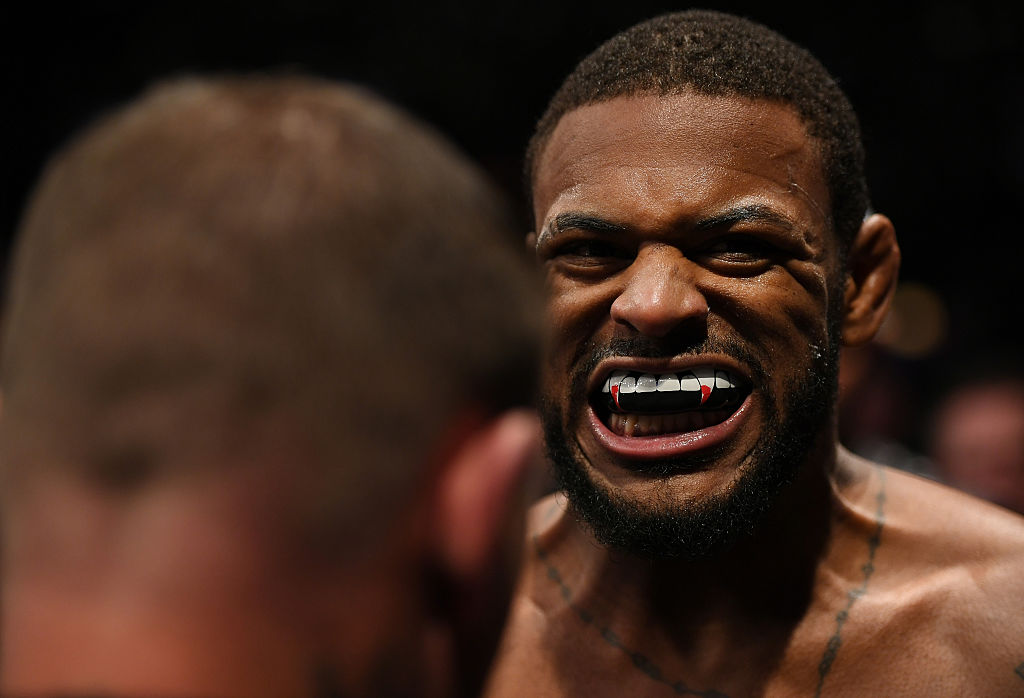 Michael Johnson is making his first cut to 145 pounds this week, and that’s miserable enough, but then the former lightweight contender will be in with one of the toughest outs at featherweight in Darren Elkins. Elkins is one of those guys that will make anyone rethink their life’s work, and when you add a weight cut into the mix, that makes Sunday’s bout quite interesting. But if that cut goes well for “The Menace” and he can get his strikes off from range, Elkins can get busted up and Johnson can pile up the points. Then again, when it comes to Elkins, the fight isn’t over until it’s over. Ask Mirsad Bektic.

It’s Missouri vs Missouri in this lightweight bout between James Krause and Alex White, and beyond local bragging rights, this is a fight that can turn on a dime depending on which version of each fighter shows up. If Krause is on, he should rightfully be favored, but White is an underrated talent who has shown flashes of brilliance. If we get more than a couple of those flashes, White could pull off the upset.

Strong Island is represented once more in the Octagon, as Matt Frevola makes his UFC debut against Mexico’s Marco Polo Reyes. Fresh from a win on Dana White’s Tuesday Night Contender Series that earned him his contract, Frevola is a well-rounded prospect who has the potential to make some noise in the Octagon in the coming years. But Reyes will definitely give him a test.

After a failed experiment at 155 pounds, Thiago Alves returned to welterweight and looked good in defeating Patrick Cote last April. Sunday will be the real indicator as to whether that fight marked a new title run for the “Pitbull” or not. Zak Cummings is kind of in the same boat as far as his immediate prospects for 2018, and after paying his dues over the last decade, he’s in position to win a big fight and start making some moves. Stylistically, the result may be determined by the location of the fight, with Alves holding the edge on the feet and Cummings on the mat.

Call me crazy, but Sunday night should show off the Jessica Eye everyone got excited about when she entered the Octagon for the first time in 2013. If you never saw her on the local circuit, Eye had crisp striking, a good Fight IQ and she won 10 of 11 fights. Her UFC run has been less than stellar, but those fights all took place at 135 pounds. This weekend, she returns to flyweight and when she faces tough Brazilian Kalindra Faria, this is her chance to not just snap a four-fight losing streak, but to get a fresh start in a division she has the talent to be a champion in.

One of the best fighters in the UFC with an 0-2 Octagon record, Irene Aldana is always a threat to pick up a Fight or Performance of the Night bonus, and as Brazil’s Talita Bernardo looks to earn her first UFC victory, she’ll be bringing it against the Mexican battler, and that’s just the way Aldana likes it.

Another tough one to pick here in the strawweight division, as Danielle Taylor tries to make it three in a row against JJ Aldrich. Aldrich has a well-rounded attack that was on display against Chanmi Jeon in June, but the always busy Taylor has the kind of style that can break any opponent’s rhythm and turn the outcome into her favor.

The UFC debut is always a tough hill to climb, and when you get the obstacles Mads Burnell and Mike Santiago faced, it gets even tougher. Burnell, a natural featherweight, moved up to 155 pounds for his short notice debut against the huge Michel Prazeres, and Santiago also took on his first UFC bout on less than a full training camp against phenom Zabit Magomedsharipov. They both lost, but this weekend, they’ve got the right time and right weight class to get down to business and really show what they can do.

With Kyung Ho Kang out since 2014 and Guido Cannetti out since 2015, who knows what either bantamweight will be showing up with on fight night? But with each fighter coming off wins and eager to get back to active duty, there is no more important bout for either fighter than this one.