It was a night filled with upsets when the UFC landed in South Dakota for the first time, as a slew of underdogs pulled off victories in the special Wednesday night card from Sioux Falls.

John Lineker proved to be one of the biggest winners of the entire night after he pulled off a spectacular first-round knockout over former bantamweight title challenger Michael McDonald in the main event.

Lineker was giving up a little bit of size and reach to McDonald, but none of that mattered once the powerful Brazilian got inside and uncorked a huge right hand that sent the former title contender backwards towards the mat.

McDonald recovered from that initial shot, but Lineker's assault continued and he finally uncorked a left hand that crumpled his opponent down to the ground again. This time, Lineker had no intention of letting McDonald recover because he poured on the punches until referee Herb Dean swooped in for the stoppage.

The co-main event featured the most lopsided odds of the entire card, with a whopping 95 percent of players picking Tony Ferguson to beat late replacement Lando Vannata. The entire fantasy player pool nearly got turned upside down after Vannata landed a head kick in the first round that nearly finished the No. 3 ranked contender and had the Sioux Falls crowd on its feet.

Ferguson restored order with a much stronger second round before finishing Vannata with a D'arce choke to get his eighth consecutive win overall.

Much like Lineker in the main event, Tim Boetsch came in as a slight underdog to Josh Samman on Wednesday night, with only 44 percent of players picking him to win, but the veteran middleweight put on a masterful performance to get a second-round TKO finish. 61 percent of players who picked Boetsch believed he would get the finish by knockout and that's exactly how he put Samman away in their middleweight showdown.

Another upset occurred in the heavyweight fight on the main card as Daniel Omielanczuk got a majority decision over Aleksei Oleinik after three rounds. Only 30 percent of players picked Omielanczuk to win the fight, with an overwhelming 70 percent going with Oleinik.
Omielanczuk out powered Oleinik over three rounds while busting the Russian's face repeatedly to earn a decision victory, just like 55 percent of players picked him to do. 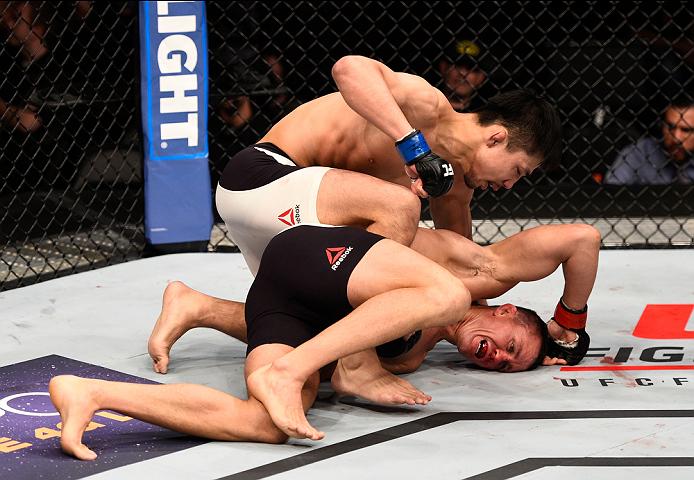 Keita Nakamura was a huge underdog in his fight with Kyle Noke, with only 21 percent of players picking him to win, and yet he got the job done with a late second-round submission of the veteran Australian. Nakamura was such a huge underdog that he accounted for 175 bonus points for the players who picked him, and the Japanese welterweight came through in a big way with his performance over Noke.

Katlyn Chookagian kept the upset trend going after only 31 percent of players selected her to beat veteran Lauren Murphy, but the New Jersey native used an aggressive striking attack to rack up enough points over three rounds to get a decision victory.

While upsets seemed to rule the day for UFC Fight Night in South Dakota, there were still plenty of favorites who came away victorious as well.

Louis Smolka had 63 percent of fantasy players on his side as he took out Ben Nguyen in “Ben 10”s hometown, while Sam Alvey had a whopping 84 percent of players selecting him to get a victory over former Ultimate Fighter competitor Eric Spicely.

Scott Holtzman also had 73 percent of players picking him to beat Cody Pfister and that's exactly what he did with a unanimous decision victory to move his UFC record to 2-1.

From top to bottom, six underdogs - according to fantasy players - came away victorious in what ended up as a very fun fight card capped off by Lineker's stunning knockout over MacDonald.