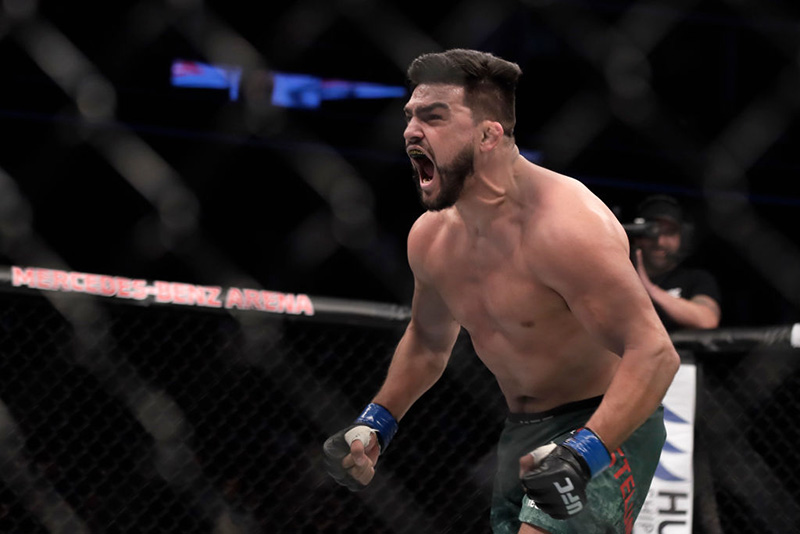 Kelvin Gastelum celebrates during the UFC Fight Night at Mercedes-Benz Arena on November 25, 2017 in Shanghai, China. (Photo by Hu Chengwei/Getty Images)" align="center" /> Saturday’s UFC Shanghai event is in the books, and now that the fighters are off to their next adventure, it’s time to go to the scorecard to see who the big winners were at Mercedes Benz Arena.

1 – Kelvin Gastelum
When talking to Kelvin Gastelum before his Saturday win over Michael Bisping, the topic of him moving from middleweight back to welterweight came up, and he admitted that while he still had some unfinished business at 170 pounds, he knew that the more that he kept winning at 185, odds were that he would stay in his current division. Well, knocking out the former middleweight champ in less than a round is a pretty good indication that Gastelum’s title run will come at 185, and if he has his way, that shot at the belt will take place early next year against interim titleholder Robert Whittaker. It’s impossible not to like that fight, and if “The Reaper” needs a dance partner, why not Gastelum, who looks like he can hang with – and potentially beat - anyone in the weight class. 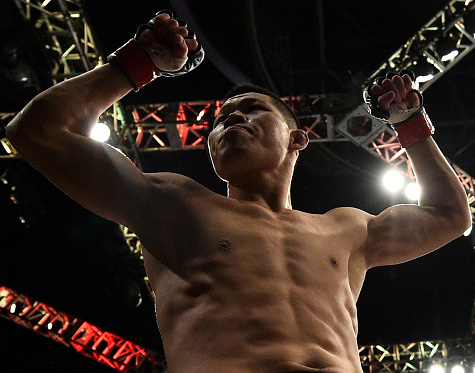 Zak Ottow on Nov. 25, 2017 in Shanghai, China. (Photo by Brandon Magnus/Zuffa LLC)" align="left" /> Criminally underrated for a while now, it’s at the point where no one can ignore Li Jingliang any longer, especially after his fourth consecutive win (and second consecutive bonus) against Zak Ottow on Saturday. With the pressure on him fighting in front of his home country fans, two of whom were his wife and daughter, Li delivered his fourth KO as a member of the UFC roster, and if he’s not knocking people out, he’s engaging in Fight of the Night-worthy battles. It’s time for a top 15 opponent for Li, and don’t be surprised if by this time next year he’s creeping into the welterweight title picture. 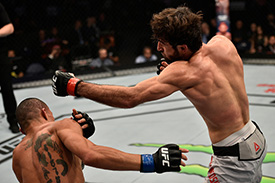 Sheymon Moraes on Nov. 25, 2017 in Shanghai, China. (Photo by Brandon Magnus/Zuffa LLC)" align="left" />After back to back wins over Mike Santiago and Sheymon Moraes, if Zabit Magomedsharipov isn’t on your short list of favorite new UFC fighters, why the heck not? That’s it. Simple question. Because I can’t see how anyone can watch the dynamic Dagestan native do his thing on the feet and the mat on fight night and not just say, ‘Ah, so that’s what MMA is all about.’ Magomedsharipov is fun to watch, he’s seemingly fearless out there in terms of his willingness to try anything to get the win, and he’s always looking to finish. I’d put him in with anyone in the featherweight division right now, and while he may not beat everybody, I’d give him a damn good shot at doing it, and oh what fights they would be. 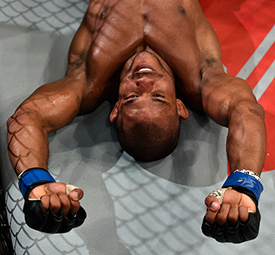 Muslim Salikhov on Nov. 25, 2017 in Shanghai, China. (Photo by Brandon Magnus/Zuffa LLC)" align="left" />I always felt Alex Garcia had the potential for big things in the UFC. He had fight-finishing power, the ability to compete anywhere, and the athleticism to get himself out of trouble if necessary. But since an explosive debut against Ben Wall in 2013, we’ve only seen glimpses of that potential. Saturday’s win over highly regarded newcomer Muslim Salikhov may have been a turning point for “The Dominican Nightmare,” though. Sticking to a rock solid game plan, Garcia dominated Salikhov before finishing the bout via second-round submission, and if he can keep this momentum going, he’s going to be a threat at 170 pounds. 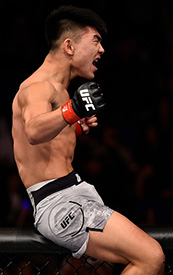 Bharat Kandare during the UFC Fight Night event inside the Mercedes-Benz Arena on Nov. 25, 2017 in Shanghai, China. (Photo by Brandon Magnus/Zuffa LLC via Getty Images)" align="left" />As I noted last week’s Fight by Fight preview, sometimes the first-time UFC jitters don’t register when you’re a seemingly invincible 19-year-old. Well, that was precisely the case with China’s Song Yadong, who looked like a seasoned vet in breaking down, then finishing, fellow newcomer Bharat Kandare in a single round. Showing off both striking and a submission, Song also has a charisma that will serve him well in a growing MMA scene at home. If he continues to stay focused while evolving his game, he may join Li Jingliang as China’s first two UFC stars.