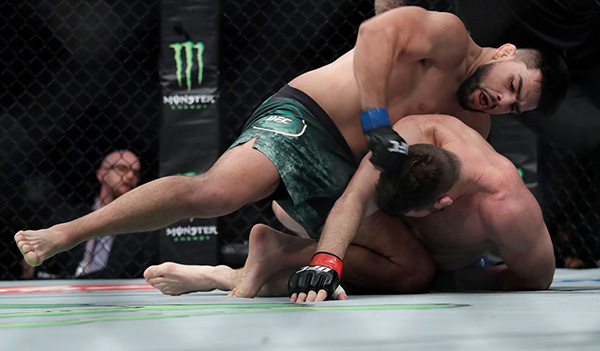 Kelvin Gastelum fights with Michael Bisping during the UFC Fight Night at Mercedes-Benz Arena on November 25, 2017 in Shanghai, China. (Photo by Hu Chengwei/Getty Images)" align="center" /> In front of a sold out crowd that packed Mercedes Benz Arena for the UFC's debut card in Shanghai, China, Kelvin Gastelum sent a strong statement to the rest of the middleweight division as he knocked out former champion Michael Bisping with a jaw-dropping left hand in their main event matchup.

Gastelum was the aggressor throughout the fight that only lasted two minutes and 30 seconds, as he stalked Bisping around the Octagon, first targeting the body and then looking to connect to the head. 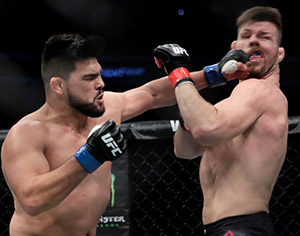 Bisping stayed calm and composed as he attempted to fire back with his counter shots while using his reach advantage against Gastelum, but he just never found a home for his best punches.

Ultimately, it was Gastelum's speed and head movement that ducked Bisping's last attempt to land a shot and that's when the former Ultimate Fighter winner unleashed a right hand followed by a left hook that absolutely demolished the 38-year old veteran from England.

Bisping crumbled to the mat as referee Marc Goddard rushed into stop the fight and Gastelum picked up the biggest win of his career against a former UFC champion.

Heading into Saturday's card, Gastelum was a solid favorite according to selections made by fantasy players, with 60 percent predicting his victory and another 73 percent correctly calling his knockout against Bisping.

In the co-main event, local favorite Li Jingliang made short work of Zak Ottow to lock up his fourth straight win while getting the crowd in China on their feet with his handiwork. Li was definitely a heavy favorite going into the fight, with 70 percent of fantasy players picking him to beat Ottow in the welterweight matchup.

Newcomer Wang Guan will have plenty of attention the next time he fights after he dismantled Alex Caceres over three rounds to earn a victory on Saturday despite only 21 percent of fantasy players picking him to win. Wang also earned the players who picked him an extra 40 points because it was his first fight in the UFC.

Alex Garcia earned arguably the biggest win of his UFC career with a rear naked choke finish over highly touted prospect Muslim Salikhov in the opening fight of the main card. Garcia was selected by 68 percent of fantasy players while going up against knockout artist Salikhov, who starts off his UFC career on a loss.

On the preliminary card, Zabit Magomedsharipov put on another stellar performance as he submitted Sheymon Moraes with a third-round anaconda choke to move to 2-0 in the UFC. The Russian fighter who trains with the likes of Frankie Edgar and Edson Barboza was selected by 77 percent of fantasy players going into Saturday, as he looked outstanding yet again. 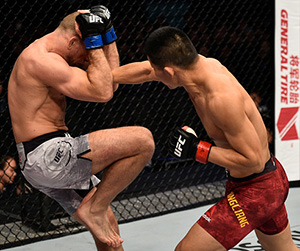 In one of the biggest upsets on the entire card, Song Kenan needed just 15 seconds to put away Bobby Nash by knockout in the first round with only 19 percent of fantasy players picking him to win. The players who selected Song will also enjoy an extra 40-point bonus, as this was his UFC debut.

Another upset took place in the women's strawweight division as newcomer Yan Xiaonan defeated Kailan Curran by decision with only 27 percent of fantasy players picking her in the fight. Yan's win also accounted for an extra 40 points for her debut and then another 120 points because this was a tight matchup on paper going into Saturday's card.

19-year-old fighter Song Yadong made quite an impression in his debut with a first-round submission over Bharat Kandare, with 54 percent of fantasy players picking him to win. Much like Yan, Song earned an extra 40 points for his debut and then another 120 points because it was a tight matchup.

In the heavyweight division, Shamil Abdurakhimov returned from a long layoff and quickly finished Chase Sherman with a first-round knockout despite only 29 percent of fantasy players picking him to win. Abdurakhimov also earned those players an additional 120 points because it was also a tight matchup going into Saturday's event.