Fight Night Seoul: By The Numbers

Take a closer look at UFC Fight Night: Henderson vs. Masvidal in this edition of By The Numbers. 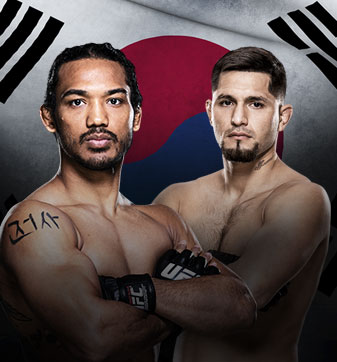 170
Pounds’ division that Henderson successfully moved up to with a fourth round rear naked choke over Brandon Thatch in February, which earned a Fight of the Night bonus

3:28:28
Total Octagon time for Henderson across 11 fights at 155 pounds including 8 decision wins, 6th most in UFC lightweight history

683-364
Significant strikes landed by Henderson in the UFC versus sig. strikes absorbed

26
Takedowns by Smooth as a UFC lightweight

24
Of those takedowns Henderson started from within the clinch

11
Career KO/TKOs by Jorge Masivdal including his most recent UFC welterweight debut KO of Cezar Ferreira in July, which earned a Performance of the Night bonus

52
Significant striking accuracy percentage by “Gamebred” against Ferreira at welterweight, UFC average is 42%

6-2
UFC record by Masvidal as a UFC lightweight

13
Fighters in UFC history have recorded a submission win via D’Arce choke including Masvidal’s use of it against Michael Chiesa at UFC on FOX: Johnson vs. Moraga

7
Current ranking of Dong Hyun Kim as a UFC welterweight

939
Total strikes landed by Stun Gun inside the Octagon, 9th most among UFC welterweights

8
Submission attempts by Kim, tied for 9th with Roan Carneiro for most among active UFC welterweights

79
Inch reach by Waters, which will be a 3 inch reach advantage over Kim